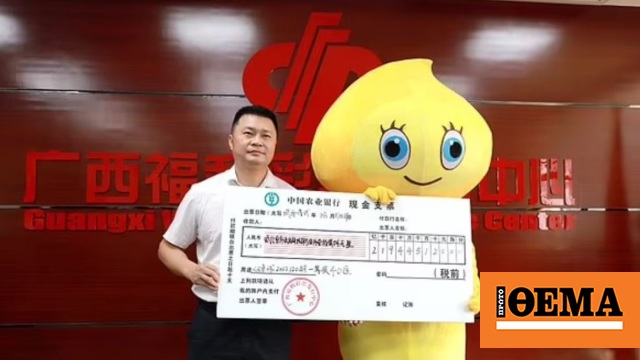 A man from China hid a secret from his wife and child who won it lottery something more than 3 million euros. The reason he did this was because he was afraid that they would become lazy if they knew about money.

To protect his anonymity, the man, nicknamed “Mr. Lee”, appeared dressed in a yellow outfit reminiscent of a cartoon character to collect his winnings.

Mr. Lee said he was excited about the winnings, but wanted to hide his identity and keep it from his wife and child that he had won such an exorbitant amount.

“I didn’t tell my wife and child for fear that they were too complacent and wouldn’t work or work hard in the future,” The man told Nanning Evening News.

“Mr. bought me 40 cards and each had the same seven numbers.

After the man realized that he had the winning numbers 2, 15, 19, 26, 27, 29 and 2, the man said he went to collect his winnings. The man stayed in a hotel over the weekend before amassing his winnings.

“I didn’t leave the hotel because I was afraid he would lose the lottery if I went out” He said in his remarks.

After collecting the amount after taxes, the man said he had donated a large amount to charity and had not yet decided what to do with the rest of the money.

Mr. Lee said he had been playing the lottery for over a decade and had only won a few dozen yen. He said his previous strategy was to pick a new set of numbers each time, but he chose to stick with a set of numbers he played a few years ago.

The Chinese government organizes the National Lottery to raise funds for social welfare and cultural programs. Winners are taxed on their winnings.


Shakira: Skipping the “queue” to enter the “Tower of Terror” first


Weather: The temperature of mercury will rise today to 27 degrees