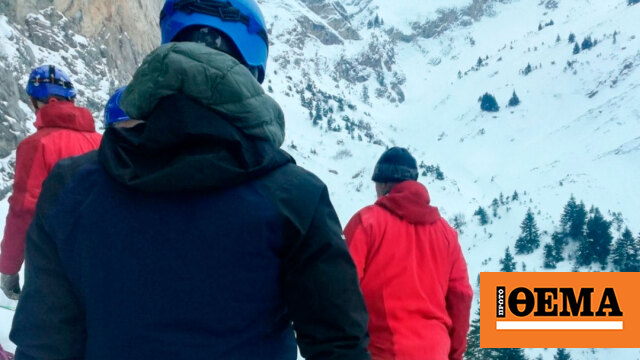 First information about the unfortunate Climber Where fell into a ravine to do Olympus He lost his life as a result shortly before conquering the summit of Mytikas, SKAI reported.

According to the report, he is 41 years old Athena According to the same source, experienced ClimberHe alerted authorities when he was found passed out in the ravine, as was his friend they had boarded.

is now expected to be determined with PostmortemAn autopsy will be conducted in the next few hours to determine if the unfortunate climber took his last breath from the fall or if he “ran” from the cold.

Sad incident The incident happened on Sunday (25/12) around 1:00 pm when two climbers were at Luki site in Mydika at an altitude of 2,700 meters.

Just then, one of the two went to the top and the other decided to wait for him at the same point. However, when the first man from above returned, he found his friend missing, and after searching the surrounding area and the “Apostolidis” shelter, signaled that he was missing.

Efficient services were immediately mobilized Climber With instructions from the EOD of Thessaloniki, investigations began at a specific point where the accidents occurred. After a long descent down hard terrain with frozen snow, he found his friend passed out and notified authorities.

On Monday (26/12) morning weather conditions ended the extremely difficult operation, with firefighters attending the operation reaching the unfortunate climber and recovering his body from a parked Super Puma helicopter. And the man was taken to the heliport of the 24th Litochoro regiment, where he was received by an ambulance of the EKAV.

See also  When will the Ukraine war end?

Qatargate Money Trails, The Bugs and Web of 12 NGOs

New Year’s Eve will be historically warm – when will the weather change?

The Legend of Rolex – Billionaire Profits and Secrets