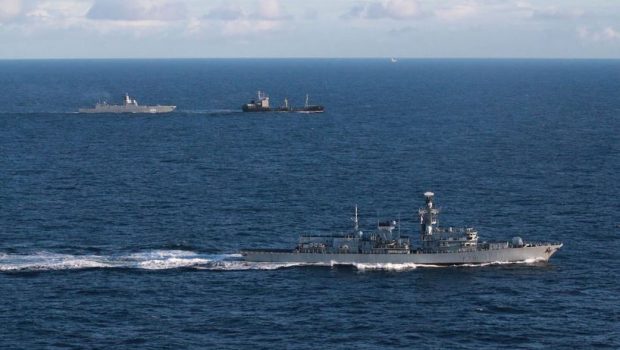 Russian warship, “Admiral Gorshkov”, armed with b Hypersonic missilessailing close to Britain and already watched by the Royal Navy.

The news was written by The TelegraphNoting that the British forces had left the Plymouth shipyard on patrol the previous Saturday. The Russian ship sailed there from the North Sea with a supply tanker escorting it. It is watched from a distance by the frigate Portland and other NATO forces. All warships sail in international waters.

The British ship’s captain told the Telegraph: “With a constant and constant presence, the Royal Navy ensures compliance with maritime law while at the same time deterring malign activities, defending the interests of the nation. The sighting of the Russian frigate, which took place alongside forces from our NATO allies, demonstrated Britain’s commitment to the Atlantic alliance and the preservation of On safety at sea.”

Royal Navy warship @employee The Russian guided missile frigate Admiral Gorshkov and its escort tanker, the Kama, are being tracked as they sail in international waters near the United Kingdom.

The British wrote that Putin sent “Admiral Gorshkov” last week on a week-long voyage. It is expected to conduct exercises, including training the crew to develop hypersonic weapons and long-range cruise missiles. Last week, on a conference call with Igor Krokhmal, the ship’s captain, Putin said he was putting the ship on “combat duty”.

According to The Telegraph, “The move was seen as an attempt to divert attention from Russia’s military failures in Ukraine. Putin did not assign the ship a specific mission, merely saying that it would help protect Russia “from potential external threats” and that it would “advance national interests.” Departing from its home base in the Barents Sea, sailing off Britain, and heading for the Atlantic Ocean with a view to entering the Mediterranean and Indian Oceans.