In its more than 112 years of existence, it has been Alfa Romeo Select a unique sports character that will express itself through races, but also through production cars. Some of them have rightfully earned the name supercar.

Ultimate performance, distinctive design often combined with exotic options and limited production also forces an extremely high purchase price. Supercars are a special class of cars They are a select few of the manufacturers that he approached.

The Alfa Romeo He is one of them, enjoying the privilege of being One of the brands that though has based its existence on mass productionHer personality, her technological innovations and of course her racing successes, They’ve let her create some of the most interesting supercars along the way.

From 8 c A game-changer in the 1930s, dazzling 33 stthen eccentric Montreal And the SZ / RZ And even nostalgic 8c contest These are her supercars Alfa Romeowhose brilliance is kept unaltered by the Heritage Department of Stellantis.

In the early 1930s, it was Alfa Romeo It was already enjoying great success in racing as well as in sales thanks to the 6C series. Based on this, the brand management asked him Genius engineer Vittorio Jano To develop stronger – this time too 8 cylinder in line– A group that will offer a range of high-performance luxury cars. It didn’t take long to create the new group, as a year later Jano essentially added two more cylinders to the 6C engine, increasing the displacement to 2336 cc. Create a new legend. 8C 2300 was a fact And despite the fact that the engine capacity was only 30% larger than that of the 6C 1750, Output nearly doubled to 155 horsepower, instead of 85. The 8C’s racing success came immediately, with Tazio Nuvolari winning the 1931 Targa Florio. Dozens of victories They will follow At Mille Miglia, Monza, but also at the legendary Le MansThe 8C 2300 Le Mans special edition weighed just 1,000 kg and had a top speed of 200 km/h. In the 1931 race, Alfa Romeo won. The following year it finished first and second, while in 1933 the victory took on epic proportions, with 8C 2300 Le Mans taking all three podium spots and the 1934 model taking one final victory.

Of only the 188 8C 2300s built, 9 were Le Mans versions, with one preserved to this day by Stellantis’ heritage department.

At first , Alfa Romeo The 8C series was intended exclusively for racing, but soon He started selling chassis and mechanical parts to private individuals who dressed themselves with the help of such manufacturers as Zagato, Carrozzeria Touring, Carrozzeria Castagna and Carrozzeria Pinin Farina. The lucky owners of this racing-born supercar include Baroness Maud Thyssen of the Thyssen family, Piaggio founder Andrea Piaggio and racing legend Tazio Nuvolari.

The story of the 33 Stradale also begins with racing. Family “33” was born in Mid sixties In order to control the matches. Over time, it gained many members, mostly healthy racers, while a series of prototypes highlighted the model’s adaptability, as well as the creativity of the designers. The 33 Stradale was without a doubt the most stylish and elegant example of the familywith its unveiling in August 1967 as captivating as nothing else offered in the automotive industry up to then. 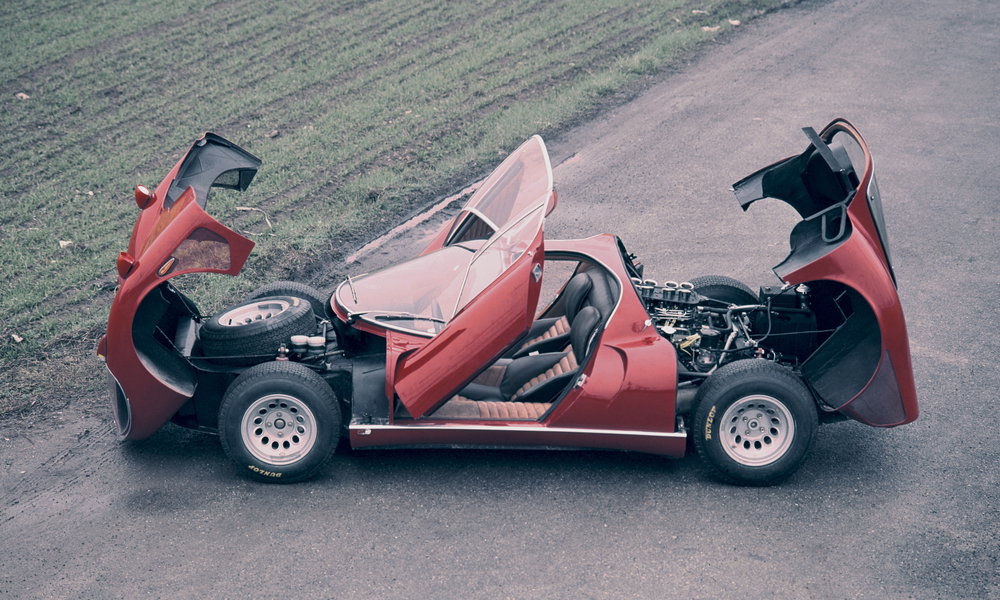 Its ingenious design is Created by Franco Scaglione of Florence, who used all his technical knowledge and aesthetic daring. The result is the same A true masterpiece in terms of style, aerodynamic performance and functionality. Also 33 Stradale is f Technically innovativesince cFor the first time in a road car, the doors opened upwards, which allows easy access to the vehicle, which does not exceed 1 meter in height. The body nearly chokes the tubular steel frame and 2-liter naturally aspirated V8 engine in aluminium-magnesium, with the aerodynamic silhouette combined with the 230 hp of the engine and the extremely light weight (about 700 kg) ensuring The maximum speed is 260 km / h and acceleration from 0-100 km / h in 5.5 seconds. 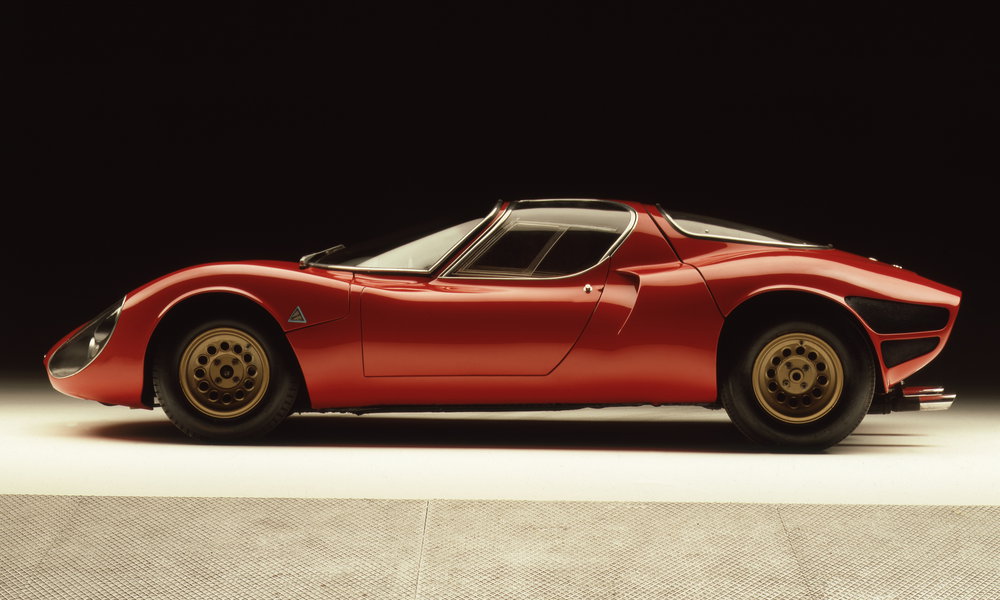 Just 18 Unique 33 Stradalis bornEach one is a little different because their construction is handcrafted. With an emphasis on proportions and volumes, strict lines and an imposing presence defined by elegance and balance rather than an easy impression, 33 Stradale is a real supercar It is a timeless symbol and a perfect example of his philosophy Alfa Romeo. 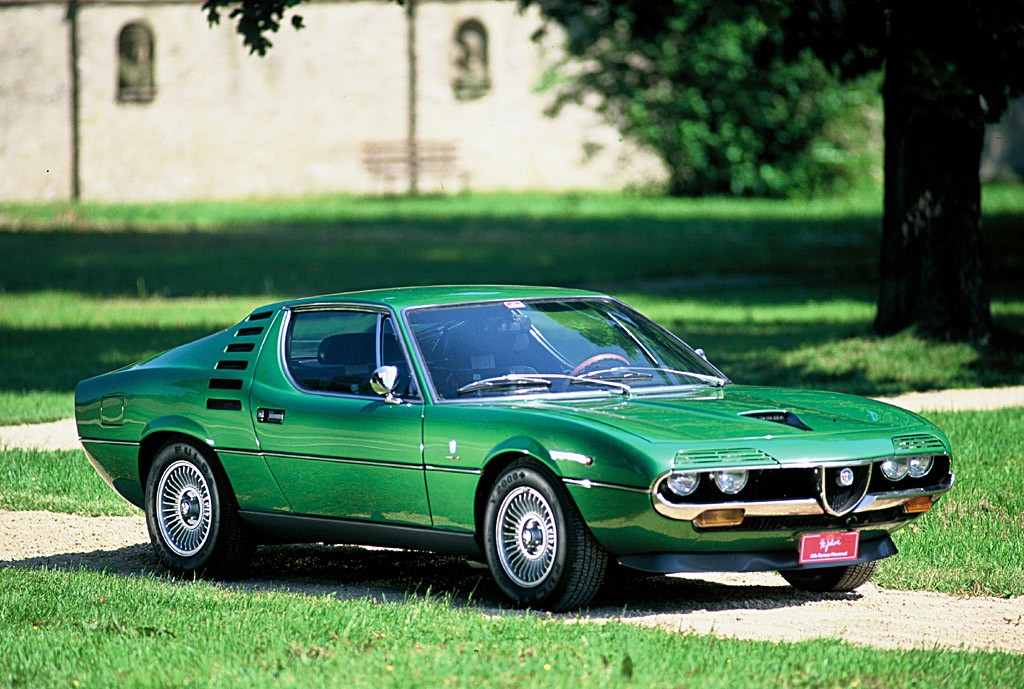 Montreal – The Future and the Performance (1970)

The Montreal poses A unique example in the history of Alfa Romeo supercarsin the view that it was born not through the search for the ultimate performance, but through another area in which the brand excels: style.

In 1967, at the Montreal World Fair, the organizers chose her Alfa Romeo among all manufacturers to create a vehicle that expresses “the modern motoring man’s highest expectations”. 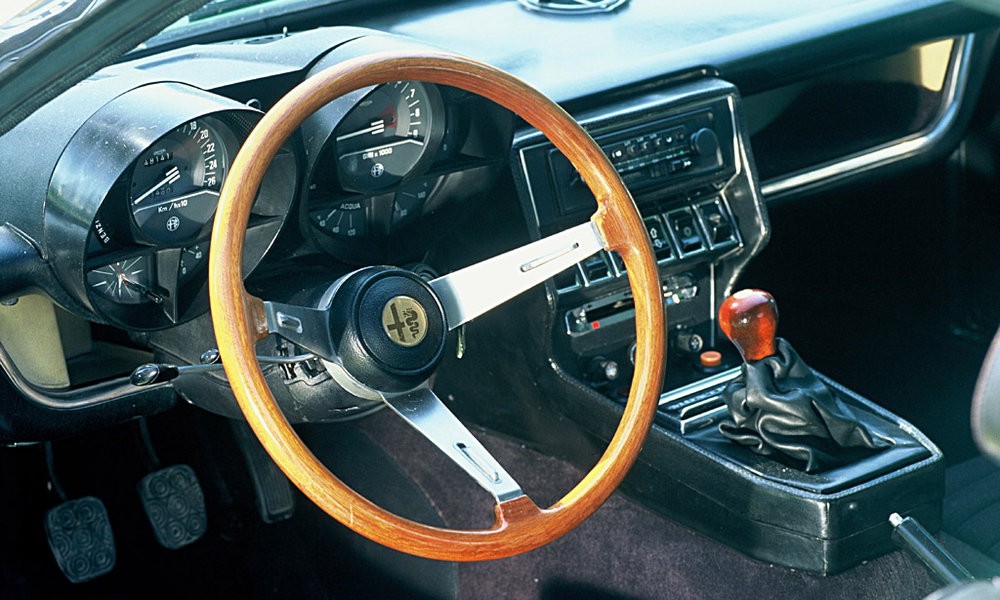 In Bertone’s studio, he’s still a design genius, Marcello Gandini, then 29 years old, designed a low, elegant and aerodynamic coupe. The originality of the design was largely due Low front grille and hood that partially covered the headlights under a series of ‘eyelashes’which, among other things, improved aerodynamic performance. 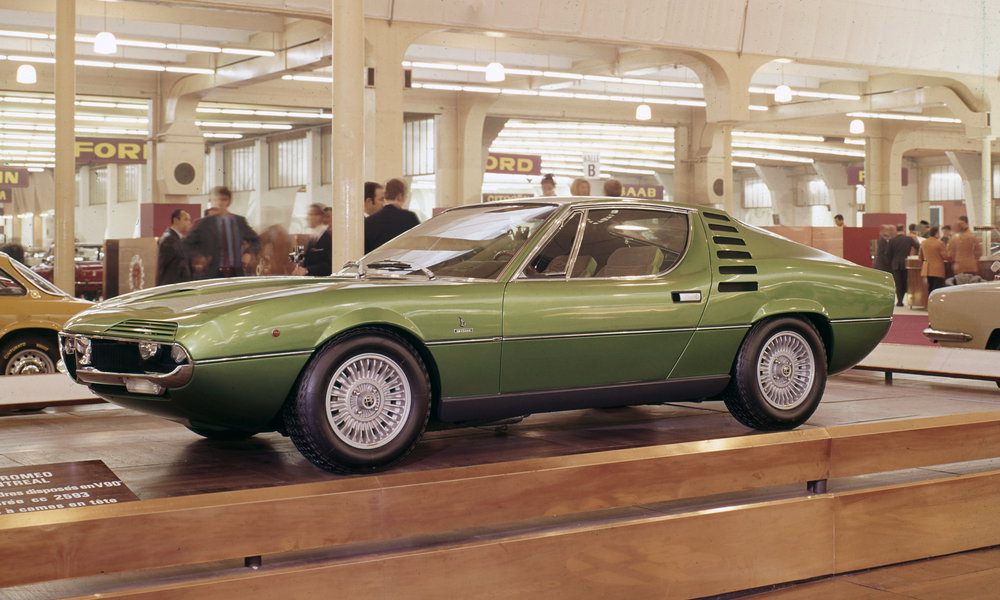 The Steep windshieldThe L-shaped doors and six air intakes on the rear pillars It was some of the design elements that have evolved into a true legend in the field of automotive design. In a production car to fit the V8 engine from the 33 Stradale, Marcello Gandini had to raise the bonnet, but without “damaging” the aesthetic integrity of his original creation. From 1970 to 1977 a total of 3,925 Montreals were builtwith its busiest supercars Alfa Romeo To this day he remains fascinated by her futuristic approach to performance.

SZ is designed to attract attention And he did not hide it. Low, with a wedge-shaped shape and a very high line in the profile that separates the glass surfaces from the metal surfaces (belt line), the SZ was the result of an ambitious program titled ES30 (Experimental Sportcar 3.0 L). 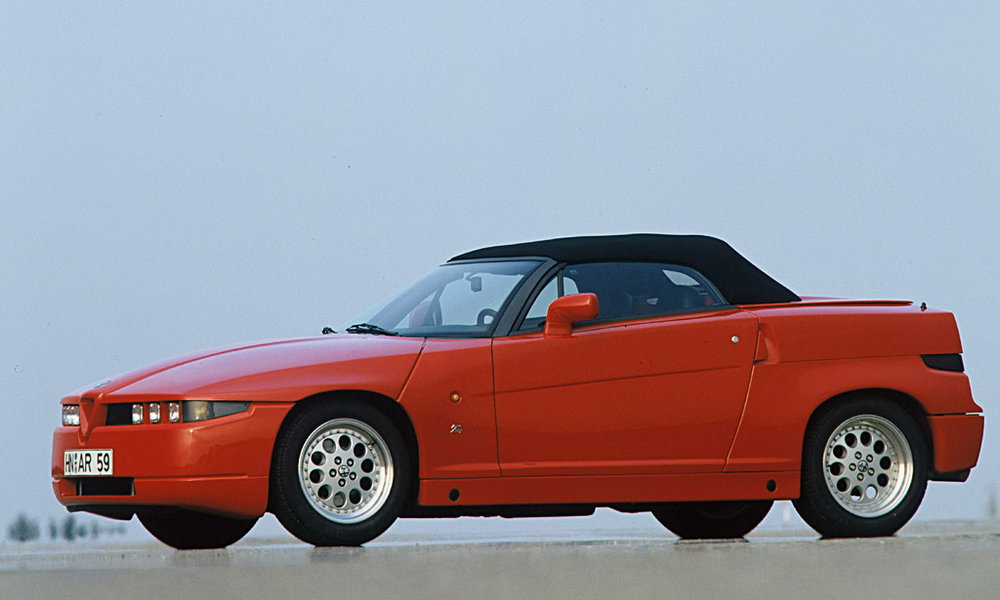 Synthetic body cladding for the legendary V6 “Busso” which also supplied the 75 3.0i Quadrifoglio Verde for 1987. For this occasion the performance was just fine 207 hpIt is connected to the rear wheels via a 5-speed gearbox mounted in front of the rear axle. Total production of nearly 1,000 units included equally Special and rare RZ (Roadster Zagato). 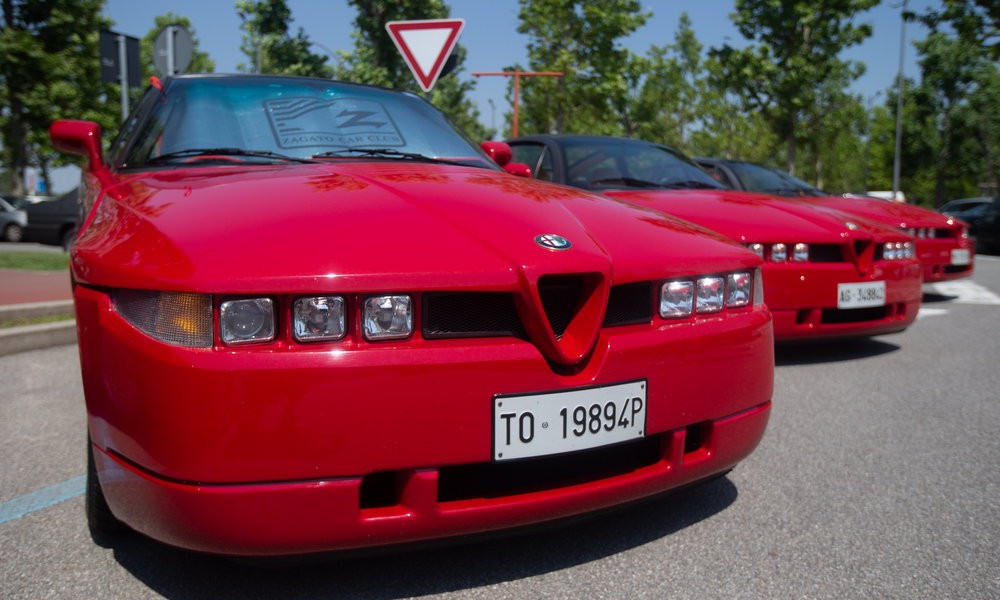 The SZ/RZ are truly supercars, not only because of the performance or innovative technologies used during design and production, but because they manage to challenge in every guise. Also on a design level, one can still see their influence through A new bright signature of the 3 + 3 lighting bodies that characterize the Tonale, as well as the new Giulia and Stelvio.

The spirit of the legendary 33 Stradale in terms of aesthetics is even more evident in the 8C Competizione, despite the years separating them from their different structures. The 8C Competizione is a supercar that follows a front- and rear-engine layout, with power transmitted via a transmission. The presentation of the 8C Competizione prototype at the 2003 Geneva Motor Show left no one untouched, essentially forcing the brand to go ahead with limited production of the model designed by then-president Centro Stile. Alfa RomeoWolfgang Egger.

Only 500 units were built at the Maserati factory In Modena – as it will happen in a few years with the 4C – with The car is a mixture of exotic components. The frame came from Dallara, Brembo signed Formula 1-inspired braking system, and Sparco built the seats out of gorgeous leather-covered carbon fiber. 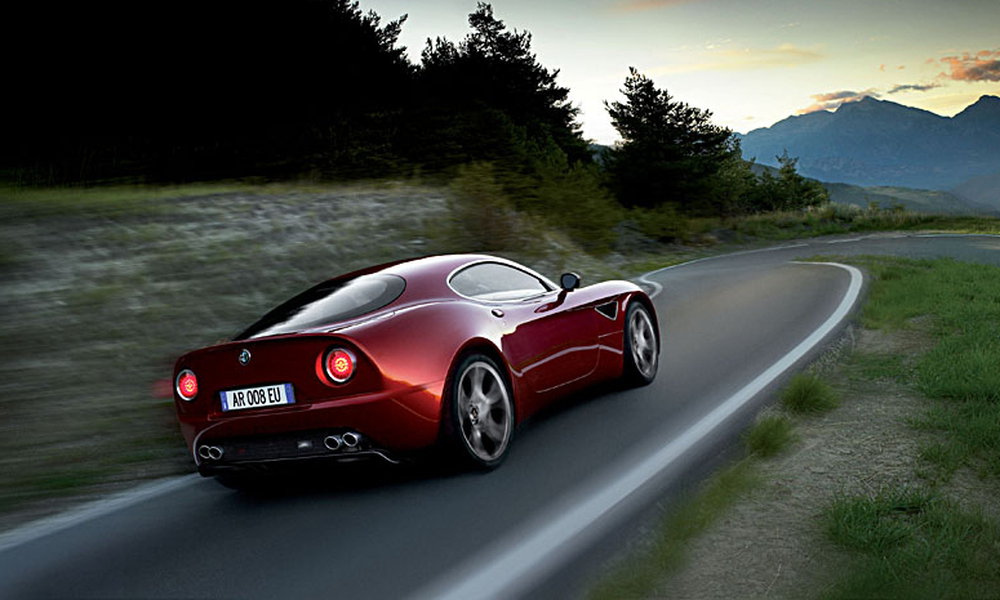 Another point that fully justified the supercar designation was Ferrari’s signature naturally aspirated V8. The 450 hp They gave the 8C Competizione a top speed of almost 300 km/h and acceleration from 0-100 km/h in less than 4 seconds. The success of the 8C Competizione led to the creation of Open version, 8C Spider which was also built in 500 units. With the corresponding mechanical parts, the performance was equally boisterous, and despite a slightly lower top speed, the 8C Spider had no less charm than its closed-roof “sister”.

Also read:
The Alfa Romeo we want today in the garage (+ video)
This is the fastest Alfa Romeo Giulia
MAT renews the Holy Grail for Al Romeo

See all the latest news as it happens newsauto