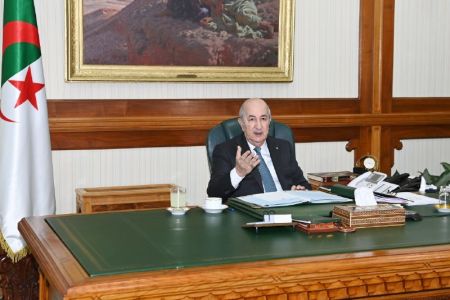 Algeria is strengthening its response, unlike Spain, on the issue of Western Sahara. After recalling its ambassador in Madrid, Algeria announced on Wednesday, June 8, the suspension “immediately” Treaty of Friendship, Good Neighborliness and Cooperation concluded in 2002 with Spain.

Algeria “Decided to proceed with the immediate suspension of the Treaty of Friendship, Good Neighborliness and Cooperation concluded on October 8, 2002 with the Kingdom of Spain, which determined the development of relations between the two countries”, Algerian presidency.

The Spanish-Algerian Treaty provided for the strengthening of political dialogue between the two countries at all levels, and the development of cooperation in the economic, financial, educational and defense fields.

His suspension was announced at the end of a meeting of the Algerian Supreme Security Council chaired by Algerian President Abdelmadjid Tebboune (photo), motivated by Madrid’s support last March for the Moroccan autonomy project for Western Sahara, a non-independent country. The area has been disputed for decades between Morocco and separatists from the Algerian-backed Polisario Front.

“The Spanish authorities have engaged in a campaign to justify the position they have adopted on Western Sahara in violation of their legal, moral and political obligations as the authority administering the territory that burdens the Kingdom of Spain until the decolonization of Western Sahara. Declare its achievement by the United Nations”, Explanation of the Algerian presidency.

In addition to suspending the treaty, Algeria decided to freeze its trade with Spain. The Algerian Association of Banks and Financial Institutions (Abef) announced in a letter addressed to all banking institutions in the country, Freezing of bank positions for foreign trade operations of products to and from Spain From this Thursday 9 June.

After the suspension of the Treaty of Friendship, Good Neighborliness and Cooperation between the two countries#Algeria and the#SpainThe Association of Banks and Financial Institutions informs the banks of the decision to freeze direct debts for foreign operations to and from Spain. pic.twitter.com/a3pFc2sPLk

This new episode of spat between Madrid and Algiers concludes nearly three months of tension between the two countries. On March 18, the Spanish Prime Minister, Pedro Sanchez, angered the Algerian authorities by declaring that the autonomy plan for Western Sahara proposed by Rabat in 2007 was “The most dangerous, realistic and credible basis for conflict resolution”. This position represents a startling reversal, given that Spain had until then advocated neutrality between Morocco and the Sahrawi separatists in the Polisario Front.

| “The Spanish government regrets the announcement by the Presidency of the Algerian Republic of its decision to suspend the Treaty of Friendship, Good Neighborliness and Cooperation.” pic.twitter.com/CAh3xYIUWU

This change of position put an end to a diplomatic crisis between Rabat and Madrid sparked by Spain’s reception in April 2021 of the leader of the Polisario Front, Brahim Ghali, for treatment there of Covid-19. During this crisis, Spain accused the Moroccan authorities of using “Illegal immigration as a weapon of pressure”, By allowing the arrival of more than 10,000 migrants within 48 hours thanks to the relaxation of controls at the maritime borders.

07/04/2022 – Morocco-Spain: Prime Minister Pedro Sanchez expected in Rabat to improve relations after a year of tension

See also  Show at the heart of the solution against stagflation, David Malpass*