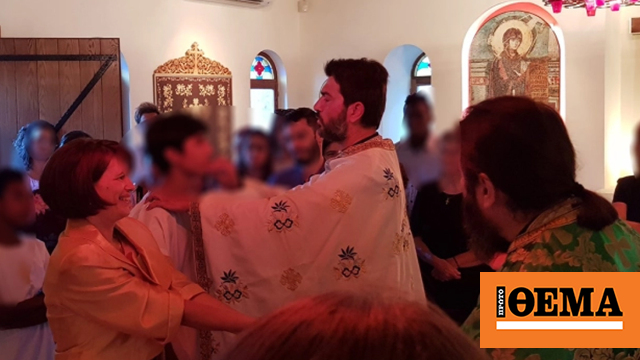 At a time when parents report illegal baptisms of their already baptized children to church branches “The ark of the world” by Father Antonio Most of the time with Amman “Mama-press” Stamatia giorgantisProtothema.gr brings to light a photo album of the group naming mysteries that took place inside the villa on September 22 and 23, 2018 – donated by flour manufacturer Konstantinos Loulis – in Timini, Volos.

As stated “The ark of the world» In a post on his Facebook page, the nine children were baptized in Holy Baptism. Their new names This creates incredible questions that, after many complaints of beatings and neglect, the NGO’s founder and his people are asked to address.

“Baptized into Christ, you breathed into Christ, Alleluia…” In an atmosphere of deep joy and emotion, the entire family of Kivotos gathered with great joy on Saturday 9/22 and Sunday 9/23. Of our 9 children in a group baptism at our home in Volos.

With the help of Jesus Christ, the other 9 children of secular birth, after great zeal and desire for our faith, themselves heard the enlightenment of the mystery of divine baptism-rebirth and rebirth, and received new names. :

Marios – Aristotle
Salvation – Kosmoula
Marianthi – Anna
“According to the post, first, all these are not first baptisms.The ark of the world“, in 2016, they were held in Bogoniani of Ioannina and in the camp of Rafina, secondly, the children already had their own names, for unknown reasons Father Antonios and the elder did everything to change them. As can be seen in the photos, except for the children of the structure, both in the sacrament and the reception that followed Many were invited to participate in the baptism.

They revealed in a mega statement on Thursday (24/11) the question of their children’s second baptism. parents Reprimanded its head the ark And his partners, although their children already have Christian names, they also go to a new mystery. In fact, they mentioned that they gave the children a second name, while they did not even ask their parents for permission.

“Knowing in the first moment where I was, they gave the child a different name and a false statement. The child was baptized with the name “Georgios” and still has this name. He has problems, maybe because they called him Michalis, then he became George, He has various psychological problems because he seems to be split many times,” said the mother of the three-year-old boy. Megha.

At another point, mother The boy’s report that a social worker appeared at the prosecutor’s office to baptize his child with false documents and pretended to be missing. “At one point I read the paper and it had her (the social worker’s) name on it. She had correctly written that the mother had disappeared, they didn’t know where we were, and the little one had to be baptized.

Police raid the Ark of the World in Kalamata

110 am US UAVs Larisa – they monitor the entire Aegean