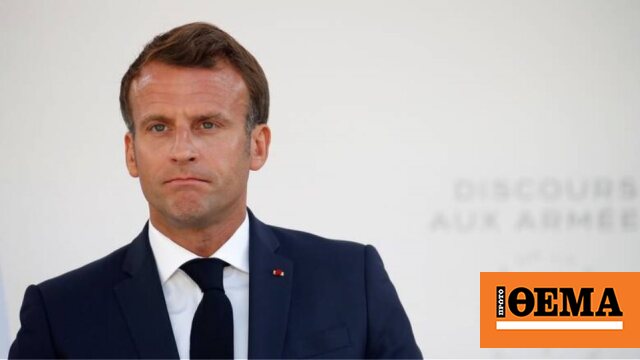 the France’s Kurds She was the target of a heinous attack, the president said Emmanuel MacronIn a tweet, after a gunman killed three people in a Kurdish community center in central Paris a few hours ago.

«France’s Kurds have been targeted in a heinous attack in the heart of Paris. Our thoughts are with the victims, the people fighting for their lives, and their families and loved onesMacron said in office.

France’s Kurds were the target of a heinous attack in the heart of Paris. Thoughts for the victims, for people struggling to live, for their families and loved ones. Recognize our law enforcement for their courage and coolness.

Battlefield in the French capital
Demonstrations have erupted in Paris since then armed attack By a 69-year-old man with the victims, three members of the Kurdish community. Events broke out in the French capital, where protesters gathered at the scene of the tragedy and clashed with police forces.

a #Paris 10While investigators and scientific technical police are still working at the crime scene #shootingIndividuals violently attack police officers by turning the street into a battlefield.
All our support to the police who restore order. pic.twitter.com/srFzgEeQfZ

Paris is like a battlefield, while dozens of policemen have been injured.

Police forces used tear gas to disperse a crowd of Kurdish demonstrators near a Kurdish cultural center in central Paris, in front of which the attacker killed three people. The events began when the crowd ran into a cordon of security forces protecting French Interior Minister Gerald Darmanin, who arrived at the scene.

the Security forces fired tear gas at the demonstratorswho in turn threw objects in their direction, burned trash cans and set up barricades.

Watch live: Protests take place at the site of a shooting near a Kurdish community center in Paris in which three people were killed – https://t.co/gMZligHlKO https://t.co/OlWwZsoqA9

The three dead are from the Kurdish community

Alert – very violent clashes are in #Paris 10 after departure @employee who was speaking after the Kurdish Center was shot.

A policeman was wounded and tear gas and shells were fired. pic.twitter.com/vsMPSx2ad3

a #Paris 10While investigators and scientific technical police are still working at the crime scene #shootingIndividuals violently attack police officers by turning the street into a battlefield.
All our support to the police who restore order. pic.twitter.com/srFzgEeQfZ

“Frozen” the world community is watching its history Bloody attack in Paris. David Adich, a lawyer for the Kurdish Center where the attack took place, told Reuters that the three dead were members of the local Kurdish community. Earlier, a gunman opened fire on one of them Kurdish cultural center And in a Kurdish café near central Paris, three people were killed and three others were injured.

According to two police sources, the suspect was arrested after the shooting in #Paris 10 Friday is known for two murder attempts in 2016 and December 2021.

The reason for the “racist act” is caught between the lines of the investigation that explain his act pic.twitter.com/Gsytxi4WoR

#Paris 10 : The Kurdish community expresses its anger after the attack on the cultural center, where it reported 3 deaths, according to the latest report pic.twitter.com/ur11anRpFm

🔴 Alert information – #shooting to me #Paris Tensions continue around the neighborhood #Knot by security perimeter.

Prosecutors said they considered a racial motive for the attack.

After the shooting that left 3 dead and several victims, Dingyin Street in #Paris 10the perimeter is completely cordoned off by the police.
📍 live @employee ⤵️ pic.twitter.com/8FI3ACToe1

The moment the 69-year-old girl was arrested

Judicial sources say that the 69-year-old “was recently released from prison. His case was tried and he was convicted, but he was released after an appeal.”

Three dead and two injured in the terrorist attack on 10th Avenue d’Engineen in Paris. The Cultural Center #Kurdish Ahmed Kaya was targeted. The man, in his 70s and far right, had already attacked a migrant camp in Paris one summer last year. Thoughts for our Kurdish friends 🙏 pic.twitter.com/1aPlyH1i5K

According to a representative of the Paris Public Prosecutor’s Office, two other people suffered minor injuries, while the attacker was also hit in the face.


Although the 69-year-old perpetrator of the attack in the 10th arrondissement of the French capital was arrested and the weapon with which he spread death was confiscated, the area remains cordoned off.

At the moment it is also being considered whether the case should be described as terrorist in nature and should therefore be taken over by France’s counter-terrorism service.

its goal attacks The 69-year-old was triple according to the mayor of the 10th arrondissement of Paris, Shooting They approached a Kurdish cultural center, a restaurant, and a hairdressing salon.


The 69-year-old man who shot him has French citizenship. Retired from the French Railways Federation (SNCF), where he worked as a driver, and was born in 1953 in Montreux, in the department of Saint-Denis.

Eyewitness He said the 69-year-old stormed into the Kurdish Cultural Center and opened fire before heading to a hair salon. Another eyewitness stated that “people were in a panic and shouting ‘He’s here, he’s here, come’ pointing to the hairdresser”. “I saw people on the ground with leg wounds, I saw blood, people were shocked and panicked,” the same witness added.

“We heard gunshots. We saw people running left and right. Five to six minutes later, we entered a hairdressing salon to save ourselves,” Ali, who was an eyewitness to today’s tragedy in the 10th arrondissement of Paris, told BFMTV.

In a post on Twitter, the mayor of the French capital thanked the police “for their decisive intervention during the horrific attack” and expressed his condolences to the families of the victims.

Thank you to the police for their decisive intervention this morning during the terrible attack on the 10th. Thoughts for the victims and their families. We are on their side. A psychic dungeon will open in the town hall of 10 people.

Eleon: The Gang Rape File – “We started three months ago, and others have had it too”

The dead man, a 30-year-old woman, had her poop inserted from a traffic accident with Greeks in Romania.