How the hell do you set out to write a review for a game belonging to a franchise that I’ve loved so much since I was a little kid? As you know, this test is often stressful, especially when you have decided and concluded that you like to “talk” to the reader/viewer more as a player rather than a critic. After all, I live this medium first and foremost as a player, which is why I will never be able to get rid of this germ. Because… “they are us” at last!

So before I get started, let me pass on my thoughts about Back to Monkey Island For you, I have to cut out my past in order, so that you also know what is at stake in this text after all. In the early 90s, in the small town of Aridaia, the first computer education program was opened. As kids at the time, my brother and I were both enrolled in his classes and we were excited every time we went to classes. Within the Studies program there were also free hours for playing games.

Therefore, we are all young people reverently squeezing these machines down to the last available minute of available time. Doom, Heretic, Wolfenstein, Mortal Kombat and a hacking game, which most children found boring and useless, as there were no killings, no action, but dialogues (which, of course, we had to understand). This game was called Secret Monkey Island. Believe it or not, I finished this game in that little room of the Aridaia tutorial, and since then the love has begun I wish I could find the words to describe you correctly, but it’s too hard for me.

So Monkey Island, to me, is neither a good nor a bad game. It is a wonderful and beautiful childhood memory of the most beautiful years of my life. Returning to Monkey Island is nothing more than a complete stopping point that Ron Gilbert has wanted to put in the series since 1992. If you haven’t been in touch with the series and haven’t tried it over the years, I guess it’s pointless to even tease her with her now, and I don’t finish reading this script. Unfortunately, Monkey Island are “mini” toys, “seed” toys that grow inside us as we grow, but they assume they’ve been growing all along. I could be wrong, but I get the impression that they are unable to charm anyone now. 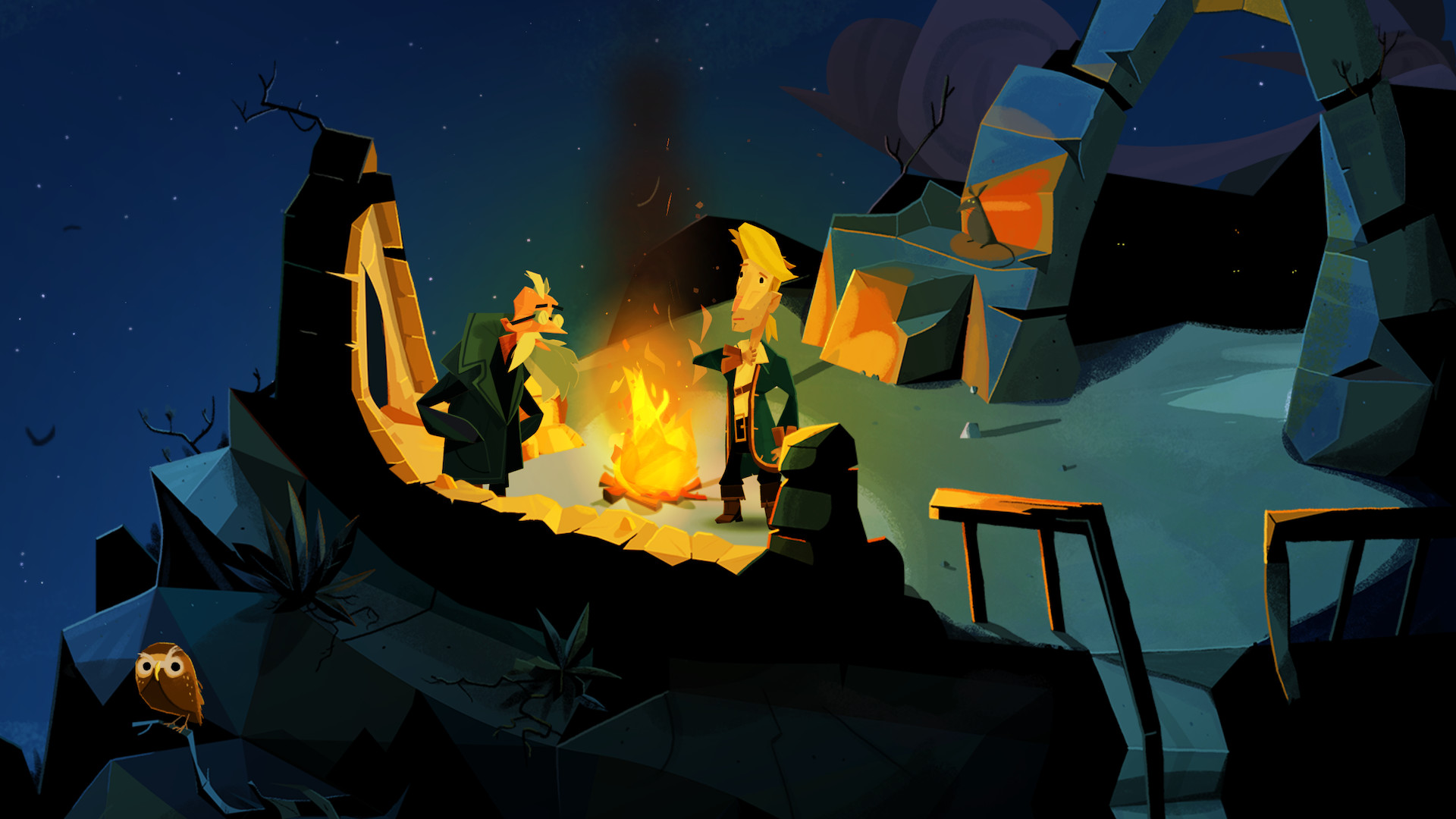 Return to Monkey Island is the sixth chapter in the series, but is theoretically a sequel to Monkey Island 2: LeChuck’s Revenge. Of course, Gilbert called it a “formless” sequel because the title actually takes into account a lot of the events that happened after the second act. For the record, Ron Gilbert co-created the first two games and wasn’t much of a role in the next, so he wanted to finish the Guybrush Threepwood story the way he started it, and I can only be happy with this development.

The player again wears the boots of the naive and immature blond pirate who always grows where he is not planted. Guybrush sets out to find the secret of Monkey Island and it seems he won’t give up until he does. So we find it in another adventure full of adventures, which is the starting point of the famous Mili Island. From there you will begin another crazy journey of fatal problems and errors that only Guybrush can spoil. 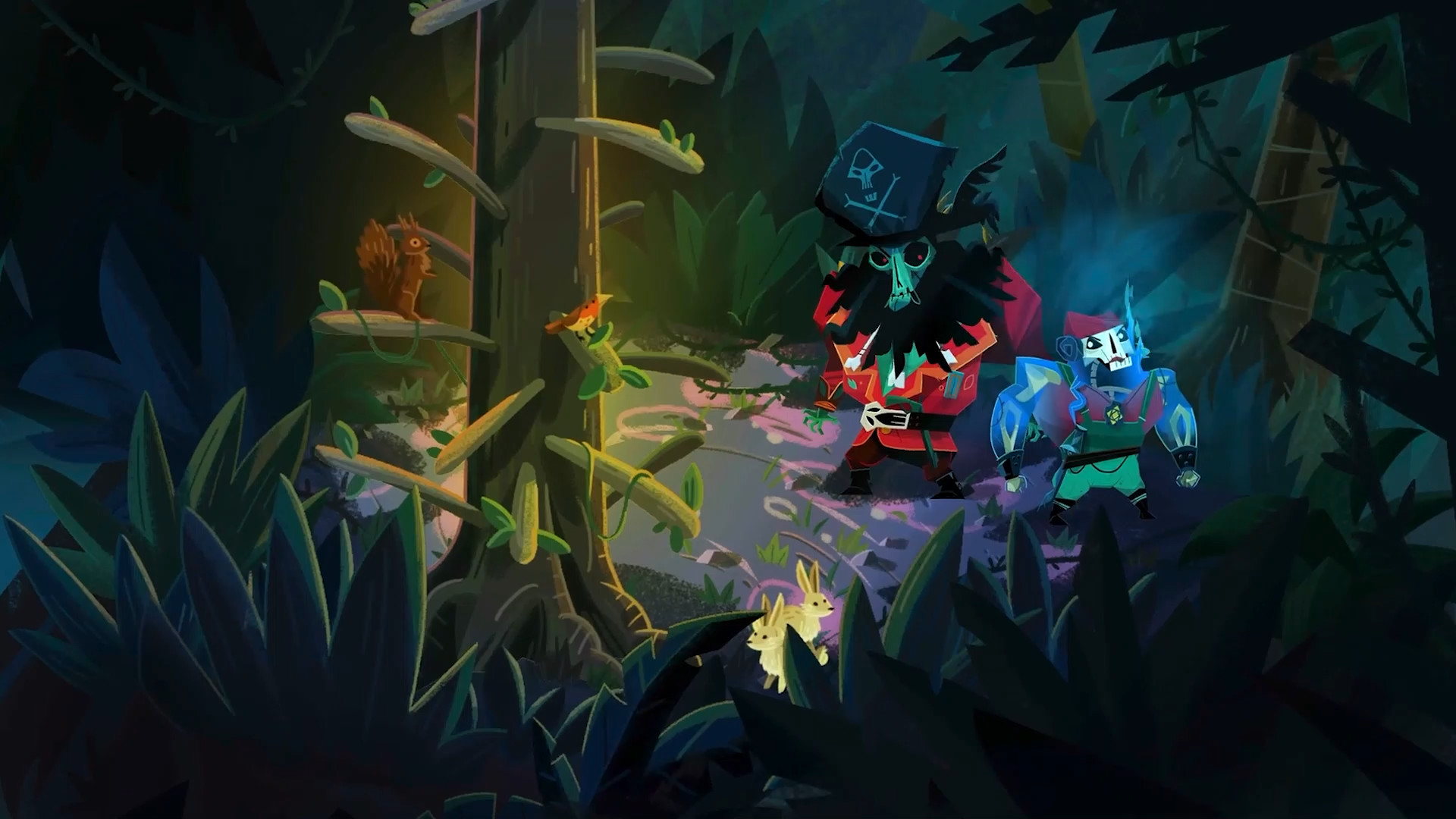 Throughout his 9-hour journey, the “Great Pirate” at our heart in a fascinating way meets almost all the familiar characters of the series, from Eileen Wally, to the god-mad Murray and Stan. In search of the “secret” of Monkey Island, he of course has a LeChuck at his feet (or vice versa) and the beef between them seems more playful than ever now that both sides have accepted their cohabitation.

In the game, the player will visit familiar locations such as Melee Island and of course Monkey Island, but there are some new islands that add to the list of Guybrush travel destinations such as “Brrrr Muda Island” and “Terror Island”. One of the complaints I have is that staying on each island was not accompanied by a pleasant duration, because I quickly threw many away without enjoying or discovering them as much as I would have liked. 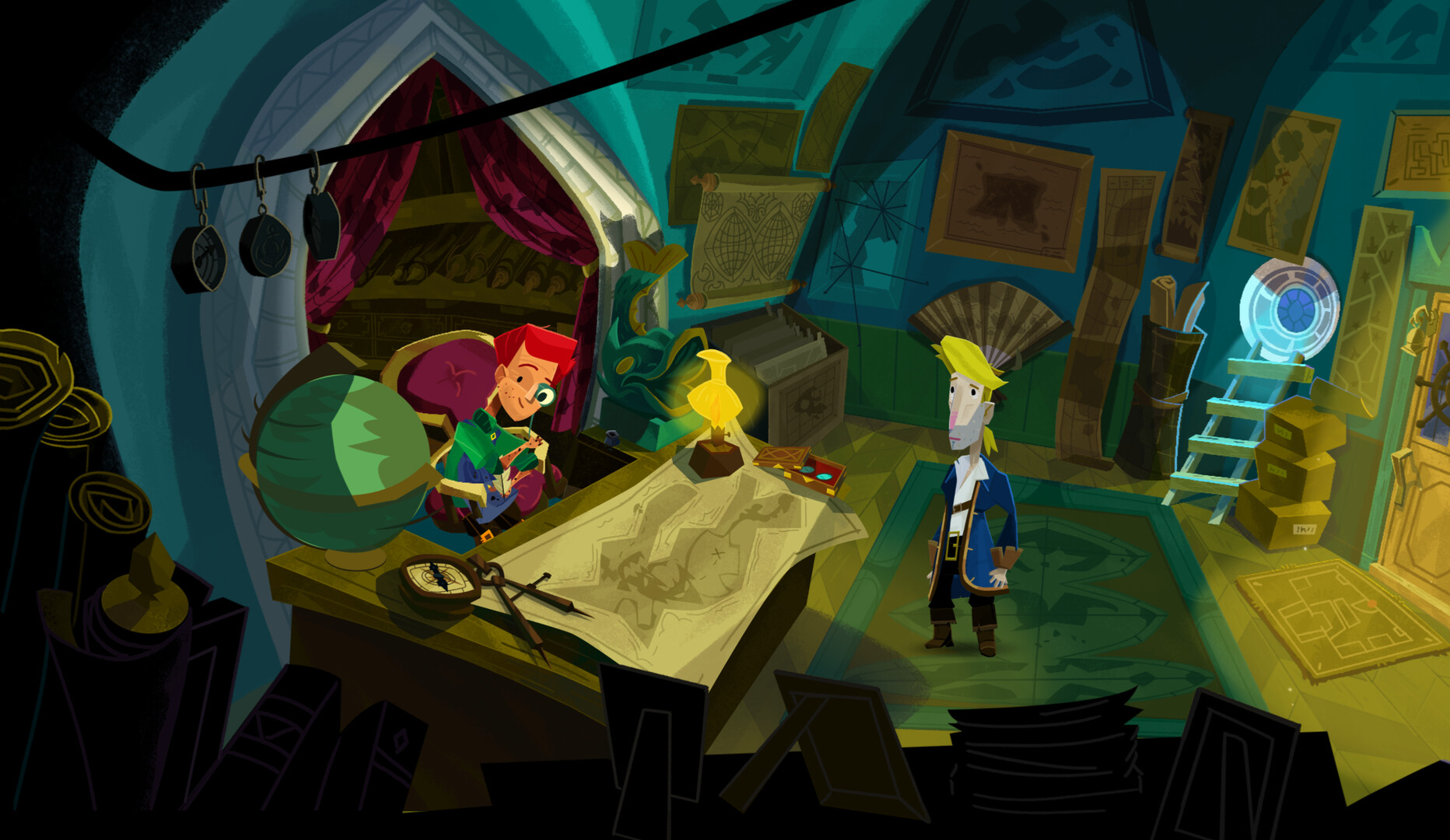 In terms of story, there are absolutely no serious requirements on Monkey Island. All there is is slow progress and always a quiet conquest of the target. Return to Monkey Island has exactly these elements, except that its ending is special. It’s an ending that clearly screams “I can’t stand crying goodbye, so goodbye” and I’m leaving it here so you don’t spoil it for those who haven’t completed it. Would I have loved her more creatively in her plot? I’d like to. Will I like it richer in terms of plot, in terms of twists and surprises? I also love that. He’s not disappointing, but he’s not a triumphant enthusiast either. It is just acceptable.

See also  Crafty as a fox: the 2024 Ford Mustang has a hidden recoil feature

In terms of gameplay right now, we’re taking on another tap and click game from Gilbert and his company. The player will have to comb rooms and areas for clues, talk to NPCs, study and combine items in their inventory, and everything else that comes with a point-and-click adventure game. The puzzles aren’t the best I’ve come across in Monkey Island but they certainly aren’t the worst. Often simple logic should be used, while sometimes a little “monkey island imagination” is required, so the situation with puzzles is balanced. 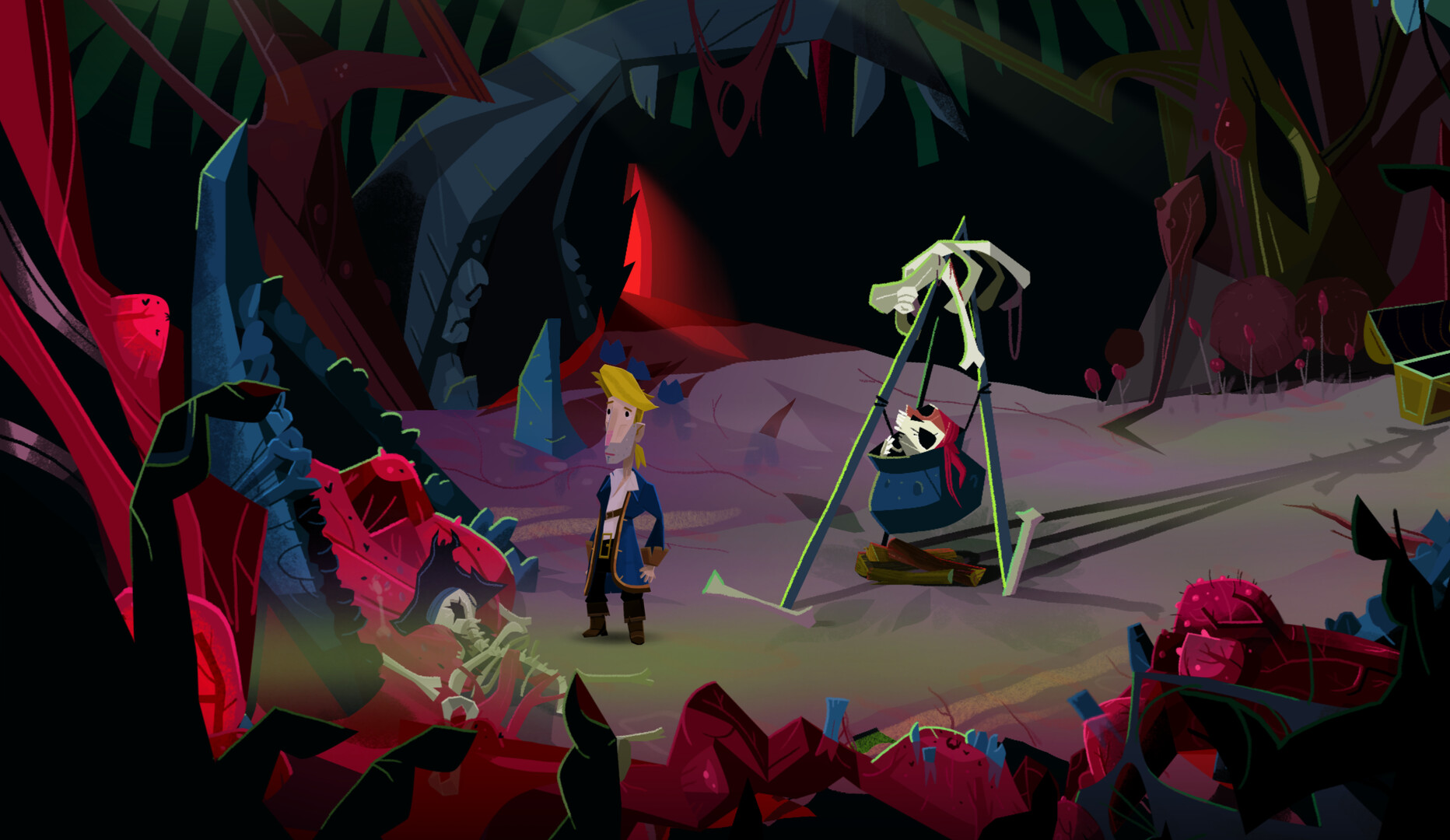 I was spoiled a bit by the fact that there is a hint book where the player can refer to it at any time and get out of a certain point very quickly. “Don’t open it” someone will deservedly say, but I’ll insist that games like Monkey Island, which in any case will be played by people who have lived in their own skin what means “stuck in a puzzle”, do not need such modern conveniences.

I am very satisfied with the dialogues, which hide the gems, and a second reading can make a terrible ki for today’s social events. I suggest you ‘read’ behind the words and trust me you won’t miss it. After all, this humor is also the most powerful sword in Ron Gilbert’s arsenal, for more than three decades. I find it gratifying that voices like Dominic Armato as Guybrush, Alexandra Boyd as Elaine, and other familiar vocal chords have once again become a resounding presence, yet the distinctive voice of Earl Boen as LeChuck shines through his absence, as the beloved voice actor retired from profession. LeChuck’s new voice, through Jess Harnell’s mouth, I can’t tell I was blown away. 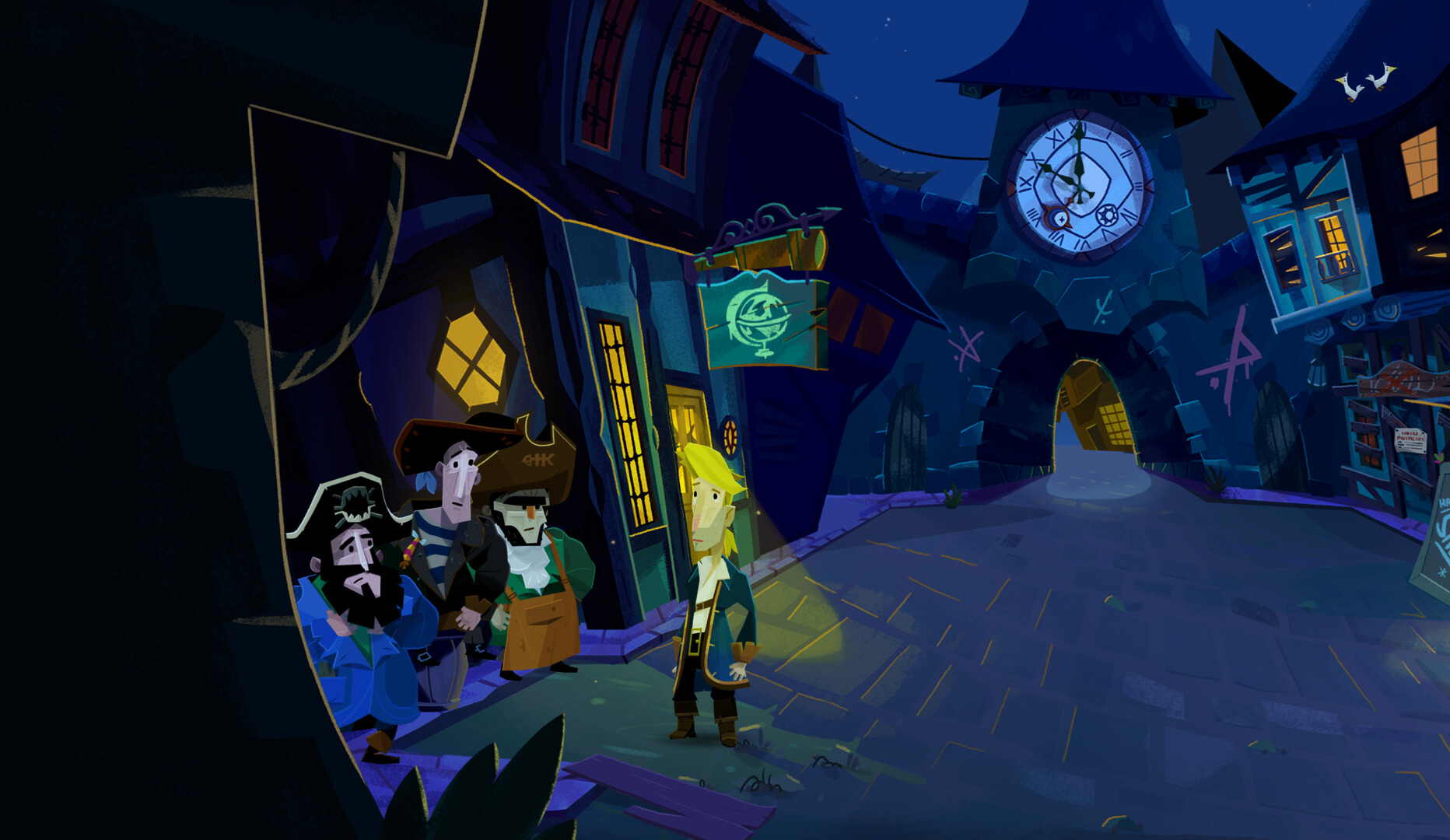 One of the reasons that the initial reveal of the title – along with the expected excitement – was also accompanied by so much grumbling, is the new image of Return to Monkey Island. First of all, it’s worth noting that the end result is Rex Crowle, a designer who has worked on Media Molecule’s LittleBigPlanet and Double Fine’s Knights and Bikes (by Gilbert’s friend and fellow traveler, Tim Schafer). So, at the grand finale of the series, players are exposed to a scene that looks like a picture book, but at the same time retains the essence of primitive pixel art, at least in its style.

If you ask me, I think Crowle and the entire design team did a great job and everything they “painted” seems to have been done with love and passion. The color palette is magical, the imagination is limitless, and the capture of the scale, mood and atmosphere of each area is very successful. The problem that I have a process. The design is so stylized, that I think cohesion is lost in the “eye” and vital information (even of an artistic nature) is covered in the chaotic background. 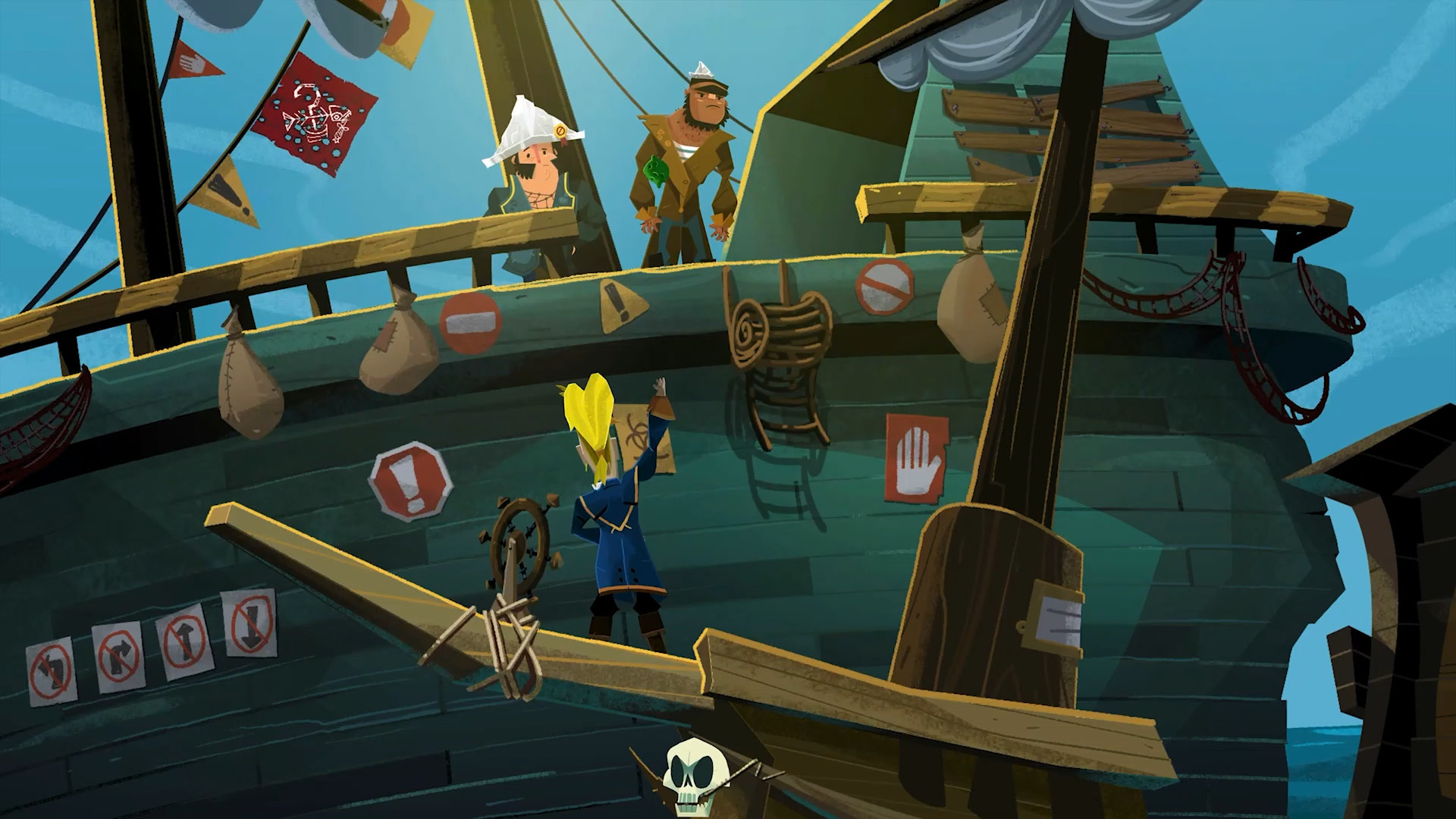 In simple words and you understand exactly what I mean, I think the aesthetics distort the image so much that a player will often be slow in understanding whether what is being seen there is a door, a table, a statue, or any other artistic touch. So in my case, yes, technically, I found the visuals to be excellent as creativity, but a bit “over the top” for game visualization that required player note.

Also, this visual cannot support the animation of the character, which is why I think it should be preferred in illustrations for books and not in ‘video’ games. Finally, I have to mention that the title plays beautifully, both with a mouse/keyboard, as well as with the console, with the Switch version (on which the review was based) is also problem-free and well-made.