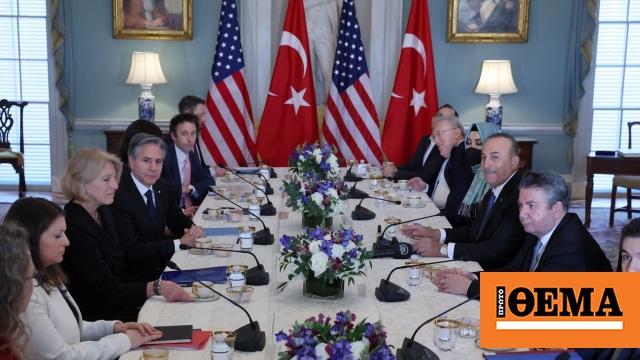 The meeting of the US Secretary of State is under way, Anthony Blinken, with its Turkish counterpart, Mevlüt Çavuşoğlu.

“We are allies and close partners,” Blinken said during joint statements with the Turkish foreign minister. “It does not mean that we do not have differences, but when we do have differences, precisely because we are allies and partners, we work through them in that spirit.” For his part, Cavusoglu described the F-16 deal as an “important issue” in defense cooperation between the United States and Turkey. Before the meeting, Mevlut Cavusoglu expressed optimism that Washington would agree to sell F-16 fighter jets to Ankara, citing the two countries’ “common strategic interests”.

But according to Reuters, top congressional officials oppose selling the fighter jets to Turkey, despite the support of the Biden administration.

It is noteworthy that the Turkish Foreign Minister is invited to carry out the operation Normalization of US-Turkish relationswhich has been in continuous crisis since 2017, and worsened after the Russian invasion of Ukraine.

In addition to the arms program deal, during today’s Blinkin-Cavusoglu meeting, which is being held within the framework of the strategic dialogue between the United States and Turkey, “all aspects of bilateral relations will be discussed and an exchange of views on regional issues will be held,” according to the Turkish Ministry of Foreign Affairs, which reinforces the information Which wants Mr. Cavusoglu to raise issues of interest to Greece, especially since the Turkish press seems particularly disturbed in the last days of the US military presence in Greece.

See also  Algeria: strike on April 26 and 27 in the civil service

Hurriyet newspaper seems certain that US support for Athens will be included on the agenda of the meeting, at a time when Ankara is intensifying its pressure on Washington regarding the right to veto Sweden and Finland’s accession to NATO, which appears in the strongest negotiating card of the Turkish president on the other side of the alliance. The Atlantic Ocean, according to the “Wall Street Journal”.

At the same time, it is believed that Ankara’s acquisition of new F-16 fighter jets, if successful, is an urgent desire of the Erdogan regime just months before the presidential elections in the neighboring country, in order to rally its constituency. , as well as the main narrative of the campaign about elevating Turkey’s regional role in the broader region.

Kalogritsas gave an SMS to Pappa to the contributors of the “SYRIZA channel” – Ivan, Maris and … A2

Moschato: “No luck in the sun, where did you find the money?” says a relative of the 47-year-old