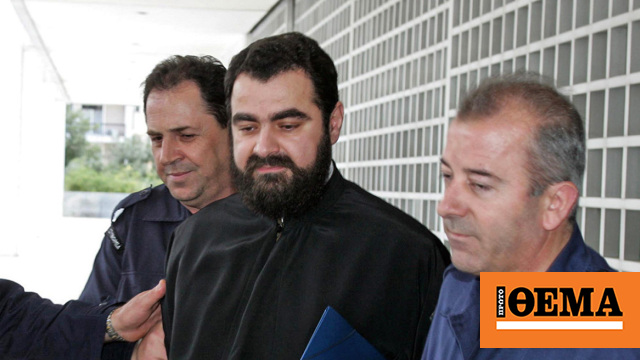 On Sunday mornings at the Church of Saints Peter & Paul the Apostles in Waribombi, the faithful attend divine service with due diligence, almost full church.

The serving priest is well known to some, and he recognizes the Archimandrite in his person Iakovos YosakisBefore 2005 his works and days were known throughout Greece.

Projects and days include his involvement in antiquities theft cases for which he was acquitted and of course the notorious illegal circuit in which he participated and was convicted.

Known to many for looking at God with one eye and power with the other, he was convicted by the Court of Appeal in February 2019 and sentenced to twelve years in prison (with suspension) for the offenses of passive and active bribery, mediation in bribery and direct cooperation in money laundering.


If this punishment alone seemed to be enough to prevent the brilliant Archimandrite from ministering, it did not happen after the church of Cometero and Agios Georgios, where he served since 2018, and then he was assigned to Varipombi.

Despite all the court cases and convictions, no action seems to have been initiated Church To remove it. According to ecclesiastical sources, the only person who had the jurisdiction to refer him to the ecclesiastical courts and suspend him was the metropolitan of Ilium, Acharnon, and Petropolis, from which Cometero Athenagoras belonged.

Iakovos Yosakis now works in the Holy Church of the Apostles Peter & Paul of Varypombi, and his presence there shows nothing more than that the “sins” of the infamous Archimandrite have been erased.

The two parish churches belonging to the borough of Ilio, Acharnon & Petropolios were taken under its roof, Iakovos Yosakis, in recent years.

The wise Archimandrite was able to return to the bosom of the church after his actions and the journey started with humility, but overflowed with excessive ego referring to places and people.

Dressed in golden robes, Iakovos Yosakis, not far from Piraeus and Agios Dimitrios, sings and gives communion to children and adults in the church of Varipobi he founded. That is, the area where this brilliant priest was born and raised, the son of a plumber and a housewife, lived on one of the two floors of a common apartment.

When Pavlos was born, his parents already had a daughter – with this name she was baptized – another girl followed, who simply increased her duties to her father.

Religious and conservative, his parents made sure to “push” their only son on God’s path from an early age, so when the now-teenage Pavlos attended the 5th Boys’ Gymnasium of Piraeus, he had other concerns.

He didn’t play ball with friends, didn’t stay out late, didn’t go to the cinema, he dreamed of becoming actors, singers, pilots or captains in a time of world changes. He chose to be a priest. It is not very difficult.

His performance in high school was excellent, and the good relationships he built with his teachers revealed his shyness.

The Path After High School Entered the theological school of Athens with only one dream: to soon become a metropolis.

Having a very good relationship with the then Metropolitan Iakovos of Kythira, whom he met during church celebrations in Praeus, he convinces him to ordain him as a deacon.

When he is seconded in Athens, and placed in the church of Agia Irini in Iolo, he takes his name – Iakovos.

In the mid-80s, Yosakis begins to make strong acquaintances within the hierarchy and easily learns what is happening in the metropolis, especially those who interest him.

In Kythera, when he is informed that the locals have come against Iakovos, he accepts the invitation of the elderly Metropolitan Panteleimonos.

He was 21 when he came to Myrina, and within a short time he had become a proto-Congress, a secretly sick borough, and brought out another Yosakis.

As written in the media at the time, it did not take long for rumors to spread in Lemnos about the young proto-Singelo and his going out in bars with those who wanted to manage the money of the metropolis in white.

Residents are excited when whispers of the old icons are gone and Panteleimon’s old Austin Morris is replaced by a Mercedes.

Amidst angry demonstrations and public outcry, Yosakis and the aging metropolis would leave Lemnos and return to Athens.

In 1988, he turns 23, he loses first his father, and then Panteleimon, whom he anointed as the sole heir to his estate, whom he watched over and cared for until the end.

He moved to Cyprus and then to England, where he served in the Archdiocese of Great Britain & Thyatira, while earning a doctorate in pastoral theology.

He would visit Kythira again in 1996, when he was placed in the monastery of Agios Theodoros, and initially the people embraced him, seeing in his face a priest interested in the churches and temples of the island.

Soon, we get the legends of Lemnos with rumors of sexual abuse, illegal excavations and antiquities as reported by the periodicals.

The situation reaches a stalemate, and the residents break down the door of the monastery and drag him out, while Yosakis talks about the people who are “in the dark”.

Amid general outcry, Metropolitan Iakovos resigns, the Church conducts thorough investigations, and a wise priest opens a plumbing business similar to what he did in Lemnos.

A flight to America and the Diocese of Panama, where he was assigned to the Archdiocese of America, was a way for a priest who loved power and wanted to rise as high as he could.

At his sister’s wedding, he meets the first judge, Antonia Ilias, with whom he develops a close relationship in the following years, both protagonists of the pre-judicial circuit.

Later, when both were confronted with their responsibilities, the former investigator confessed that he had met her in February 2001, at her sister’s wedding. “He is not my close friend, I met him about 10-12 times at his house in Geratsini, at church, at my own house, but at shops in Kolonaki with lawyers and businessmen.

He is a man who has traveled with many judges and good people”. Ilias has family problems due to her father’s ill health, and Yosakis helps her move to America.

He is hosted in Chicago by a family introduced by Archimandrite, so that his father can undergo an examination. In 2003, on March 4 and October 13, he tried two cases of Yosakis, while a third case “accidentally” fell into his hands, in which Archimandrite was interested. Compensation from the insurance company for Saint Igor’s traffic accident, he is awarded a maximum compensation of 480,000 euros.

In a pre-trial hearing, Yosakis and Antonia Ilias fled to face trial and the other defendants received nine years and eleven months in prison.

Archimandrite, who was remanded from prison and released from prison, had until then been widely known in judicial circles, and publicized in the media, showing a very intelligent man who was comfortable talking about everything.

He was also acquitted of an antiquities theft case, while he was vindicated when he appealed against Greece to the European Court of Appeal.
However, after the first trial, a second case followed, and Yosakis was once again one of the protagonists in a case incompatible with the life of a priest.

In February 2019, he was sentenced to 12 years in prison with suspension and continued his priestly duties in the Diocese of Ilio, Acharnon and Petropolis.

After all, in his case, as his old acquaintance used to say, races make the Pope!

Robert Pattinson in a skirt at the Dior show

US: Gay couple abuses step-sons, sells them to pedophile ring