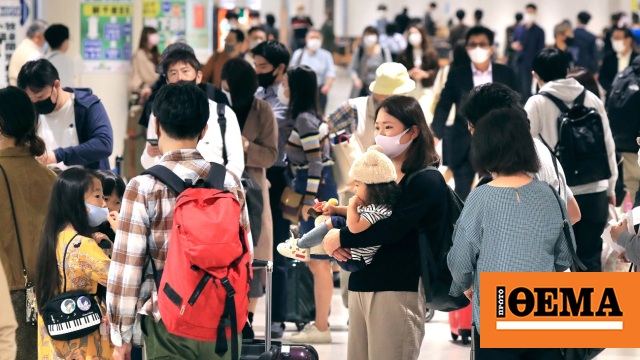 At a rapid pace, one after another, countries are “vaccinating” against China, after the outbreaks of coronavirus cases that appear there, but also fears of new mutations.

Late Friday night, the British government announced that from January 5, travelers from China will have to be tested for Covid-19 48 hours before departure, in response to Beijing’s lifting of health restrictions.

“At a time when Covid cases are increasing in China, before (the country’s) borders open next week, the right thing for us is to adopt a balanced and prudent approach by announcing temporary measures while the data is being studied,” the Minister of Health explained. Steve Barclay in his statement.

All passengers on direct flights from China will be required to show a negative test before departure. This measure only applies to England, as there are no direct flights to other UK destinations (Scotland, Wales and Northern Ireland). In addition, British health authorities will randomly test some passengers upon their arrival, mainly to detect possible new variants of the virus.

The British minister pointed out that “this decision was taken due to the lack of complete information from China.” The measures will be reviewed, depending on the data provided by Beijing.

Earlier today, following Spain and Israel, France announced that travelers arriving from China will have to undergo a Covid-19 test before their flight departs.

Because of the sharp rise in the number of cases in China, France is following the example of Spain, which has imposed restrictions. Travelers, in addition to having to show a negative coronavirus test before boarding, are required to wear a mask during the flight.

A government source said random testing is also planned when access to the genome is sequenced and any new variants of SARS-CoV-2 are detected.

Similar measures were taken by the French Spain. outside the European UnionThe United States and Japan have also taken similar decisions, while the Malaysian Ministry of Health announced today that all travelers arriving by air in the country will have their temperature checked to see if they have a fever, and even sewage from toilets will be tested on incoming planes at its airports. from China.

South Korea also announced that from January 5 it will be mandatory for travelers from China to take a PCR test no later than 48 hours before their departure or an antigen test within 24 hours. Also, from the 2nd of January, they will take a PCR test, that is, a molecular test, upon their arrival.

The Israeli Ministry of Health announced earlier today that Enforce a covid test For foreign travelers from China, which is experiencing an explosion in new coronavirus cases.

Health Minister Ari Deri, who took office Thursday evening, held a meeting today with senior public health officials to assess the impact on Israel of the massive increase in the number of virus cases in China.

The statement confirmed that during the meeting, “it was decided to instruct foreign airlines to accept foreign nationals on a flight from China to Israel only if they have a (negative) test for the Covid virus.”

The minister also called for the establishment of a “voluntary” diagnostic center for people returning from China and advised them to “avoid” travel to that country.

The lifting of health restrictions by the Chinese authorities led to a sharp explosion in coronavirus cases in China, after the country’s so-called “zero Covid policy” was suddenly abandoned. China has announced the end of mandatory quarantine upon arrival in its territory, starting from January 8, and the gradual resumption of foreign travel for Chinese, which has alarmed many countries, including the United States.

A pioneer in Covid vaccination, Israel mandated tests for foreign travelers and even special exemptions for flights from certain countries before lifting nearly all of those measures in early 2022.

Yesterday, the European Center for Disease Prevention and Control (ECDC) said the introduction of mandatory testing for Covid-19 in the EU for passengers arriving from the EU was “unjustified”.

Italy: We are ready to take new measures against Covid if the situation worsens

At the same time, Italy may, should the situation deteriorate, initiate new measures against coronavirus and other respiratory diseases.

The Italian Ministry of Health is studying new measures that can be applied in the event of an outbreak of the new Corona virus and an increase in cases of respiratory diseases. As reported by the Italian media, the Ministry of Health wrote, in its internal circular, that some of the measures that can be implemented – if necessary – are the mandatory use of masks in closed spaces, the increase in telework, and the reduction of events that lead to overcrowding.

See also  The Book of Revelation: Dialogues by the Fire for EL.AS Officers with the Night Godfathers

At the same time, it is indicated that a fourth dose of the coronavirus vaccine be administered to the entire population, and the fifth dose to high-risk categories of citizens.

The circular also states that at the regional level also, the competent structures should strengthen, if necessary, the provision of health care. It is reported that at this stage, in Italy, the use of a protective mask is only compulsory for employees and visitors of hospitals and nursing homes.

Belgium will assess the situation on Monday

The Belgian authorities are also on alert. On Monday afternoon, experts from the Risk Management Group will meet in Belgium to assess the situation with regard to the coronavirus, Belgian Federal Health Minister Frank Vandenbroek told Radio 1. The experts are expected to consider how Belgium can prepare for potential risks.

Dendia’s resounding message to Ankara: We will not tolerate any questioning of national sovereignty

USA: As president, Trump claimed losses to avoid paying taxes – he didn’t give a dime in 2020