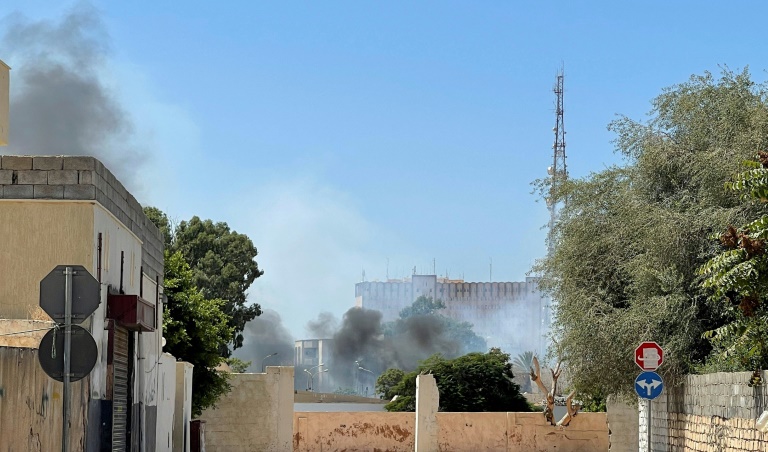 At least one civilian was killed and several others injured in violent clashes between armed groups in the Libyan capital, Tripoli, which continued from Friday night until Saturday, raising fears of a new war.

Fighting with heavy and light weapons erupted during the night in several neighborhoods of Tripoli (west), against the backdrop of political chaos with two rival governments.

Bursts and explosions rang out all night and the fighting continued at noon Saturday, according to an AFP journalist.

He said in a statement that the Tripoli-based government had blamed the clashes on the rival government camp, even as “negotiations are conducted to avoid bloodshed in the capital”.

A spokesman for the ambulance and rescue service in Tripoli, Osama Ali, said that “civilian injuries”, without giving numbers.

Local newspapers claimed that civilians were also killed, but no official toll has yet been published.

However, the Libyan news agency Lana announced the death of actor Mustafa Baraka, who was in one of the neighborhoods at the center of the fighting. His death aroused great emotion on social networks where he regularly posted videos.

The clashes caused heavy damage in the heart of the capital, according to photos posted on the Internet, showing charred cars and buildings filled with bullets. And set fire to a mosque and a private clinic, according to these photos.

The Tripoli-based government led by Abdel Hamid Dabaiba accused its rival Prime Minister Fathi Bashagha, who is in the center of Sirte, of “carrying out his threats” to seize the city.

See also  Russian-Western tension: Mariupol on the verge of falling ...

Since his appointment in February by the House of Representatives sitting in the east, Mr. Bashagha has been trying, unsuccessfully, to enter Tripoli to establish his authority there, and recently threatened to use force to achieve this. He did not immediately respond to Tripoli’s accusations.

Mr. Bashagha is backed by Field Marshal Khalifa Haftar, a strongman in eastern Libya whose forces attempted to occupy the capital in 2019.

Mr. Dabaiba, at the head of a transitional government, asserts that he will hand over power only to an elected government.

Tensions between armed groups loyal to one of the rival leaders have worsened in recent months in Tripoli. On July 22, the fighting left 16 people dead, including civilians, and about 50 wounded.

“The United States is deeply concerned about the violent clashes in Tripoli,” the US embassy in Libya said.

The UN mission in Libya also said it was “deeply concerned” by “clashes (…) in civilian-populated neighborhoods,” calling for an “immediate cessation of hostilities.”

Born in early 2020 from a UN-sponsored process, the Tripoli-based government had its main task to organize elections last December but was postponed indefinitely due to intense disagreements over the legal basis for the elections.

Libya descended into chaos after the uprising that led to the fall of Muammar Gaddafi’s regime in 2011. In eleven years, the North African country has seen dozens of governments passed, two civil wars, and has never succeeded in organizing a presidential election.