Switching from quantitative easing to QT in 2023 will raise bond yields because governments will issue debt that central banks can no longer buy.

See also  DEDDIE: Compensation for vacations in excess of 72 hours

At the same time, most of the movement in stock and bond markets over the past few months has been attributed to hopes Central bank policy shifts from sharp increases in interest rates.
The markets plunged into a short rally and so onAlthough recent data has shown that inflation has peaked in many economies.
“HeyI still believe that bond yields will continue their upward trajectory for the wrong reasons… I still think September is a warning of what is to come if governments continue to spendToogood said.
Over the course of September, the yield on 10-year US bonds briefly rose to 4% as investors tried to anticipate the Fed’s next move.
At the same time, the British 10-year bond yields rose so high that the Bank of England had to intervene to protect the country’s financial stability and prevent the collapse of British pension funds.

Toogood estimates that MTransition from quantitative easing to quantitative tightening in 2023 Bond yields will be pushed up because Governments will issue debt that central banks can no longer buy.
The European Central Bank is committed to starting It is “offloading” part of its huge €5 trillion portfolio from March next year.
Bank of EnglandIt is accelerating the pace of its asset sales and has pledged to sell £9.75 billion worth of government bonds in the first quarter of 2023.
But, Governments will continue to issue government bonds in a market in which central banks will no longer buy; Toogood points out.

How will the market evaluate a new €400 billion debt issuance?

At the same time, in this very negative economic environment, European governments i(a) Additional debt issuance in 2023 to address the energy crisis and energy costs.
However, given that the ECB will reduce reinvestment operations, the pressure on the market will increase and will increaseGovernments will have to entice private investors to buy an additional 400 billion euros in debt.
Since 2015, when the QE program began, the European Central Bank has been the guaranteed buyer of government bonds and the lender of last resort.
After all, it has absorbed in its portfolio aAverage volume of new bonds issued by eurozone governments between 2019 and 2021.
However, since the new year, it will start counting its portfolio in the first phase ADLimit the reinvestment of those bond earnings due.
Far from coincidental, the ECB’s policy change coincides with this Efforts of eurozone governments to mitigate the effects of rising energy costs.
This means that they need additional money, so they will issue new additional government debt.
the Germany in particular will issue record debt over the next year.
according to her calculations Bank of America, the amount of new government debt that investors will be required to absorb in 2023 will be double the previous record a decade ago.
This means that the fileIssuing authorities will need to work twice as hard to attract investors.
At the same time they risk paying much higher returns, ieThe ECB’s aggressive tightening policy and new interest rate hikes announced by Christine Lagarde last week have convinced investors that another half-percentage-point increase in borrowing costs will follow in the new year.. 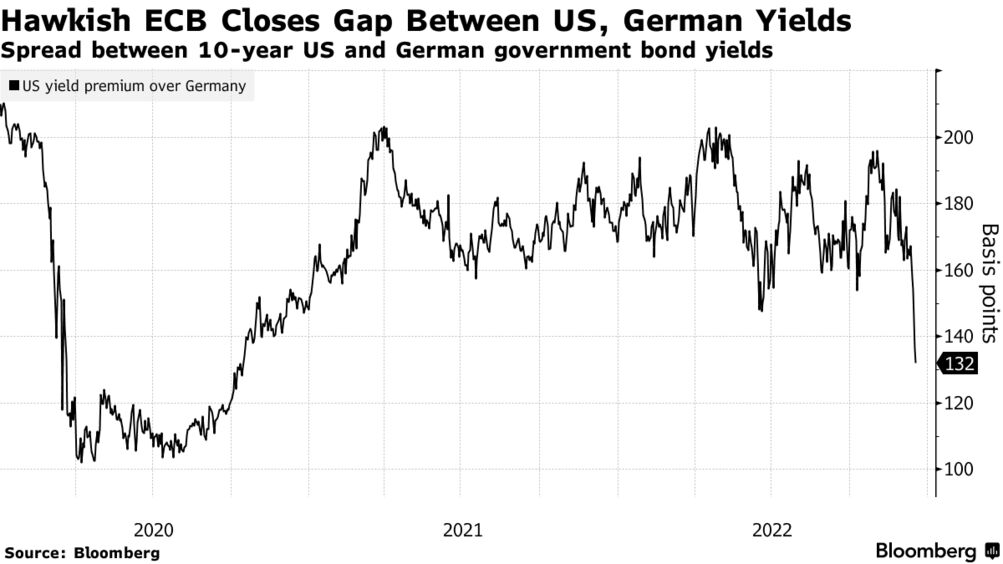 The increase in yields is for sure

German 10-year bond yields have already increased by 250 basis points during the year and Italian yields by more than 300 basis points, of which 50 basis points. It was only during the last week.
BNP Analysts Paribas, Deutsche Bank and Citigroupwho undertake the sale of public debt to eurozone countries, for example an appreciationGovernment bond yields will continue their upward trend next year as well.
BNP Paribas estimates that the sales of these bonds It will push the 10-year German bund yield to 45 basis points. With that, it came in at 2.75% in the first quarter of the year.
For now, the bank will continue to reinvest some of the debt it bought during the pandemic. However, at the same time, it will start shrinking the $5 trillion in bonds. euros that have accumulated in its portfolio during the years of quantitative easing, Selling €15 billion worth of bonds per month from March to June.
What will happen next is still not clear.
In late November, the ECB’s working group, which has contacts with the market, said the biggest concern was the large amount of debt investors would need to buy privately.
As noted by Julien Le Peron, Managing Director of Investments F.CAllianz Global Investors, “It is a fact that investors are not willing to buy Eurobonds next year.”

First… Italy is a thorn

After all, Italy’s debt sustainability is a cause for concern.
Italian 10-year bond yields exceeded 4% and are beginning to spook investors.
However, not all banks expect a further increase in yields in the new year.
the JPMorganfor example, it is estimated that it will be Retreatwhile even BNR We expect them to decline after the initial rally. After all, there is also mailWe hope that the high returns will attract investors And in the event of a recession, it would make bonds more attractive because they are low-risk investments.