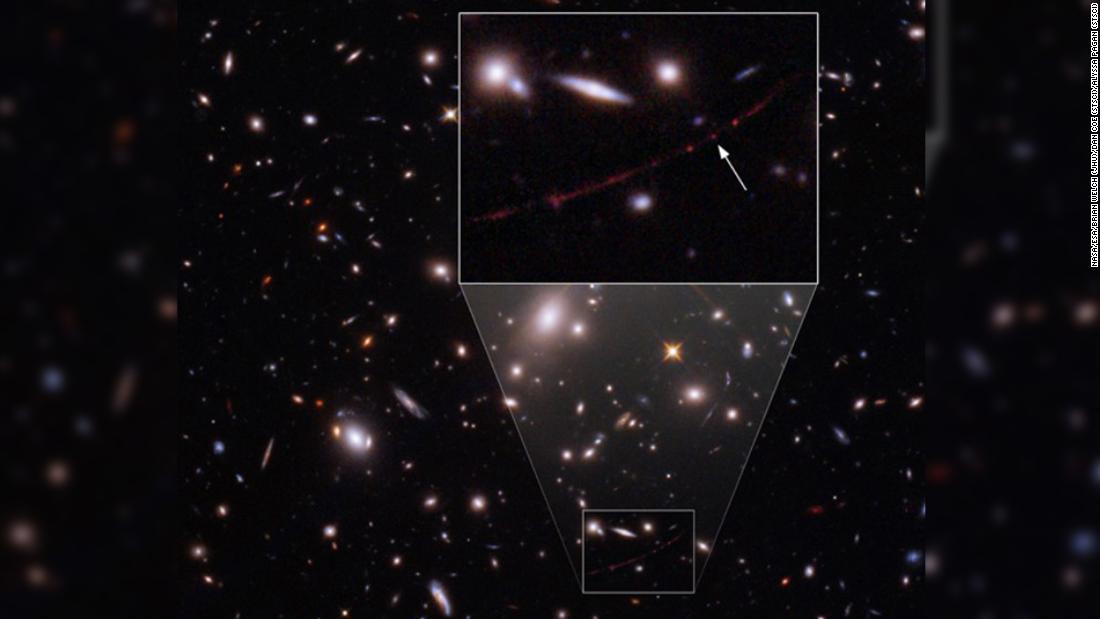 It’s the most distant star revealed yet, 900 million years after the Big Bang. Astronomers named the star Earndel, which derives from Old English words meaning “morning star” or “rising light.”

A detailed study of the findings, published Wednesday in the journal nature.

This observation broke the record set by Hubble in 2018, when it observed the existence of a star when the universe was about four billion years old. Earndel is so far away that it took 12.9 billion years for starlight to reach us.

Earndel’s observation could help astronomers investigate the early years of the universe.

Study co-author Victoria Strait, a postdoctoral researcher at the Cosmic Dawn Center in Copenhagen, said in a statement.

“When the light we see was emitted from the Earendel, the universe was less than a billion years old; only 6% of its current age. At that time it was 4 billion light-years away from the primordial Milky Way, but within nearly 13 billion years It took light to reach us, the universe expanded so that it is now an astonishing 28 billion light-years away.”

All the stars we see in the night sky are in our Milky Way. Incredibly powerful telescopes can only see individual stars within the closest galaxies. But distant galaxies appear to be a misty of light jumbled from the billions of stars they contain.

But a gravitational lens, predicted by Albert Einstein, allows for a deeper look into the distant universe. Gravitational lensing occurs when closer objects act like a magnifying lens for distant objects. Gravity mainly distorts and amplifies the light of distant background galaxies.

When light passes near massive objects, it follows a curve around that object. If this object is between Earth (or in this case, Hubble) and a distant light source, it can actually divert and send light toward us, acting as a lens to magnify its intensity.

Many distant galaxies have been found in this way.

In this case, the alignment of a huge group of galaxies acted as a magnifying glass and intensified Earndel’s light thousands of times. This gravitational lensing, along with nine hours of observational time on Hubble and an international team of astronomers, created the record-breaking image.

“Usually at these distances, entire galaxies look like little smudges, with the light of millions of stars fusing together,” lead author Brian Welch, an astronomer at Johns Hopkins University in Baltimore, said in a statement. “The galaxy that hosts this star has been magnified and distorted by gravitational lenses in a long crescent we’ve dubbed the sunrise arc.”

To make sure that this is really a single star, rather than having two very close to each other, the research team will use the recently launched James Webb Space Telescope to observe Earndale. Webb can also reveal a star’s temperature and mass.

Study co-author Sune Toft, lead author of the Cosmic Dawn Center and professor at Niels Bohr Institute in Copenhagen, said in a statement. “Webb will even allow us to measure its chemical composition. Earendel is probably the first known example of the first generation of stars in the universe.”

Astronomers want to learn more about star formation because it formed early after the universe began, long before the universe was filled with heavy elements from the death of massive stars.

Webb can reveal if Earendel is made largely of primordial hydrogen and helium, making it a Population III star — stars assumed to have existed shortly after the Big Bang.

“Erndel has been around for so long that it probably didn’t have the same raw materials as the stars around us today,” Welch said. “Earendel’s study will be a window into an era of the universe that we weren’t even aware of, but that led to everything we know. It’s as if we were reading a really interesting book, but we’re starting with chapter two, and now we’ll have a chance to see how it all began.”

The Webb telescope may help astronomers find stars farther than Hubble can detect.

“With Webb, we might see stars farther than Earendel, and that’s going to be incredibly exciting,” Welch said. “We’ll go back as far as we can. I’d like to see Webb break Earndel’s distance record.”