Double EarthquakeIn the south it recorded 3.9 and 3.8 on the Richter scale. EuboeaAs estimated by the Geodynamic Institute of the National Laboratory of Athens.

The epicenter of the tremors, which occurred just minutes apart, was located 8 kilometers east-southeast of Zaraki in Evia, in a wider area that has recorded an increase in seismic activity in recent days.

read more: Seismologists relive the 1981 earthquake – what happened then and why they fear it now

The focal depth is estimated at 10 kilometers.

Beyond Evia, the earthquake was also felt in Attica. 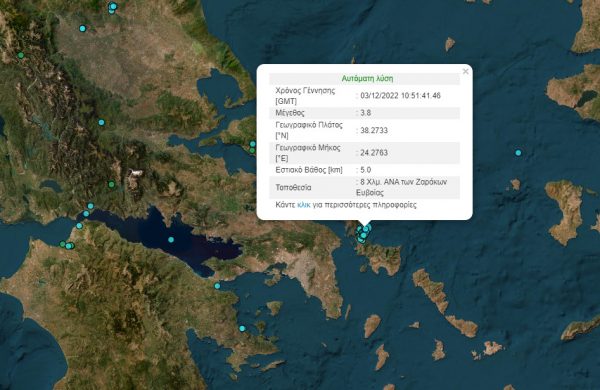 He worries about an unknown blind bug

Seismologists, residents and the government apparatus are on high alert after the series of earthquakes in the last few days.

As they point out, it’s a blind fault that hasn’t surfaced, which is why they’re asking for time to decide whether last Tuesday’s 5-magnitude earthquake was a major earthquake or an aftershock.

The head of OASP, Efthymios Lekkas, noted that experts are concerned and are strictly monitoring the area.

“We are always cautious because we don’t know what processes are going on inside the earth,” he added: “In case of a new, big earthquake, we have to see some measures that are implemented so that there are no consequences. For this, we have contacted the zonal district administration and municipalities. Also with the relevant ministry. “We are in touch. The area does not have the seismic potential to cause an earthquake of magnitude 6. It is not related to other earthquakes in Greece. We are in the same area, but it does not affect each other,” said Mr. Lekas ​​commented on the seismic sequence.

Regarding the monitoring of this event, Mr. Lekas ​​noted, “It’s an unknown blind fault that doesn’t come to the surface. There are faults in ocean space that justify seismic activity. An earthquake event is a complex event that we can’t see with instruments. It’s an event where we can’t detect or record pre-earthquake processes. Other We don’t have the same potential as natural phenomena”.