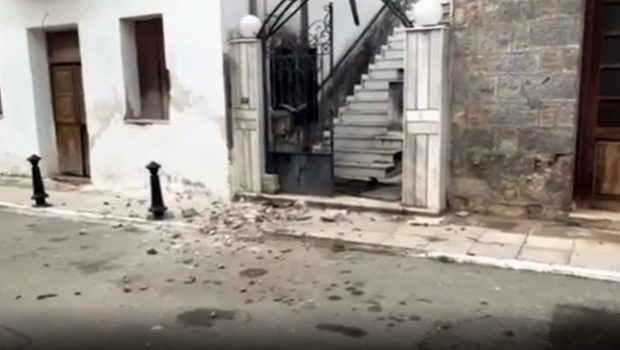 Competent officials are alarmed by the new powerful authorities Earthquake Inside Euboea Evidence indicates that we have entered a cycle of intense seismic activity over a wide area where at least two different faults have been activated.

A new 4.9-magnitude earthquake near Psachna has surprised seismologists, who have spent the past month focusing their attention on the largely unknown. A fault near the village of Zarakes and Nea Styra in the southeast of the island.

Residents of the area are expected to have a difficult night as the earth continues to shake from dozens of aftershocks. On the plus side, there was no damage to buildings, although many are expected to spend the night outside their homes as guests or in their cars.

Assessment of the situation

Due to the severity of the situation in the afternoon following the order of the Minister of Civil Defense Christos Stylianides, Special Scientific Committee on Seismic Hazard Assessment convened. According to the commission’s findings, the evolution of the seismic sequence is continuously monitored by national seismographs and accelerometer maps.

Indeed, as it declared, “from the analysis of the data so far, the event is ongoing”, at least until now, allowing no one to say with certainty that the magnitude 4.9 earthquake was a major one.

However, dozens of aftershocks are rated as the first positive development by seismologists.

Either way, residents of Psachna’s wider area should be especially careful in the next hours, maybe even days.

Strong recommendations are made by Civil Defense:

(a) avoid entering and staying in damaged or highly vulnerable buildings and
(b) Choose safe routes when moving through the urban fabric and protect them from falling objects or other structural elements.

Local authorities are on high alert

In the afternoon, a meeting was held with concerned organizations at Pisagna.

All agencies noted during the meeting that “they will maintain heightened readiness” and following orders issued by the fire brigade headquarters, all units of the fire brigade will continue patrolling the wider area of ​​Central Evia so far. No serious problems were detected.

So far, one shop window has collapsed and cracks have been found in old buildings.

Tomorrow, Thursday, engineers from the Ministry of Infrastructure are also expected to check the generally old buildings in the area, while engineers from self-government agencies check public buildings and schools.

Mr. As Keloididis said, speaking to APE-MPE after the meeting, “We were also informed about the seismicity of the area, which is capable of producing large earthquakes. But so far the earthquake sequence is as expected. The whole mechanism is natural. This means we are not complacent, but we are alert and full of civil protection. The mechanism is also being developed as planned.

Lekas: The possibility of a major earthquake is small but real

Speaking at MEGA’s main newscast, Efthymios Lekas, Professor of Geography and Natural Disaster Management, noted that the possibility of a major earthquake in the region, albeit small, is real.

“The probability of a major earthquake is very low. The error can be up to 6 magnitudes but the chances are small. It is impossible to predict earthquakes, we can only make assumptions.”

He said that the people of the area should respect the order of the local government and avoid damaged houses and buildings.

“They should not live in houses with minor damage. Be careful when walking in front of collapsing buildings and obey Swaraj’s orders and land”.

“With this tremor, the faults along Attica are not capable of exciting them. If the earthquake is 6.5 Richter and above, this possibility is there.”

The new quake is located on an older fault that produced a magnitude 5.3 earthquake in 2003 and is not known to be related to earthquakes in Nea Styra.

Geodynamic Institute Deputy Director Mr. Vassilis Karastathis said: “This happened in an area that has experienced earthquakes of this magnitude many times, so from this fact it is not surprising that an earthquake occurred in this area” and continues: “In the past there were other series in 2003, 2009, 2010. In other words, earthquakes with magnitudes of this order “There’s a history that well supports the vibration. This region that’s just triggered has nothing to do with the region near Nia Styra.”

See also  Cepolia: Attack by EL.AS. A shelter where a 12-year-old girl was allegedly released

For his part, Professor of Seismology at AUTH Mr. Manolis Skortilis stressed to ERT3: “Our attention is focused on precisely identifying the dimensions of a specific seismic fault, but to do this we have enough data to see a more clear picture of the specific seismic impulse in one or two 24 hours”.