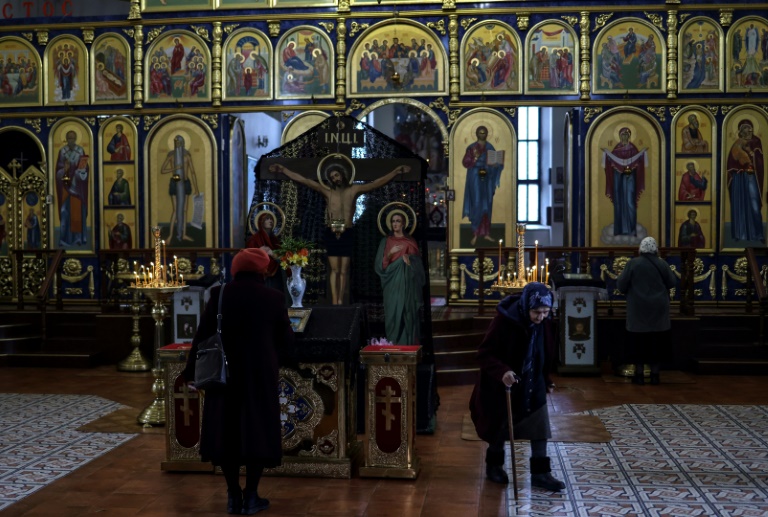 Usually, the bombing rushes into the distance on the front line. But on this Palm Sunday, the residents who remained in Kramatorsk take advantage of the calm in this city in eastern Ukraine under the threat of a Russian attack.

The ranks of the believers are scattered. There are about forty people, the majority of whom are women with colored scarves.

It is difficult, very difficult and frightening at the moment,” said a lady as she arrived in front of a red brick building with its four golden domes. We must pray for our soldiers to have strength and faith, this is necessary. “We need it and they need it,” she told AFP, declining to be named.

Two young children return with their mother to church. Branches at hand, they come to light a candle, and then go out.

“Today is a big party, Palm Sunday. It would be a mistake not to come, especially when it’s calm,” says Nadia, 30, whose 3 and 4 year olds go to play in the small garden next to the church.

Nadia does not want to be evacuated. I’m afraid to go anywhere on my own with two kids. They are still young. And all my relatives are here,” she explains.

“We don’t go downstairs every time the sirens go off. It’s too stressful for them. We have a place downstairs just in case, but we’d rather stay home if possible,” she says.

In the city center, a few old trolleybuses still operate. Near the station, which has been closed since an April 8 bombing that killed 57 people, residents on the sidewalk spoke in small groups.

Some carry shopping bags in their hands. A few food stores are still open.

Some shelves are empty, but many customers remain in the aisles.

Igor Kudryavtsev, the young director, is pleased to be at the service of those who remained to live in Kramatorsk. The vast majority of the population of 150,000 has left the regional capital of Donbass.

“Our profits are not high (as it was before the war), but we are responsible for those who stayed. Most of them are old people who for some reason could not leave,” the official said.

Only one of the chain’s eight stores located in the city has closed, due to a staff shortage. Bread, meat, vegetables, groceries, cheese, tea… “We have all the products we need. There is no problem with the supply,” he assures.

In nearly empty screen boxes, an employee is busy returning bags of candy. “This is what leaves the fastest, with tea,” she says.

In the large downtown market, the majority of the stalls have closed the curtain, but dozens of residents wander the aisles.

“It’s tough but we keep going. We have less than half of our regular customers,” says Yelena, behind her small clothes stall.

Why didn’t you leave town?

“I have my own home, I’ve worked hard and won’t move anywhere. My dad is 80, and I’m not leaving. Slowly but surely, I keep working,” she explains.

“I believe in our men (up front), and I believe in Ukraine,” says the 51-year-old saleswoman.

Moreover, cigarettes in the mouth, Sergui sells vegetables, vegetables and fruits. Work is difficult. But he doesn’t want to leave either.

“I have nowhere to go, even if I wanted to. I have no desire to leave. Of course it was better without (the war). When it was calm, we worked and lived a good life,” he laments.

What if the Russians reached Kramatorsk? “Honestly, I will work as long as I can,” he says.

Near the station, a military truck with a large trailer is slowly passing at a crossroads.

It carries an impressive 203 mm cannon. The range of its shells is about forty kilometers.

This is approximately the distance from Kramatorsk to the front lines around the city.