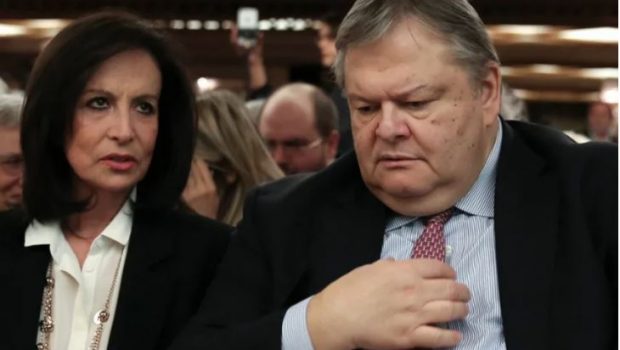 Are we still talking in 2015 terms for 2023? The title of the upcoming event and the question mark “We live in Europe” brought reactions from political figures from the area of ​​the progressive center, but it also brought a response from one of the speakers, Evangelos Venizelos. In the event. Let’s take things from the beginning.

On Thursday at 7pm, at the Goethe Institute, Panteion University and the Hellenic Union for Human Rights are having a public dialogue about wiretapping, one of the topics that occupies most of the news before the elections.

Four constitutionalists will participate in the panel: Nikos Alivizatos, Evangelos Venizelos, Ifigenia Kamtsidou and Xenophon Kontiadis. The coordination was carried out by Andreas Takis, President of EEDA, while the introductory presentation will be made by Professor Dimitris Christopoulos. The topic had its own interest: “Are we staying in Europe?” Wiretapping, Rights and the Rule of Law”.

Negative experience and reason for discount

The former president of PASOK responded to the first reactions to the question mark with the phrase “yes” in the 2015 referendum: “I was not asked about the title, but it did not bother me. The opposite. Apparently the title refers to the reaction movement to the announcement of the July 2015 referendum, whose solemn result was reversed in a few days. Obviously , the implicit question is whether the value and institutional issue of our July 2015 reaction is still valid today,” Venizelos wrote.

“My answer is that it is obvious. Our reaction, however, mine, was not temporary, fleeting or small party,” he said, adding that nothing that happened that day is presented in a different light today.

“So, ‘Are we staying in Europe?’ I accept the use of the question. In the title of this event, as a sign of wider retrospective and consequent acceptance of the importance of “staying in Europe”, as a state, as a society and as a legal order, being an integral part of the European legal and political culture and acquisition. “Not given to those who exercise power or anyone who thinks they are using ideological power,” he asserted. The current experience and above all the reason for becoming a dangerous oligarchy so that “others do not come” as a result of which “others” feel that the importance of the Constitution and the guarantees of law are being removed. .

In other words, Venizelos pointed out that what happened in the previous ten years, especially when SYRIZA found itself in the country’s government, was a negative experience, but not a reason for exclusion – it would give SYRIZA a chance to slip away once. Again in corporate accidents.

“Vangeli, I’m surprised, I don’t agree” – “But I don’t debate only with those who agree with me politically”

A “dialogue” in the comments between Venizelos and Anna Diamantopoulou revealed two different points of view: “Vangeli, I am surprised and I disagree with the choice of “support” as a topic that brings back a problem. No longer brought up by anyone. The motto remains the same no matter how much we try to analyze it later. You know better. Answer: We’re in Europe! Hyphenated and correct,” she wrote of the post.

The answer of the former leader of PASOK again took the form of a comment: “Brother, I do not understand what you mean. I sign my opinion that we are in Europe. Obviously there is no question. But for Greece, for every EU member state, EU values ​​and above all the law This does not mean continuous and strict control of compliance with the regime’s guarantees. This control is exercised by civil societies, by national independent authorities, by national courts, by the national legal community. This control is applied even more strongly by the ECHR and the CJEU. We are still Europe, but we do not violate fundamental rights and guarantees of law. will not be tolerated so that the “we remain Europe” protesters will not benefit politically in the 2015-2019 period,” he said. pointed out.

“Personally, I think I have the right to “check the credentials” for the attitude of others in the period 2015-2019. I certainly have no political obligation to provide credentials for the country’s European orientation and stability in relation to SYRIZA. Hands down to whoever has a rich “war record”. As a professor of constitutional law However, I don’t debate only with people who agree with me politically, and I don’t only participate in events where the organizers agree with me politically. I have a different understanding of the conditions for conducting scientific dialogue.”