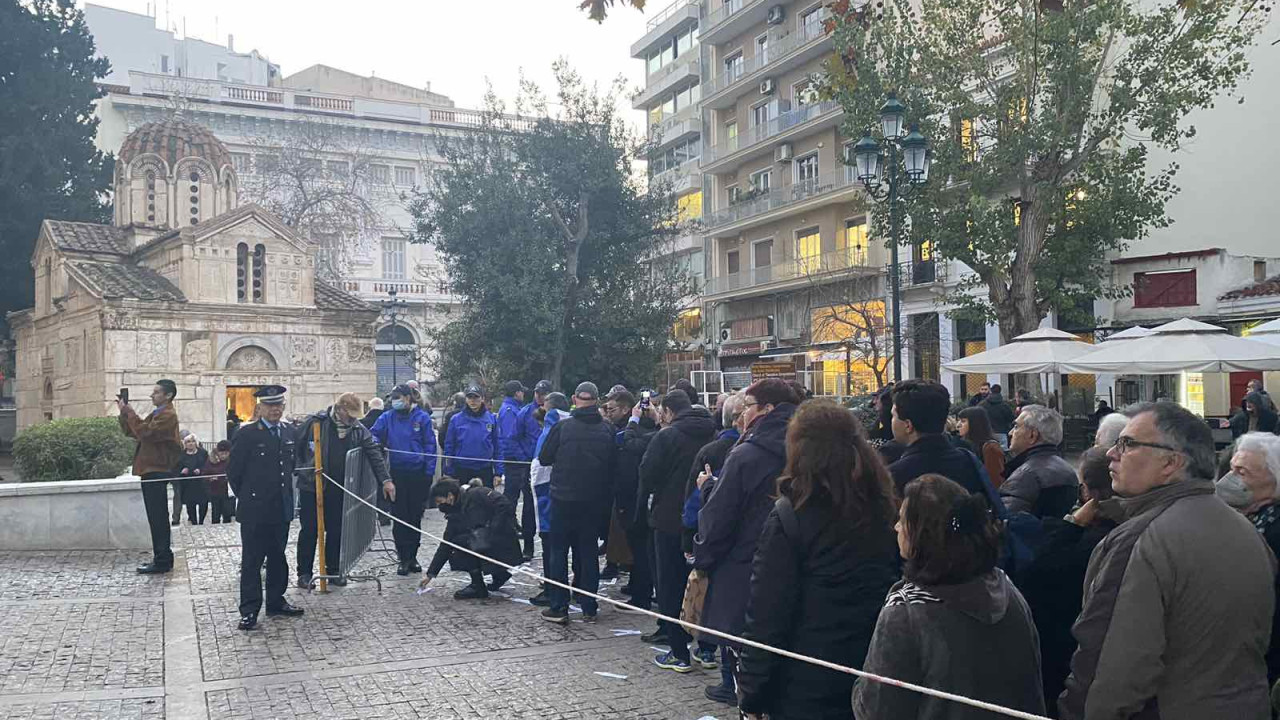 Crowds of people flocked from dawn to say a final “goodbye” – a line of people running all the way to the metropolis and almost reaching Monastiraki.

The body of the late Emperor Constantine arrived at the Metropolitan Church of Athens just before 6am.

The body left the first cemetery shortly after 05:00 and arrived at the church of Agios Eleftherios at 5:45, where access was free until 10.30 for anyone wishing to pay their respects.

People thronged from dawn to bid a final “farewell” to the former king.

The line stretches the length of Mitropolios Street and almost reaches Monastiraki Square.

Greek police estimate that the number of arrivals so far reaches 5,000.

Waiting for more than an hour to get the body.

The funeral event of former emperor Constantine in the metropolis of Athens was covered by several foreign press networks.

Some of those present also threw trikaki with the inscription “Immortal King Constantine”.

Cafes around the Metropolitan Cathedral were open from dawn and packed with people.

At 12 noon, the Exodius Mass will be celebrated in the Metropolitan City of Athens presided over by the Archbishop of Athens and All Greece Hieronymos, while the members of the Permanent Holy Synod will also participate.

At the request of the family, access to the metropolitan church will be restricted to their guests. In Funeral of former Emperor Constantine Deputy Prime Minister Panagiotis Bikramenou and Minister of Culture and Sports Lina Mendoni will be represented.

Seat arrangement will be based on protocol. Archbishop Hieronymos leading the exodus procession will be at the beautiful gate, and next to him will be the 12 synodal metropolitans, right and left, 6 and 6.

Next, immediately, before the choir of the temple and the despotic throne will be the family: the wife of the deceased Anna Maria, her children, her sisters, the honorary Queen Sofia and Irene of Spain.

To the left of the family are the current heads of state. Namely, the royal couples of Spain, the Netherlands, Sweden, Queen Margarita of Denmark, Prince Albert of Monaco and Grand Duke Henri of Luxembourg. Behind them will come former kings and heirs to the throne.

The list of dignitaries attending the exodus procession includes around 60 Greeks who are close friends, former classmates of the late King Constantine, businessmen and politicians. A representative of the Ecumenical Patriarchate, Metropolitan Theodoritos of Laodicea and representatives of the Autocephalous Orthodox Churches will also attend.

According to reports, former King Constantine’s eldest son Pavlos is expected to give a eulogy, while his coffin will be carried by Pavlos, Nicholas (his second son) and Pavlos’ two eldest sons.

The farewell ceremony is expected to end at 13:00, and then the motorcade will begin to Tatoi, where the former King Constantine will be taken to his final abode next to the tombs of his ancestors. When riding a motorcycle, motorcyclists and police patrol cars will constantly control the crossing, while an EL.AS helicopter. Following the procession he will give a picture to the operations center of the Hellenic Police.