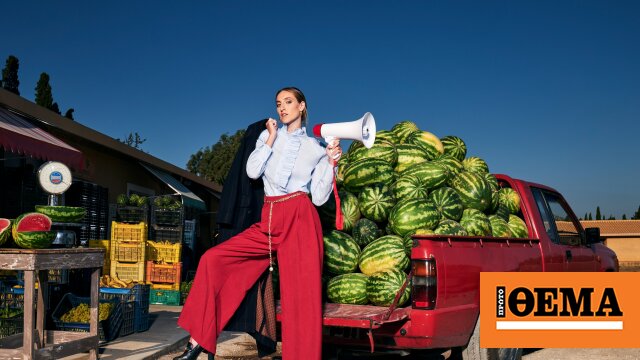 Another episode of it was sabotage GNTM 5. The Reality Star Fashion Show Monday night started with voluntary departure from Alexia Kouvela and ended with another exit, with Nicole Tsoulos declaring to the jury that she should leave for Canada.

The 23-year-old became the fourth contestant to voluntarily leave GNTM 5, as Alexia Kouvela, one of the plus-size models in this year’s contest, rounded up all the girls and announced that she was leaving the game, as her outdoor life business (she founded her agency) (special for plus size models in Greece) does not allow her to pursue her dream of getting to the top in the GNTM.

“Since 2019, I’ve been trying to get into the game and I really wanted to. I saw in my dream that they were calling me. I’m no longer just a model, but a businesswoman and external obligations I can’t control and I have people who can’t handle it. I’m leaving, I’m leaving. It saddens me but it On the other hand it also makes me happy. I now have two love, company and modeling and I have to mix the two.”

Apparently some of the girls were unimpressed by her passing and they didn’t fail to get their nails down.

Regarding the filming test, the girls were taken to an outside area, where they were greeted by Giorgos Karavas with Christos Berba, while Marie Vetnaros was in a car carrying watermelons. GNTM’s Model Trainer of the Year started out as the CEO of a watermelon-selling company and was photographed for the needs of the company’s campaign.

The contestants dressed elegantly and began standing on the watermelon wagon, using the megaphone as a support.

Myria was the contestant who went to work on the previous GNTM 5 challenge, and as the winner, she had the advantage of having Marie Vitinaros help her and tell her a few things about the best poses. At the same time, he had to give the blemish to three girls who had to be photographed holding a watermelon in their hands throughout the photo session. Miria chose to make it difficult for Julia, Despina and Jefa because, she said, she considered them to be weak players.

This time in the position of guest judge was an acquaintance from the old days. Christoforos Kotentos is back at GNTM for a unique look and has announced that he will be taking four girls with him to New York.

Mara, Nicole, Coty and Zoe are the four contestants chosen by the successful designer and the girls were thrilled! Very proud of her daughter, Michaela, Mara’s mother, said: “The fact that Mr. Kotendos said he was going to take Mara to New York gave her such a big boost, she was so happy!”


However, when it came time for the two contestants who had the best audition performance to advance…the “bomb” exploded.

Nicole while getting one of the cutest pictures told the judges that someone from her family is having a health problem and she has to go to Canada!

“I have a family problem and I will have to leave for Canada. The situation is not critical, but I will not be okay with myself. I am sure of my decision. At this point I have no other choice. A thousand apologies. Just because I am leaving here does not mean that I give up. I was old 9 years and I’ve been watching GNTM and I’ve been seeing these guys and now I’m putting them in front of me and I’ve made that decision,” said Nicole.

The judges were astonished when they told her that she had so much potential. yes Vicky Kaya She didn’t hide her annoyance because she was one of her favorite contestants and she believed in her so much!

“You’re one of my favorite girls and it hurts. I don’t know if it’s so serious that you have to give up on your dream. Only two months left. My mood is all ruined. I don’t want you to leave. She said disappointed and stopped the operation.” The operation stops here. He said.


Nicole’s departure caused the competition to go up and down and the judges decided to bring back the girls who were unable to enter the competition.

Outraged by the case of back-to-back voluntary departures that occurred, the judges decided that drastic decisions must be made. Vicky Kaya, Tasos Sofroniou and Giorgos Karavas made the decision to re-visit the girls who made a good impression on them from auditions and bootcamp and give them the opportunity to enter the game.

“They fly like flies. There are people who come to pursue their dream and leave after 15 days. We have to change the whole system. We have girls we wanted to spend. Let’s see each other again after the tests and bootcamp,” Tasos Sofronio with Vicki Kaya said: “The GNTM will be filled with new faces. !”

“Guys, what matters to us is to keep the level high! We are going to bring back the girls we saw in auditions and wanted to pass but for some reason they didn’t!” Vicki Kaya told the judges, obviously indignant.

BBC Documentary: Is China’s Terracotta Army ‘Made in Greece’?

Department of Health: They are ‘opening’ the afternoon surgeries at the NHS – how much will it cost?

Rishi Sunak: ‘Unity or Die’ – An exciting message to the Conservatives, rules out elections