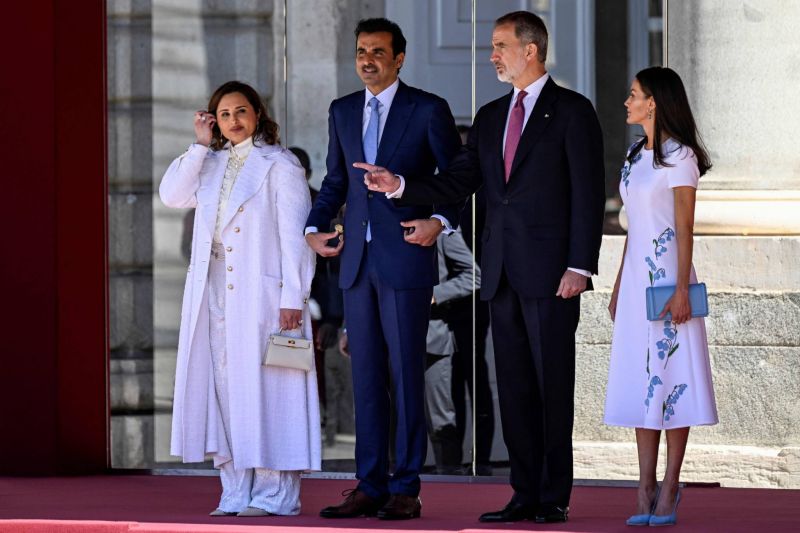 The Emir of Qatar, Tamim bin Hamad Al Thani, began, on Tuesday, a two-day state visit to Spain, aimed at strengthening economic relations with Madrid, especially in energy issues, against the backdrop of the war in Ukraine.

King Felipe VI received the Qatari leader, on his first state visit to Spain since assuming the throne in 2013, with military honor at the royal palace. The two kings should meet before lunch and then dinner. Prime Minister Pedro Sanchez is due to receive the prince on Wednesday at Moncloa Palace, the seat of the Spanish government.

According to a Spanish government source, dozens of economic and commercial contracts are scheduled to be signed during this visit, which will be attended by a large Qatari delegation consisting in particular of the Ministers of Foreign Affairs and Energy Affairs. According to this source, these agreements will deal specifically with energy, in particular gas, while Madrid, like the entire European Union, since the war in Ukraine has been seeking to diversify its supply of liquefied natural gas (LNG) to reduce its production of liquefied natural gas. Rely on Russia.

Qatar, which has the third largest gas reserves in the world, is currently Spain’s fifth largest supplier of natural gas after the United States, Algeria, Nigeria and Egypt. Gas from the emirate accounted for 4.4% of total Spanish imports in April, according to the Spanish gas network operator. According to Madrid, this share could increase, given Qatar’s production capabilities.

“We are working closely with our European counterparts” on “long-term LNG supplies” to the EU and “the development of the associated import infrastructure,” Qatar’s ambassador to Spain, Abdullah Al-Hamar, said in an interview with the Spanish daily. minutos.” According to a diplomatic source, the European tour of the Emir of Qatar, which began in Spain, will continue with trips to Germany, the United Kingdom, Slovenia and the World Economic Forum, which will be held in Davos, Switzerland, from May 22-26.

See also  Ukraine - Dozens of people were killed on both sides in the attacks on the Ukrainian cities of Sumy and Kharkov.

The Emir of Qatar, Tamim bin Hamad Al Thani, began, on Tuesday, a two-day state visit to Spain, aimed at strengthening economic relations with Madrid, especially in the field of energy, against the background of the war in Ukraine.
The Qatari leader, who was on his first state visit to Spain since assuming the throne in 2013, honored …