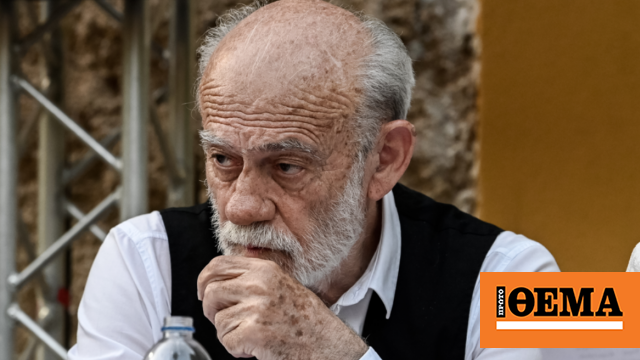 Talk about Maria, the woman he’s been with for the past few years and is unknown in the public eye George Lyannis In an interview he gave and broadcast on the morning of Tuesday 25 October.

The well-known journalist and writer on “Super Katrina” revealed that he was once in a relationship with a well-known singer, while also referring to his surprising role in the series “This Night Lasts.”

“I happily accepted the offer,” he said, adding, “I’m literally in the ’80s. ‘Dream’ isn’t just a doggie shelter, it’s a space between classes, where everyone goes. I absolutely love a woman who has been in my life for nearly 30 years. Her name is Maria and she is amazing “. “I would be happy to marry again” He added another point in the interview.

“I was the third person in a relationship”

Then George Lyannis pointed out: “Any woman who asked me to marry, I did. If my partner asked me to have a child now, I would. I was the third person in the relationship. I wasn’t a good father, because my ambition in journalism transcended everything.”

And about his love for folk singers, he said:I have communicated with many popular singers. I had a relationship with Rina Komiotis, and I also learned something new. She also married a famous singer, Lisetta Nicolau.

Furthermore, Giorgos Lyannis mentioned it When I met Paula in Theodorakis, she told me ‘I hear it, it’s a beautiful folk voice, but don’t say everything.’ And Paula wrote him a note saying, ‘Mr. Mickey, dear Mickey, if my generation doesn’t sing these songs, how will the next generation sing?’ “Tell her everything,” replied Theodorakis.

What we know about the BQ.1 and BQ.1.1 subvariants that were first found in Greece

Member of Parliament Andreas Patsis has been removed from the ND

“I wasn’t running, I wasn’t drinking, I didn’t realize I was seducing someone,” says Roma who killed the 15-year-old