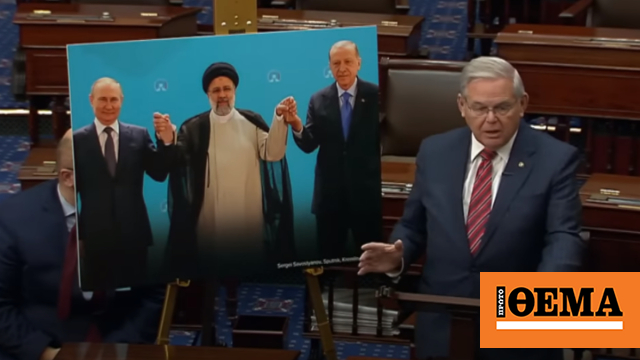 The US Senator launched a fierce attack Robert Menendez against Recep Tayyip Erdogan On the occasion of the Turkish president’s threats to her Greece.

Chairman of the Senate Foreign Relations Committee United States of America Make her head a wing and a feather turkey And he demanded that he stop all his aggressive and illegal actions in the wider neighborhood: “I demand that Erdogan stop all overflights over Greece,” the senator stressed.

As the Chairman of the International Relations Committee – emphasized Mr. Menendez, I will not agree to any sale of F-16s to Turkey until it stops its campaign of aggression across the region, adding, ironically, that it is a NATO member who is directly threatening to be targeted. Athens!

“We have seen Erdogan repeatedly question the national sovereignty of Greece,” he said.

He added that in the summer he sent fighter planes over the Greek islands. He said threats to strike Athens fit the pattern of Turkey’s illegal claims to Greek territory, emphasizing his decision not to allow the sale of the F-16s. According to journalist Lina Argyri, Senator Menendez was a “catapult” in the Senate: “He launched a sharp attack on Erdogan / He demanded a halt to overflights in the Aegean Sea and the removal of all occupying forces from Cyprus / He said no to the sale of the F-16 / He demanded a ban on intervention in Syria / Elections fair ».

catabilties or @employee In the Senate / He launched a sharp attack on Erdogan / He demanded the cessation of overflights in the Aegean Sea and the removal of all occupation forces from Cyprus / He refused to sell the F16 / He demanded to prevent interference in Syria / Fair elections pic.twitter.com/QKwRJ5nrLQ

And the US senator referred in a tweet earlier to Erdogan’s threat of a missile attack on Athens and the Turkish president’s relations with Putin, referring to the violations of international law, which he described as nothing but disturbing and completely unacceptable.

Go to @employee To address the threat of Erdogan’s missile attack on Athens.
Erdoğan’s growing ties to Putin, pursuit of oppressive and anti-democratic norms, and violations of international law are not only disturbing — they are completely unacceptable. https://t.co/bycY8nq4lx

The United States should take Erdogan’s actions seriously. Those who think that he only sells drugs, let them see that they said the same thing about Putin and now we have a war in Europe, ”the US senator noted.

President Erdogan threatened Greece with a missile attack. And he told the Greeks – in the literal sense of the word – “this will happen if you do not keep silent.” A NATO member directly threatens to target Athens, a city of 3 million people.

According to the United Nations, deliberate attack on civilians constitutes a war crime.

So I have come here, Mr. President, to condemn the recent actions of the Turkish President, which are not only disturbing, but also completely unacceptable.

For years, Erdogan has implemented repressive and anti-democratic policies at home and abroad.

Erdogan has imprisoned and silenced pro-democracy and human rights activists. More lawyers and journalists have been imprisoned in Turkey than anywhere else in the world

His government continues to hide the truth about the Armenian Genocide, and to persecute historians and authors. In 2008 a journalist who had reported on the genocide was murdered in the streets of Istanbul.

Regarding Erdogan’s involvement in the conflict between Azerbaijan and Armenia, he said: It is not surprising that Erdogan met this summer with the presidents of Iran and Russia, who are among the most violent dictators in the world. Just look at the leaders he works with. That’s because he has the same views on the world as them.

Do not hesitate to hold Turkey accountable for its violation of international law
“A few days ago, in front of the Town Hall in northern Turkey, President Erdogan threatened a missile attack on Athens. “Greece fears our missiles,” he said. They say a Typhoon missile will hit Athens. Then he addressed the Greek people directly and said: This will happen…unless you calm down We are talking about a NATO member directly threatening to target Athens, a city of three million civilians. According to the United Nations, deliberate attack on civilians is a war crime. And so, Mr. President, I have come to the Senate floor today to condemn the President’s recent actions Turkish language, which is not only disturbing, but also completely unacceptable.”

Speaking of an “offensive campaign” unfolding across the region, the senator again indicated that he would not agree to Ankara’s request to upgrade and acquire new F-16 fighter jets. I demand that Erdogan stop all flights over Greece and withdraw the last Turkish soldier from Cyprus. And I believe that, given his recent behavior, the United States should not put the F-16 fighter jets in the hands of President Erdogan,” was the message he sent to the Turkish leadership.

Regarding the ongoing threats of the shadows of the night in Greece, Mr. Menendez estimated that the escalation of inflammatory rhetoric is linked to the upcoming elections in Turkey. “We have seen Erdogan repeatedly threaten Greek sovereignty. He said, I read his words, that Turkish forces ‘may suddenly come one night’. The senator assessed that he appeared to be increasing his illegal and authoritarian behavior ahead of next year’s elections.”

However, Senator Menendez argued that these are not isolated rhetorical threats but rather a pattern of illegal claims that systematically challenge sovereignty over Greek territory. As he made clear, this questioning of Greek sovereignty is not limited to recent threats made against the capital of a NATO ally.

Regarding Cyprus, Robert Menendez said that President Erdogan is trying to divide the island even further after fifty years of illegal Turkish occupation. In this context, Mr. Menendez noted that Turkey is trying to move ahead with the illegal conquest of Farosia and further strengthen its military presence. Indeed, at this point he tried to link the occupation of Cyprus with the occupation of Ukraine, as he estimated that the President of Turkey is carefully watching Vladimir Putin’s illegal annexations.

During his speech, Senator Menendez tried to explain Turkey’s difference from Western values ​​by showing the joint image of Recep Tayyip Erdogan with the President of Russia and Iran. “It is not surprising that Erdogan met in Tehran this summer with the presidents of Russia and Iran – some of the most brutal dictators in the world. Just look at the leaders he works with. This is because he shares their point of view. And you can clearly see that in the way he views the region,” he noted.

However, the senator’s criticisms were not limited to foreign policy issues, but rather covered a number of Turkey’s internal issues related to the democratic slide combined with the violation of basic freedoms and human rights. He pointed out that “he has vengeful tendencies inside (the country) as well.” Just last week, one of Erdogan’s political rivals – the popular mayor of Istanbul – was sentenced to two and a half years in prison. the fine; Insulting members of the Supreme Council for Elections. And just in case the jail sentence didn’t send a clear enough message, the court also imposed a political ban on the mayor. Perhaps Erdogan will use this aggressive and repressive policy to deflect attention from the utter failure of his economy. He may do it out of malice, or he may do it because he himself is evil. But one thing is clear – the United States must take the Turkish president’s actions seriously.

From this standpoint, the Chairman of the International Relations Committee called for fair and free elections in Turkey, and called on the international community and US allies to:

• Take steps to ensure that Erdogan is held accountable for his behavior and violation of international law.

• Condemning the imprisonment of his political opponent.

• Use their influence to prevent further attacks in northeastern Syria.

• I will say to my colleagues here in the Senate, don’t be afraid to stand up for American values ​​in the face of Erdogan’s aggression.

• I will say to the citizens who live in the shadow of Erdogan’s Typhoon missiles, don’t forget that the United States stands with you.

• To those people in Turkey who still hope for a free and democratic future, I say do not despair. One day peace and courage will return to your homeland.