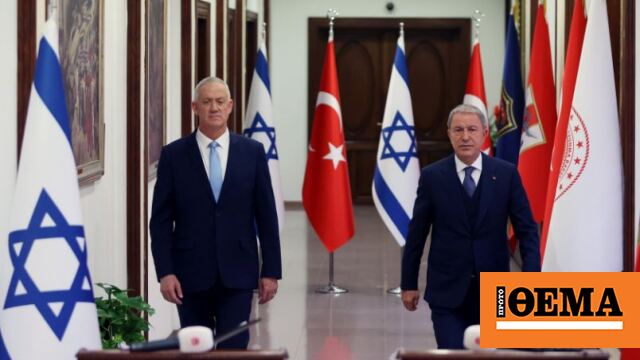 With special reference to Greece, Israel spoke of its importance restore relationships With Turkey, emphasizing values ​​such as preserving a open dialogue.

«We must adopt a balanced and positive approach to our relations by keeping dialogue openHe emphasized in particular the Israeli Defense Minister, Benny Gantz, referring to relations with Turkey, while not failing to focus on good relations with Greece and Cyprus.

The Middle East and Eastern Mediterranean region is changing. Alliances are being formed, some unthinkable not too long ago, in the face of troubling threats like those posed by Iran. There is no doubt that Turkey, a member of NATO and an ally of our mutual friend the United States, plays an important role in ensuring global stability. Our relations are complementary and positive as we maintain strong cooperation with our friends in Greece, Cyprus and the Gulf states. Indeed, we may build bridges and reduce conflict for the benefit of all parties involved. Looking ahead, we must adopt a consistent positive approach to our relations by maintaining an open dialogue.”noted the Israeli Ministry of Foreign Affairs.

And the defense ministers of the two countries, Benny Gantz and Hulusi Akar, respectively, decided to dissolve Israeli-Turkish relations during their meeting in Ankara, without concealing that this road is not paved with rose petals.

Minister of National Defense Halousi Agar: (The visit of the Israeli Defense Minister) “I would like to express that because of this visit our relations will develop further, our dialogue will increase, and some solutions will be found. This visit is very important.”https://t.co/CT8NYbNnuc pic.twitter.com/tnFsWdC6K2

After the meeting and during his joint statements with Akar to reporters, Gang noted that “it is no secret that our relations have had to overcome challenges,” adding that this historic visit, the first in a decade, “is a clear sign of positive progress in the future.” On his part, Akar said:Improving our relations and cooperation with Israel, particularly in areas such as defense, security and energy, will lead to important developments regarding regional peace and stability.».

The Turkish minister said that improving relations with Israel “will facilitate the resolution of some issues on which we have differences, especially those related to Palestine.”

Diplomatic relations were restored in 2016 and the countries exchanged ambassadors. But two years later, Turkey recalled its diplomats from Israel and expelled Israeli envoys after Israeli forces killed Palestinians who took part in “March of Return” protests in the Gaza Strip.

Earlier this year, Israeli President Isaac Herzog visited Ankara in the first visit by an Israeli leader to Turkey since 2008.

Kogias revealed that the 38-year-old threw acid at the 36-year-old while he was sleeping.

See also  Yemen: Designation of Houthi rebels as a "terrorist group" by the United Nations