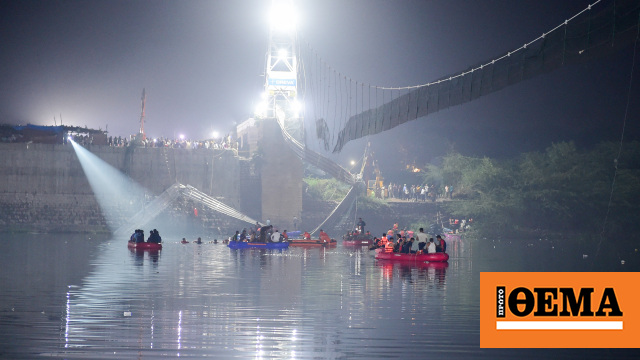 At the time of the collapse of the pedestrian bridge in India Of which 132 people have been killed so far, a security camera has recorded.

Video appears bridge He shakes it a little while some of those inside shake it with their hands, oblivious to the mortal danger they face.

A few seconds after it started videoThe bridge It collapses and almost everyone on it is in the water.

According to the latest report announced by the Indian authorities, dead They now number over 130.


Authorities estimate there are around 500 people, including many women and children over and around the bridge, Participation in special events for the religious holiday when the cables that were carrying them fell off.

Morebi police officer Rahul Tripathi told AFP that about 15 people had been taken to hospitals.

For his part, NK Machar, a local official for Reuters news agency, said that the deaths “rose to 132”.

The bridge The Machu River, which runs through Morbi, about 200 kilometers west of Ahmedabad, the largest city in Gujarat, was built during the period of British colonial rule. It has reopened to the public after months of maintenance.

“People fell on top of each other when the bridge receded. They gathered to celebrate Diwali (SS. ‘light’). ‘There are many women and children among the victims,'” an eyewitness told Indian media.

B said. Morbi police chief Dikavadia told AFP earlier that more than 130 people had been rescued.

necklace bridgeIt is 233 meters long, and was built in 1880, with materials brought to Gujarat from England, according to Indian media. According to information broadcast by the NDTV television network, it reopened to the public last Wednesday after seven months of maintenance work, without the issuance of a safety certificate from the authorities.

in rescue operation Divers, boats and dozens of military personnel are involved.

His Twitter services said Federal Prime Minister Narendra Modi, who is in Gujarat – where he came from and where he rose to political prominence – called for “urgent mobilization of rescue teams” and help for all victims.


Accidents on old infrastructure and poor maintenance are common in India, especially on bridges.

The 2016The collapse of an elevated pedestrian bridge over a busy road in the city of Kolkata (East) has killed at least 26 people.

The 2011At least 32 people died when the bridge they were on collapsed during a religious ceremony in northeastern India, about 30 kilometers from the city of Darjeeling.

Less than a week later, about 30 people were killed in the collapse of a pedestrian bridge linking two banks of a river in the (northeastern) state of Arunachal Pradesh.

The 2006At least 34 people were killed when a 150-year-old bridge collapsed on an express passenger train at a station in the state of Bihar (east).

The landslide in Crete: the community shocked – how the tragedy happened


Madonna: A star falls and falls…


Municipality of Athens: municipal cleaning and lighting fees reduced for 2023