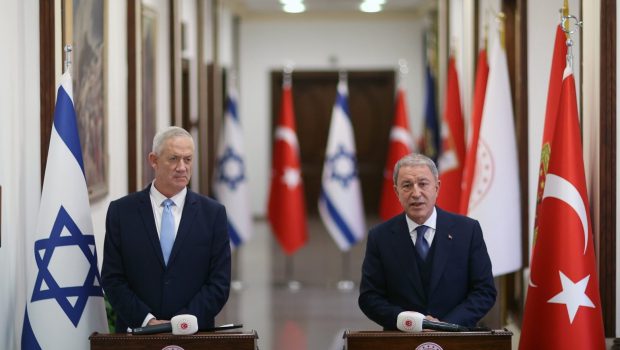 Another step towards normalizing relations turkey – Israel Recommends the visit of the Israeli Defense Minister to Turkey. Benny Gantz visited Ankara for the first time in 12 years on Friday, where he met Hulusi Akar.

But the Israeli defense minister also saw Erdogan, who does not usually meet with foreign ministers, except in special cases. The visit comes as a continuation of the contacts between the two countries and the efforts of the two sides to normalize relations.

Read also: The Americans in the skies of Karpasia – an episode with a Greek Cypriot farmer and Turkish soldiers

The two countries announced that they are reactivating their cooperation in defense affairs, while the joint statements were full of compliments and thanks.

Benny Gantz thanked the Turkish President for what the Turkish Defense Services have done in saving the lives of Israelis and members of the Jewish community in Turkey, noting that there is great potential for enhancing cooperation in the fields of security and defense.

According to the declarations from Ankara, the two sides discussed issues of strategic importance and agreed that the two countries should take steps towards regional security and prosperity.

Earlier, Gantz met with Hulusi Akar and said in their joint statements, “This year, as a result of our close contacts, we have succeeded in preventing a number of threats against Israelis and members of the Jewish community in Turkey.”

But the reaction also came from the United States, where Joe Biden welcomed the appointment of an Israeli ambassador to Turkey in the context of improving diplomatic relations between Ankara and Tel Aviv.

Contacts between Turkey and Israel have been largely secret and at a low-level diplomatic level, but progress has been made in recent months and senior security officials have held a series of consultations.

“The Middle East and the Eastern Mediterranean are changing. Alliances, some of which may have been considered impossible not so long ago, are being built in the wake of major threats, such as Iran,” the Israeli defense minister said purposefully.

Referring to Greece and Cyprus

But the Israeli minister did not hesitate to mention Greece and Cyprus in front of Hulusi Akar, declaring that the two countries are friends and that Tel Aviv maintains strong partnerships with them.

“While we maintain strong partnerships with our friends in Greece, Cyprus and the Gulf states, our relations with Turkey have also turned in a positive direction,” Mr. Gantz said.

Indeed, we can build bridges and reduce conflict for the benefit of all parties involved. In order to move forward, we must adopt a positive and consistent approach by maintaining an open dialogue in our relations.”

Minister of National Defense Halousi Agar: (The visit of the Israeli Defense Minister) “I would like to express that our relations will develop further, our dialogue will increase, and some solutions will be found, and this visit is very important because of this visit.”https://t.co/CT8NYbNnuc pic.twitter.com/tnFsWdC6K2

Israeli sources said in the previous days that relations between Greece and Israel were of strategic importance, and that any improvement in Israeli-Turkish relations would not be at the expense of the Greeks.

See also  “Land of Light”: “The result is amazing to say the least” by ONMT

According to the same sources, Greek-Israeli relations are strengthening and have strategic depth. The same sources specifically referred to the “strategic cooperation and friendship” between the two countries.

Noting that “we have common interests and mutual benefits” in bilateral relations, they noted that the more the relations develop, the closer they become. They note that the relationship is developing not only between the two governments, but also between the two societies. As they found, there are positive feelings on both sides of the people.

What indicates the close and depth of bilateral relations is the number of bilateral visits by officials of the two countries. With regard to the joint visits of Israeli officials with other countries, Greece ranks first in the world, according to the same sources. They added that visits between Greece and Israel are more than visits between Israel and the United States.

After that, they referred to Israel’s rapprochement with Turkey, noting that it is an important country in the region. They expressed Israel’s desire to reduce friction and reduce tensions in the region, describing the visit of the Israeli Defense Minister to Ankara as important.