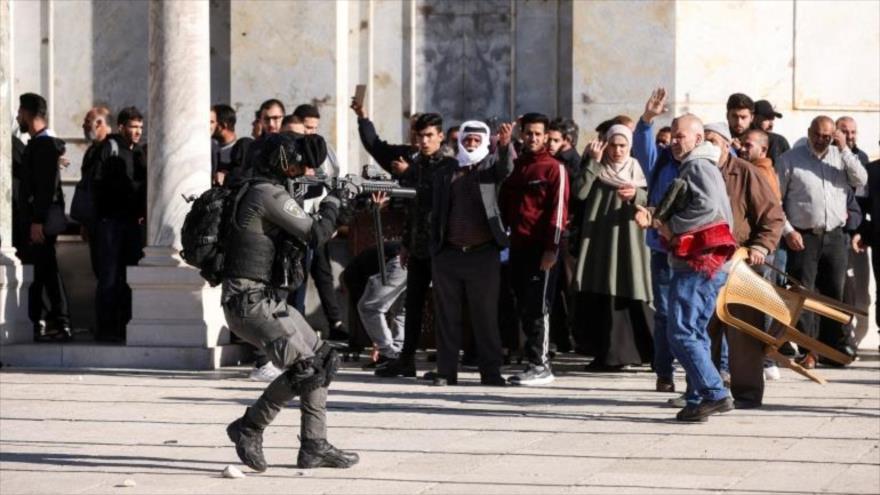 The official WAFA news agency reported that the police threw tears and sound bombs on the worshipers who were assembled within the religious premises of the third sacred al-Axa mosque for Muslims.

Last Friday, Israeli soldiers entered the interior of the mosque, sparking clashes with the Palestinians, who used stones for security.

Hundreds were arrested or injured during the riots, which drew strong condemnation from the Arab and Muslim worlds.

According to a news release, agents used force again this Monday to evacuate the courtyards of the premises.

In recent days, a Jewish organization has given money to believers of that religion who enter the Esplanade and sacrifice animals as part of the Pesach celebration, marking the beginning of the exodus of those people.

Under the covenants made decades ago, Jews were only allowed to enter the campus with multiple conditions, but could not pray.

This community makes its prayers on the west wall, also known as the Weeping or Weeping Wall, which is the outer barrier to the Esplanade and the only site of the second biblical temple built by King Herod.

However, under growing pressure from right-wing and radical Orthodox denominations, the number of Orthodox believers seeking to pray there has increased, which is considered provocative by Muslims.

The Israeli Prime Minister, NaftalI Bennett, confirmed last July that his comrades had the right to pray there, although a few days later his government backed down amid waves of criticism.

The shrine is revered by Muslims, they call it the Mosque Esplanade, and the Jews call it the Temple Mount.

For the former, the Al-Aqsa Mosque is inside it, and the latter, because its two Bible temples were built there.