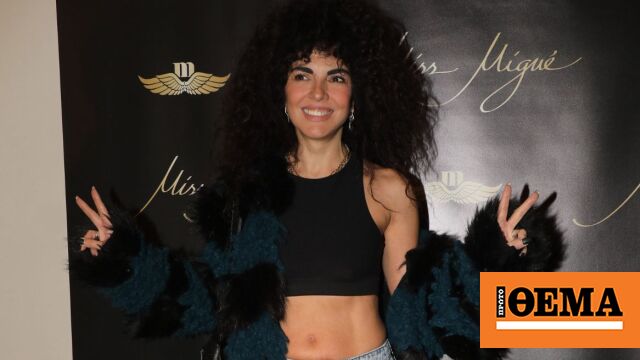 the Maria Solomo She talked about her love life, while commenting on the statements she has made so far.

The famous actress released a new podcast, in which she once again did not hesitate to reveal. He also referred to polygamy, which he spoke about again in the past and was hotly debated. Excerpts from her remarks were shown on “Our Breakfast”.

The conversation started referring to the psychotherapy she had done that had not succeeded in changing her desire to have 3-4 partners at the same time.

“I don’t know if I’m going to psychotherapy. I’ve been for 12 years and the polygamy part hasn’t been fixed. At different stages of my life I’ve needed 3-4 partnersHe said characteristically.

“It was nothing permanent, my life wasn’t like this and for sure, I couldn’t be with 3-4 partners for long, because above all I would get tired of this theater. I’d rather be hurt than cut myself. My ego can’t even stand it.” being caught.” accomplishment. As you will notice later, she is not interested in losing the person concerned, but she does not want to be in a position to give explanations to anyone.

“Damn it, if I’m going to lose the man, it can’t be blamed on me. I’m always right. I can’t have anyone come to me and say ‘Here’s madam, you’ve deceived us’ and I have nothing to say. I want to die there once, when I almost got caught.” Ali, I thought I was going to die. I wanted the earth to open up and swallow me.” finish.

The actress had earlier commented on the statement she made about infidelity on the Philippos Ioannou YouTube channel, Vebster.

“I said many years ago that I messed up all my relationships. But the reason I said that is because I was told so many times that I got dumped first and everyone cheated on me. I never look for cell phones, I go to superhuman lengths not to look at my partner’s cell phones .At a younger age I flirted a lot.Around 20-25 I had 3-4 guys at the same time.I grew up on periods…which brings me back again.I think we always act differently in life from time to time”, Maria Solomo said.

In her other statements on the “Super Katrina” program, she confirmed that she never wanted relationships exclusively, but they came without asking.

“I’m not bisexual. Relationships arise. I’m single and in a relationship, I want to have my freedom. I’m not going to lock myself in the house, and if anyone sees me outside, I’m not going to say ‘It’s not what you think’, but in fact it might not be. What I do not belong to anyone.” He said.