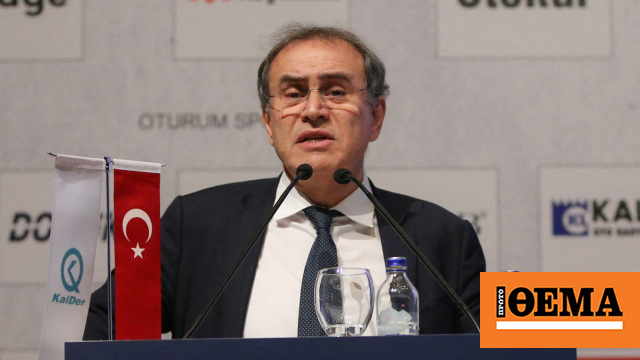 Someone here in Greece is well remembered for his pessimistic predictions about the future of Europe and the Greek crisis. religionThe Nouriel RobinI, focused on threats to all of humanity.

Of course, it’s still the same Pessimist – Although he doesn’t seem to enjoy the analyst title “Mr. Doom”.

say how The world has changed since its inception: “I grew up not worried about a war between great powers or a nuclear winter, as we had a lull between the Soviet Union and the West. I didn’t hear words about climate change or a global pandemic then. And nobody worried about robots taking over most jobs.

“We had freer trade and globalization, we lived in stable democracies, even if they weren’t perfect. The debt was very low, the population was not in such proportions, the pension system and health care were working. I grew up in such a world. And now I have to worry about all these things — just like everyone else.” These issues, he says, also matter to international institutions and he explains World War III has begun:

“At the International Monetary Fund meeting in New York, economic historian Niall Ferguson said in a speech there, that we would be lucky if we had an economic crisis like the 1970s — and not a war like the forties.” He emphasized that “the Third World War has already effectively begun, certainly in Ukraine and on Internet “.

In this context, the priorities of world leaders now are the war in Ukraine and the global recession with high inflation. Roubini says the eurozone “is already going through a recession, and I think it’s going to be long and ugly”.

Great powers must decide What alliances will they keep. He stressed that “Europe will not be able to be with China and the United States.”

Germany, too, says Roubini, made the mistake of relying too heavily on its energy dependence on Russia, and is now repeating the same mistake with China, which is increasing its economic, financial and trade power around the world.

As for her International EconomyRoubini says we are worse off than we were in the 70s. “At that time we didn’t have the same public and private debt. If central banks raised interest rates now to fight inflation, we would end up going bankrupt many companies, shadow banks and government institutions. Today there are more geopolitical shocks affecting the oil crisis. Just imagine the impact of A Chinese attack on Taiwan, which produces 50% of the world’s semiconductors and 80% of high-tech semiconductors. This would be a real shock to the world. Today we rely more on semiconductors than oil.”

He believes that central banks do not have many options. They can keep raising interest rates to fight inflation, or they can “disappear” and lower interest rates for fear of a recession, he says.

Finally, regarding the future of the Republic, Roubini says so She is very concerned – and she points to Greece.

“In crisis situations, there is always someone who plays the savior and blames foreigners for everything. That is exactly what Putin did with Ukraine. Erdogan can do the same with her Hellas Next year And trying to create a crisis because otherwise he might lose the elections. If Donald Trump runs again and loses the election, he could openly invite his white supporters to storm the Capitol. We could also see an escalation of violence in the United States and a real civil war.

The mother in Petralona described her “absolute, extreme nature at home”