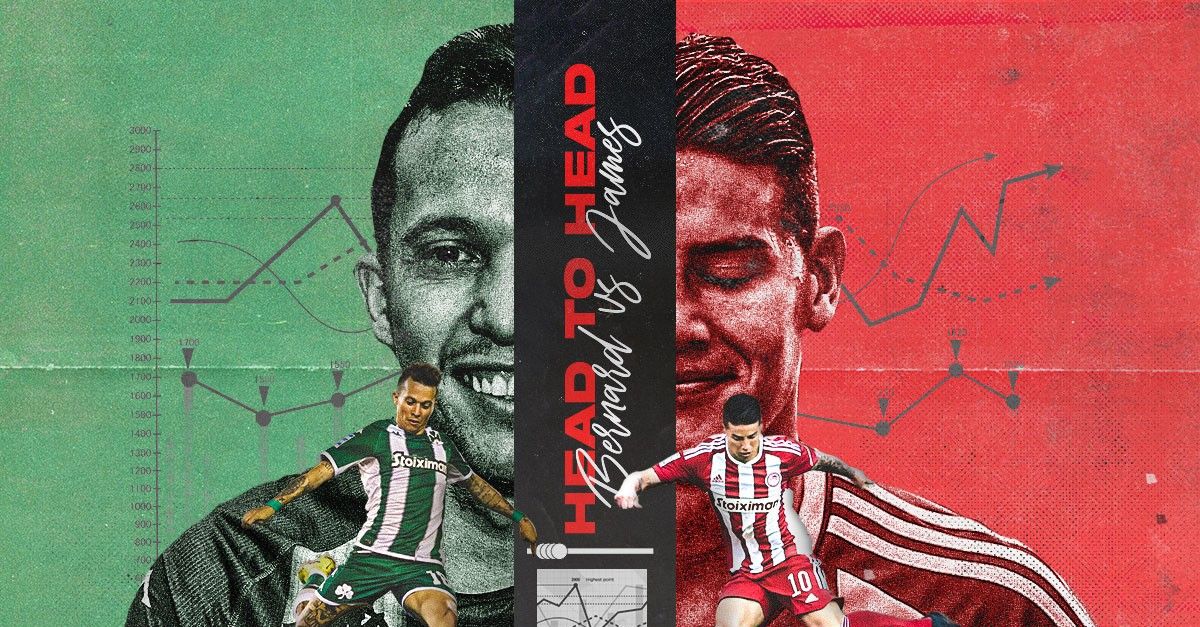 Panathinaikos and Olympiakos meet at Levoros Stadium in the eleventh round of the Premier League, with the highlight of the two stars, Bernard and James Rodriguez. Comparing two scores.

The Panathinaikos And the Olympic They cross their swords on the avenue (6/11, 19:30, Cosmot Sport 1 HDAnd the Live Sport 24) in the big derby of round 11 Premier League. The Greens want to continue their crazy run by achieving 11/11. On the other hand, red and white will look for the multiplier which will reduce the distance from the top.

The spotlight falls on two superstars who will fight their own battle on the playing field of Apostolos Nikolaidis. To two players with rich careers in major teams and leagues, who know very well what the derby is and how to manage it.

Bernard Duarte and James Rodriguez are two footballers we will adore in the Derby of Ages on Sunday night. The 30-year-old Brazilian and 31-year-old Colombian were among the biggest signings of the summer. Two players add brilliance to the much-needed Greek league. They have already shown examples of their abilities.

In the following table with its elements OPTA / PERFORMANCE STATISTICS You can see the comparison of football players in the most important categories related to their game.

The Brazilian Greens midfielder has played seven matches in the Premier League, which translates to 480 minutes, while James Rodriguez in particular has played 351 minutes in five matches.

At this time, the Colombian managed to score two goals. He scored a goal in the defeat against PAOK, while he opened the scoring against Lamia. Something Bernard hasn’t been able to do yet.

Of course, the Brazilian of the Greens got more passes, specifically three in number, compared to the two of the Colombians.

The Battle of Creation

As you can see in the rest of the categories, James Rodriguez mostly keeps the lead, even if by a small margin. In particular, the Colombian player has more accurate passes in attack, but also has more key passes, that is, diversions that lead to chances. Of course, when we think of key passes in open play, Bernard’s lead is small (7-6).

Hammes is more active in the Olympiacos match with 68 moves in 90 minutes, compared to the Brazilian’s 52. In fact, the Colombian has more ball movements every 90 minutes. But, in the attack’s forehand strokes, there is a relative balance, with the Colombian advancing again (4.6-4.3 per 90 minutes).

However, Bernard appears to be doing more work on the blocking part. This is proven by the recovery of football players. The Brazilian has 3.9 per 90 minutes, while James Rodriguez has 2.8.

Bernard needs to show his “teeth”, he needs Hammes

Bernard is entering more and more dynamically into the Panathinaikos equation. His image in the 5-1 win over Volos was a “statement” of what he can bring to the Greens. Ivan Jovanovic expects a similar performance, so that the Brazilian becomes more active and more active in the game of clover.

On the other hand, James Rodriguez has become indispensable to Mitchell. He is one of the most creative Olympiacos players in the league with a frequent goal-scoring participation. From his second game with the Red and White against OFI in Heraklion and after that he always makes sure to be there in every match, either by scoring or providing some assists.