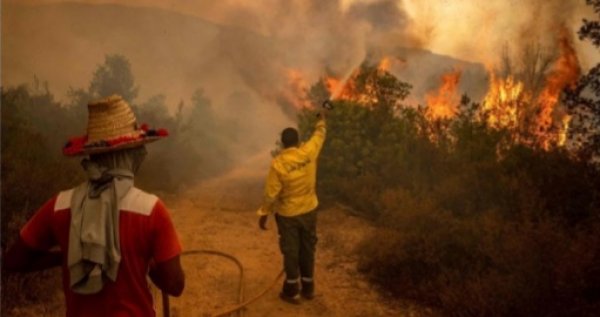 A person was killed and another injured, Monday, in a forest fire in the province of Tanouat, northern Morocco, as outbreaks re-emerged after a few days of calm, according to local authorities.

The two victims were volunteers who participated in the operations of the intervention teams to extinguish a fire in a forest in this governorate near Fez and Meknes, local sources identified.

The victim was taken to the hospital, but his life will not be in danger.

Local authorities added that firefighting services were working at night from Monday to Tuesday to control the fire after ensuring the safety of the villagers.

About 33 hectares of forest land were destroyed in the region.

Several outbreaks of varying size resumed in the last hours in northern Morocco, notably in the province of Larache, south of the Tangier-Mediterranean port, which was devastated by the recent devastating forest fires that left one dead.

On Friday, the government issued emergency aid of about 30 million euros to implement measures for the victims of forest fires and reduce their impact on agricultural activity and the environment.

The envelope of 290 million dirhams (28.8 million euros) should be used to rebuild destroyed homes and help livestock keepers and beekeepers in the affected areas, according to the Prime Minister’s Services.

The statement said it must also finance the reforestation of about 9,330 hectares and the rehabilitation of damaged fruit trees.

For comparison, 2,782 hectares of forest were destroyed by 285 fires in January-September 2021, mainly in the mountainous Rif region (North).

For Said Choukri, a Moroccan ecologist, these fires are largely caused by human causes, but the “reality of climate change” has contributed to this.

Morocco has suffered for several weeks from sweltering temperatures, in the context of exceptional drought and water stress.