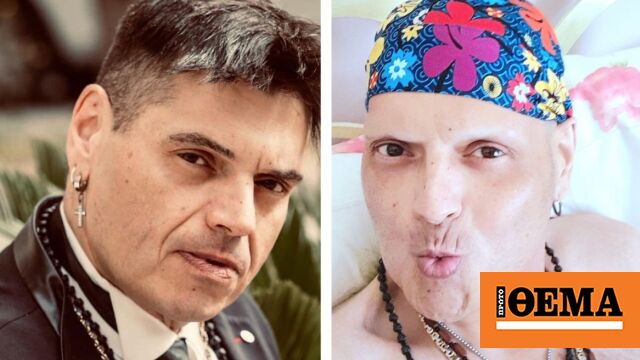 The George Deskalakis She continues to fight cancer and is facing this situation with great force.

“Good morning my love!!!! I wish you a happy and blessed weekend and always be healthy for the whole world!!! We are fighting our battle and we are already winning!!! Shall we chew??? Of course not.. With your love and God’s help we succeed!!! Amen 🙏 🙏🙏🙏🙏 “he wrote.


Last August, the singer underwent surgery and pleaded with his online friends to donate blood while in hospital. In fact, he noted that all this time his appearance had noticeably changed. Speaking on Monday in front of the “Super Katrina” show, he said: “This thing is hard. Let me tell you something, maybe I’ll get lucky. There are also moments when you bow down. You say ‘Yes, I will beat you and next year I will sing again.’ But there are also moments where you say ‘But why me?'” Why is it all about me?”Watch the video

Then he described how this adventure began for him. “It took us a while to find out what I had. I was talking to my best man, Nasos gomenides, and I told him I wasn’t feeling well. I felt lethargic and had something like a pimple under my armpit. We don’t care much about something, even though it hurts, especially When I grabbed it. I was singing normally, but my birthday came and I had phlegm, I lost weight, I lost my appetite. I was singing and I fell. I said I wasn’t feeling well. They told me to go to the hospital and I said no. It was the end of July, and I asked My mother had to go to the hospital, because I wasn’t breathing. We did an X-ray and on the third X-ray, quite by chance, they found cancer in the lymph nodes. That was the reason I had all the other problems. I was told we might be way ahead of the worst. Only God knows if I deserve to live.” He said the conclusion.

The Matthew Giannullis It was he who helped him in his fight and stood by his side. The artist took the initiative and succeeded in bringing together famous singers to give a concert for Giorgos Daskalakis at “Aioneri” in Peristeri.

The money collected was allocated to the singer to cover the costs of chemotherapy.