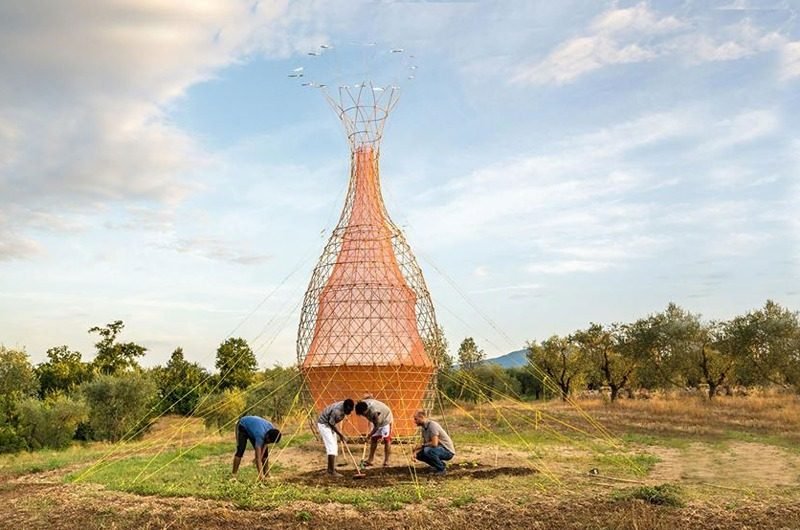 What if we could do like some insects and plants that have evolved the ability to collect and store the water in the air to survive in the most hostile environments?

Well, it is made possible today thanks to the Warka Tower, or the Warka Water Tower, an innovation that is as impressive as it is useful.

Where did the idea come from?

The Warka Tower, designed by Italian architect Arturo Vittori, is a bamboo tower capable of capturing moisture from the air. The idea came to him when he was in architecture school in Addis Ababa, and every day he saw women and children walking tens of kilometers on foot to draw water from unhealthy sources. After several hours of traveling to the nearest source, the recovered water is often contaminated with human and animal waste.

Shocked, the architect decides to get involved and find a solution to get to the water. This is how the Warka Tower project was born, a bamboo structure designed to collect and harvest potable water from the air.

The project’s name, ‘Warka’, comes from the Warka tree, a giant wild fig tree native to Ethiopia. Like a tree, this tower is an important cornerstone of the local community, providing the primary resource for water, and providing a social place where people can gather under the shade of an awning for education and public meetings.

Since then, with his architecture and vision team, Fituri has developed a series of experimental prototypes and add-on installations, and installed his first experimental tower in the southern Ethiopian rural village of Dorze, in May 2015, which continues to grow.

How does Warka Tower work?

Warka Tower is a lightweight, easy-to-build system that allows fog, moisture and precipitation to collect on roofs. Performance depends on weather conditions, but each tower can provide the community with up to 100 liters of water per day.

The tower is made of a bamboo frame supporting a polyester mesh material inside, which is inexpensive and easy to build. Atmospheric water vapor condenses from rain, fog, or dew on the cold surface of the mesh, forming droplets of liquid water that flow into a reservoir at the bottom of the structure. A cloth canopy shades the lower parts of the tower to prevent collected water from evaporating. Performance depends on weather conditions, but each tower can provide the community with up to 100 liters of water per day.

Warka Tower is made of 100% biodegradable and recyclable materials. The designers’ philosophy is to use local materials and traditional techniques as much as possible. The tower was also designed to be easily built using simple tools and maintained by local villagers without the need for scaffolding or power tools.

This means that Warka Tower can be built in 4 weeks by 8 people and then erected in one day by a team of 16 people. After installation, disassembly and reassembly of the tower for maintenance requires only two hours by the same team. In addition, the structure consists of six modules that are fitted together one by one, from bottom to top.

Altogether, a water tower installation costs between $500 and $1,000, less than a quarter of the cost of network toilets, which cost about $2,200 to install and more maintenance. Since the design of the Warka Tower is based primarily on standards, it can be easily adapted and implemented in a variety of different situations.

The Warka Water project tries to help different isolated communities in places like Haiti, Madagascar, Colombia, Brazil, India and even Cameroon. This expansion not only encouraged experimentation with other local materials, such as palm fronds, but also led to a series of additional projects that sought to address other important issues.

The project has developed a modular system called W-solar that turns any tower in Warka into a source of electricity, adding solar panels to provide lighting and power to charge mobile devices. Then there’s the W-garden, a system that uses harvested water to produce food, and there’s also the W-toilet to improve sanitation and hygiene. Note that there are currently Warka Tower projects in Ethiopia, Haiti and Togo.

The World Health Organization estimates that 1.1 billion people do not have access to safe drinking water. Inspired by nature and local traditions, the Warka Tower is an environmental promise to put an end to problems with access to drinking water. Air always contains some amount of water vapor, regardless of ambient temperatures and local humidity conditions, so we can produce water from air almost anywhere in the world. The most fertile land for the installation of these towers.