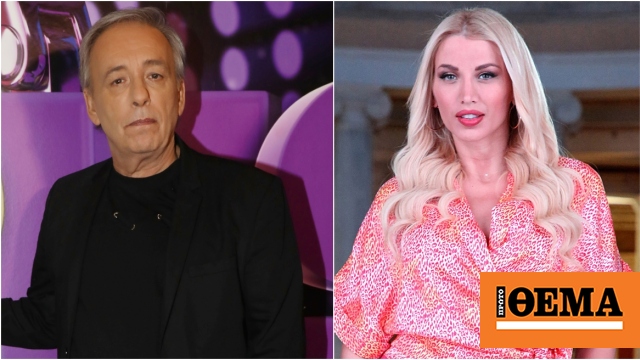 The Andreas Microtsikos Comment on his statements Natalia Germano On yesterday’s show, about the professional behavior he stuck to Constantina Spiropolo And the power she got in the early years of her television career.

And through the “Super Katrina” program, the presenter did not stop his annoyance, as he said that a group of people lost their jobs because of it.

«What I know about Konstantina Spyropoulou without ever meeting her and seeing her on TV for ten minutes, is that there is a team of technicians, cameras, panelists, and presenters who have lost their jobs. People who lost their jobs to a talentless creature. I do not agree with NataliaHe said at first.


«I can’t play the game of ghosts if the man who gave her the power is gone. What I want to say is that when people lose their jobs because of a spoiled person, it’s not “the one without fault who threw the first stone”. He’s a poisonous guy who climbed some stairs and ate heads. That for me is writingAndreas Microtsikos added. “Whoever gave it the authority is a moral author and is guilty of committing a physical author. Turn a brainless girl into a killer. “That’s my opinion,” he said, adding, “Here, half of them have lost their jobs, it’s a shame. Whenever I go out I listen to them.”».

Natalia Germano and her colleagues, through the program “Things do not get better”, commented on the interview of Konstantina Spiropollo with Eleni Menigaki.

On the occasion of the pregnant announcer’s statements, that she had made mistakes and that she is now ashamed to meet a lot of people, Natalia Germano took the opportunity and noted that in Constantina Spiropollo, She was given strength at a very young age.


«She was with me four to four, not in the form of an apology, we had a lot of chats. In all the years since the show got together, a lot has been said about the power he has. My question is this: It is very easy to talk about Constantina’s behavior. Nobody says who gave her this power. Nobody tells this girl who was 23 years old, that someone gave her the freedom to act like a queen. Because it’s always the little girl’s fault and not the one who says to her, “Get out baby, do whatever you want, chase whoever you want.” This annoys meThe presenter said at the beginning

«Somehow he got the power. So it’s not just one person’s fault. It’s been 10 years, she’s a new, sinless girl who threw the first stone. I, too, made my own mistakes and realize her right to go back in time and think about what happened and start a new chapter in her life with her husband. Let’s not relive the same venomous vengeance over and over againShe confirmed in the conclusion of her statements.

Tsunes: What will the United States do if Turkey attacks Greece