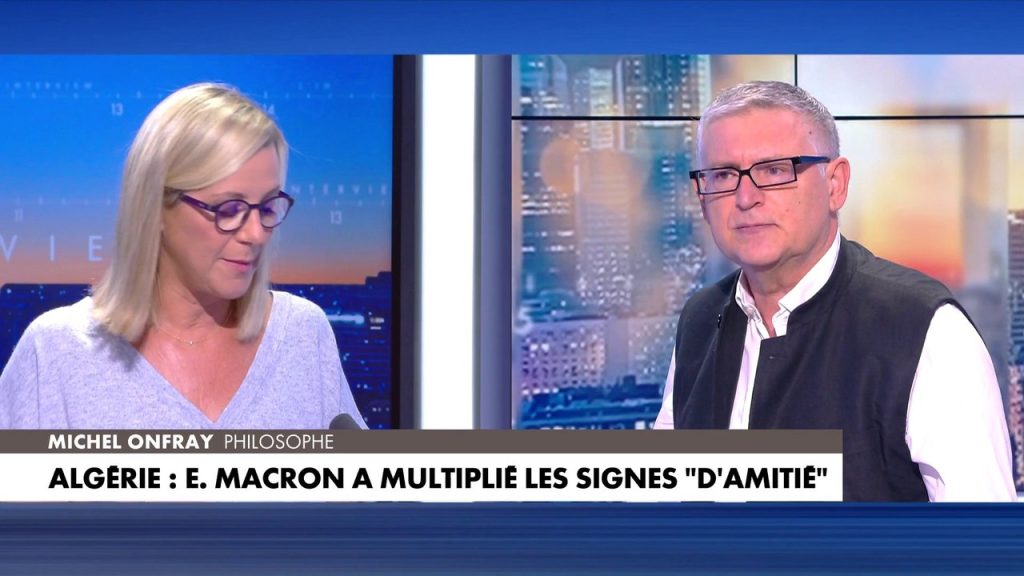 A few days after Emmanuel Macron’s visit to Algeria, French philosopher Michel Onfray responded harshly to a French channel group on the relationship between France and the ruling regime in Algeria, which he described as “the mafia”.

Philosopher Michel Onfray on the set of the program La Matinale, hosted by Laurence Ferrari, on the French channel CNEWS, Tuesday, August 30, 2022, called for his words regarding President Emmanuel Macron’s recent trip to Algeria.

Come to present his new book Strength and decadence. Civilization Politics In La Matinale, Michel Onfray returned to Emmanuel Macron’s trip to Algeria, where he explained his view on the relations between Algeria and France.

Political and ideological relations explained by the philosopher in the light of a passage from his new book in which he wrote: “We will drown because we French no longer love each other, and cherish what defiles us, defiles us, spoils us, humiliates us, destroys us.”

Based on this excerpt, Michel Onfray criticizes the Algerian regime for making France responsible for all ills and addresses the topic of the country’s independence, believing that they “did nothing with their revolution”. , with a few exceptions mentioned by the philosopher in two points: “They veiled the women and collapsed intellectually.”

Based on Simone de Beauvoir’s book, entirelypublished in 1972, Michel Onfray evokes “those who defended the FLN and who, after ten years of national independence in Algeria, say that we did not help the Algerians gain their independence until women wear the veil, leave school, and that everyone begins to speak the language and that, in the end, the dominant ideology is Islamism.”

See also  From the squares of the “revolution” to the parliament, the march of two elected Lebanese officials

“We know very well that this country has hated us since 1962,” he continued.

And this Algerian problem is in one word for Michel Onfray, the “mafia” in power. “I’m sorry, but I saw a little mafia there and if things don’t go well in Algeria – the poor Algerian people and the Algerian people live – it is because there is a mafia. And this mafia, we will ask forgiveness, we will apologize for it, we will look for people who write history so that the force can Find her account,” he explains, recalling a journey in Camus’s footsteps in Algeria.

While writing a philosophical essay on this author (libertarian regimepublished in 2012), Onfray recalls that he “discovered by turning on the television in the evening at 8 pm that we were still in 1960, that the FLN existed, still ruling and explaining to us that if Algeria is because of the French” .

It also bounced back on Emmanuel Macron’s declaration called for by Abdelmadjid Tebboune in Algeria, in which the French president considered that “what remains between France and Algeria is a story of respect and friendship and I dare a love story,” Michel Onfray. A strong reaction by concluding that “a love story, he (Emmanuel Macron) does not know what it is. This man did not like to talk about love between these two countries where we are in hegemony.”

See also  Crimea: Bayan - Podolak bomb - The explosion on the bridge was just the beginning

Instead of talking about love, it is more appropriate for Michel Onfray to show his “manliness” in order to be able to deal with the “pride” of the Algerian people who have a certain conception of honor and to whom we should talk. We tell him we will “defend him against the mafia”.

And in conclusion, “there is money in Algeria, the problem is not France. There is oil rent, it is even the expression of Mr. Macron. With this gas and this oil, they will have the possibility to make a prosperous country. This country is not prosperous, it is not the fault of the French who left this country in 1962 “.