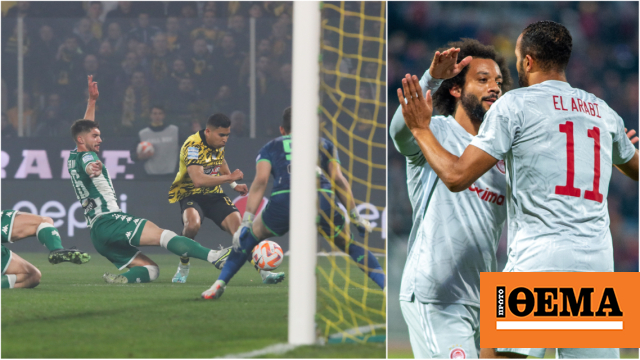 On her seventeenth match day Super League 1 She was after both Panathinaikos He saw the resistance he had been building since the start of the season… crumble! in new philadelphia, Eck With Pineda’s goal (Brignoli’s great responsibility) he won the derby 1-0 and … reduced the gap from first place to 4 points, with “Alfalfa” always leading the points race.

It was not a derby we will remember for years. Without much pace, with many breaks and few good stages. But also an unbridled beauty at the end with Ioannidis’ goal in the 98th minute and the missed opportunity for the hat-trick to equalize in the next stage with a penalty kick won by Dicevalos and Brignoli’s intervention in the execution of Levi Garcia. However, this is of little importance to the federation since they achieved their goal and now the tournament is gaining more attention as they entered the battle for good and PAOK With Olympiacos!

In Volos o Olympic He had no problem walking past lunchtime on Sunday as he sealed the winning three points midway through the first half after Bale’s penalty and Inbom Hwang’s 22nd-minute goal only made it 0-2. At the end of the half, Bakabu scored another goal with a header for the 0-3 lead. In the replay, Olympiacos slowed down, as it was safely holding the score, but found a goal again with Al-Arabi, who made up the final and victorious 4-0 to Panthessalykos.

Aris is now alone in fifth place after an easy 3-0 win over Asteras Tripoli. The Thessalonians presented themselves on the pitch with their feet on the gas and after the half hour mark they were leading 2-0 (goals by Manu García and Fabiano) and the mediocre celebration was essentially over. At the end of the match, Camacho also found the net and made the final 3-0 with the yellow team overtaking Volos in the standings and now in fifth place.

Watch the best highlights of the match here

An easy victory for Atromitos in Peristeri, with a score of 2-0, against the bottom Ionians, who left the match morning with 10 men due to the sending off of Chipsach and being late in the score due to a penalty kick from Kjartansson. Under these circumstances, it was easier for the hosts to continue, who, in the 59th minute, with a Rotary goal… settled the three precious points that brought them back to seventh place. On the other hand, Ionikos continues his problematic image and remains… stuck in the last place on the scoreboard!

Results, standings and the rest of the 17th round of the Premier League:

Open conflict for Roman Catholics: “There is a devil inside the Vatican,” says the archbishop

New revelations from Prince Harry: William grabbed the shirt twice in front of our dad