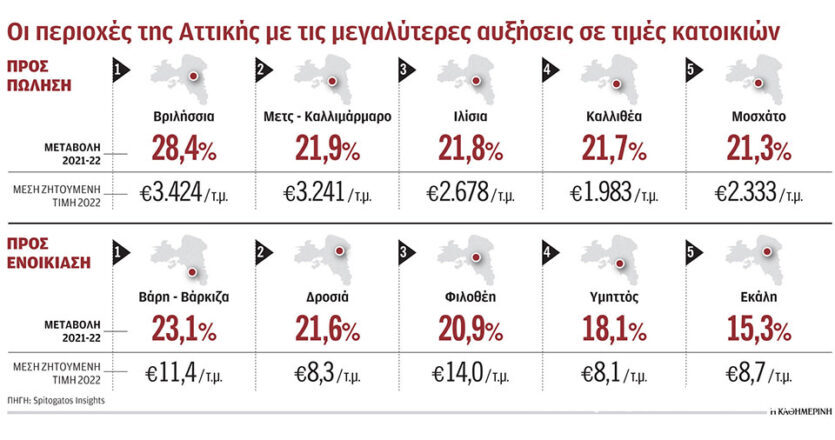 Selling price increases of housing Up to 28.4% in regions such as Vrilissia market record Real estate During 2022. In the northern suburbs area, the average asking price is now €3,425/sqm.

according to its price index data Online classifieds platform Spitogatos (SPI), a significant increase was also observed in regions From the center of Athens, as in Metis and in the Kalimarmaro region. There, the average asking price is now €3,240/sqm, which is almost 22% higher than in 2021. Nationwide, the average increase in asking sales prices in 2022 is 7.2% compared to the previous year, while in the fourth quarter of 2022 it was the average annual increase. The increase was 8%.

The most expensive real estate is located in the Vouliagmeni areaThe average asking price rose by 19% last year to 5,933 euros/sqm. Accordingly, in the center of Athens are the districts of the Historic Center and Kolonaki At the top of the list with the highest prices.

According to the relevant analysis, “civilian interventions in Central Athens, within the framework of the Grand Promenade projects, but also the upcoming redevelopment and expansion projects of metro stations in the surrounding areas, have contributed to an even greater increase in average demanded real estate prices. Indicatively, in relation to 2021, there have been impressive increases in property sales prices for Mets (+22%), Alicia (+21%), and Judy (+20%).”

The significant rise in selected areas of the center and the northern suburbs as well as the southern suburbs has been attributed to the return of foreign buyers, but also to the efforts of many Greeks to proceed with the purchase of a property, before interest rates rose to a prohibitive point in securing bank financing. According to Bank of England data, during the nine months of 2022, foreign investors placed a total of 1.27 billion euros, an increase of 60% compared to the same period in 2021.

In fact, the pace of foreign investment in the real estate market has returned to the level it was at before the pandemic and is expected to exceed it. In 2019, total inflows from abroad amounted to €1.45 billion.

Foreigners prefer real estate in the center of Athens, especially near tourist attractions, with the aim of exploiting it, either through short-term leases or through long-term contracts, while the number of digital “nomads” who rent property for several months of the year is steadily increasing.

At the same time, a large number of foreign investors choose the southern suburban areas, looking forward to future capital gains from the development of the Athenian Riviera, centered on Hellinikon. Accordingly, Greek buyers are moving to selected areas of the northern suburbs, focusing on points with the highest possible concentration of younger properties, whether newly built or up to 15-20 years old.

Return of foreign buyers, redevelopment projects and expectations due to metro, the main reasons.

in Thessaloniki The “champions” are the 40 churches, Agios Pavlos and Tumba, with an increase in the average real estate sale price compared to 2021 by 39%, 24% and 20%, respectively. In the rest of Greece, larger property sales price increases than in 2021 were found in Preveza, Sporades, Halkidiki, Trikala, Larissa, Chania, Corinth and the Cyclades.

According to Mr. Dimitris Milacherinos, Managing Director of Spitogatos.gr, “Based on the data so far, the trend of demand is still upward, while the real estate trajectory in Greece is more dynamic compared to other European countries where there is a recession, for example in Germany. However , There are many challenges facing real estate in the new year, such as the development of inflation, mortgage interest rates, management of problem loans, but also programs to support the acquisition of the first home, in the election year.

According to Spitogatos, “The ever-popular areas of Attica have seen larger increases in rental prices, which indicates that the areas of high investment interest maintain their great strength. It cannot be denied that the upcoming extension of the metro network with Line 4 has already affected the areas around the new stations.” .

Indicatively, in Kypseli, Galati, Ilicia and Exarcheia, there was an average increase of +8.5% in apartment rent prices compared to 2021. Areas in the eastern suburbs of Attica showed a significant increase in rental prices. Indicatively, there have been rent price increases in Glica Nera, Jiraca and Lotsa of 20%, 15% and 8%, respectively.