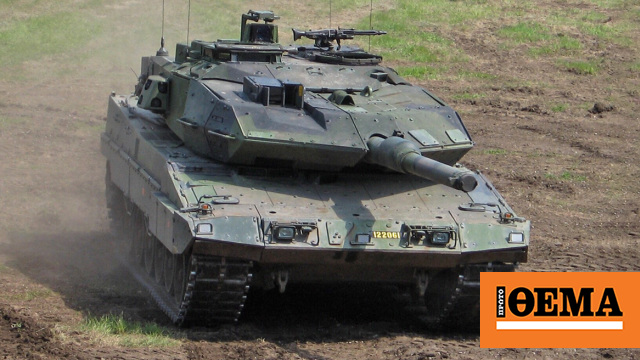 In the announcement that Germany He will send tanks Leopard 2 in Ukraine On Wednesday afternoon (25/1), the representative of the German government, Steffen Heberstreet, confirmed this Information released in the last few hours.

At the same time, Berlin gives the “green light” to re-export these tanks from other allied countries. As Sky News notes, this decision paves the way for countries like Polandthe Spain and the Norway To send the same tanks to Ukraine. “This decision follows” the line of “supporting Ukraine in the best possible way,” El-Sayed said. Olaf Soules.

The goal, according to the German government representative, is to deploy two Leopard 2 battalions with Germany taking the first step by sending a total of 14 such tanks.

the Germany It will also train the Ukrainian soldiers who will occupy the positions of the pilots, with Berlin also providing logistical support and ammunition.

As explained by the German Minister of Defense, the first Leopard 2 tank is expected to be delivered to Ukraine within three months.

Soltz: We will supply tanks to Ukraine

He confirmed the reports of the last hours and Olaf Solz on Leopard 2 tanks sent to UkraineAnd also after the pressure of the Baltic states.

«We took it step by step and led us to this decisionsaid the German chancellor.

«We will supply tanks to UkraineHe stressed while continuing to say that Germany had done the right thing.

In the Bundestag, the German chancellor made it clear that borders cannot be changed by force.

See also  50 years after the tragedy, survivors remember how they became... cannibals to make a living

«That is why it is right, together with our partners, to extend our support to Ukraineconfirmed.

Speaking about the decision to send tanks and giving permission to other countries to send their tanks, Soltz told about A.A “right start”.

«There are citizens of our country who are concerned. To these compatriots I want to say: believe me! Trust the federal government!He completed.

«It would be a huge mistake to act alone, we must coordinate with our alliesThe German Chancellor recalled during his speech.

Recall that on Tuesday Poland had made an official request to Germany To re-export the Leopard 2 tanks as announced by Polish Defense Minister Mariusz Balzac.

Balzac noted on Twitter that “Germany has already received our request to accept the transfer of Leopard 2 tanks to Ukraine,” while calling on Berlin to join the “coalition of countries supporting Ukraine using the Leopard 2.” “This is our common goal, because the security of all of Europe is at stake,” the Polish minister stressed.

In the first reaction, the Russian embassy in Germany announced that Berlin’s decision to agree to deliver Leopard 2 tanks to Ukraine means that it abandons its “historic responsibility towards Russia” arising from Nazi crimes during World War II.

The embassy said in a statement that the tank shipments involved would escalate the conflict to a new level and lead to a “permanent escalation”.

“This very dangerous decision will raise the conflict to a new level of confrontation and contradicts the statements of German politicians regarding the Federal Republic of Germany’s reluctance to be drawn into it,” said Russian Ambassador Sergei Netzayev.

“It destroys what remains of mutual trust, causes irreparable damage to the already deplorable state of Russian-German relations and casts doubt on the possibility of their normalization in the foreseeable future,” he added.

Russia has already declared that such weapons will only prolong the war and suffering in Ukraine and that the West is “deceiving itself” if it thinks otherwise.

“The choice of Berlin marks the final refusal of the Federal Republic of Germany to recognize its historic responsibility towards our people for the terrible and immortal crimes of Nazism during the Great Patriotic War, and evokes in oblivion the difficult path of post-war reconciliation between the Russians and the Germans.”

And the Russian ambassador added that “with the consent of the German command, tanks with German crosses will again be sent to the” eastern front “, which will inevitably lead to the death of not only Russian soldiers, but also the civilian population.”

For its part, the Kremlin commented through its spokesperson which Abrams tanks would be sent to it Ukraine from United States of America I will “burn”, Saying that the tasks proposed one Expensive madness. Speaking in regular update journalists Kremlin spokesman Dmitry Peskov said that while Abrams’ assignments had not been confirmed, However it would be a waste of money.

“I’m sure a lot Experts understand the absurdity of this idea. The plan is disruptive in terms of technology,” he said. “But most of all, it overestimates the potential it will bring to the Ukrainian military. He added that these tanks burn like any other tanks.

Watch the video: Papadakis stopped the fight between Georgiadis and Zakariadis… whistle