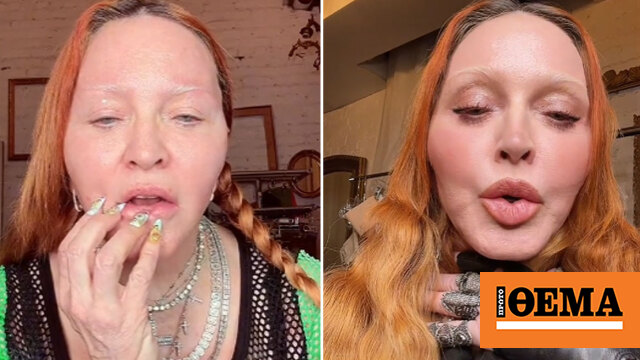 After extensive reviews and negative comments about the filters you use on social media that tarnish their image, Madonna She decided to show her face to her fans without makeup and unnecessary additives.

The pop queen posted a video on her personal TikTok account in which she wears a green fishing net and stares at herself in front of the camera.

At that time he heard him say: “Oh my God, why did you do that?” Referring to the image of her face.

Madonna in the mentioned video looks “puffy”, while her face shows some red marks that look like freckles.

Everyone wonders what exactly the singer “touched” on her face and it just seems so weird. Surgeons from abroad recently spoke to Page Six and after “studying” her photos, explained what operations the star may have undergone.

“When I first saw the post, like many others, I was very surprised by what it looked like,” He initially said Dr. Ehsan Ali, CEO of Beverly Hills Concierge Doctor and Urgent Care, before adding that she could distinguish about 9 surgeries on her face.

“She has definitely had a facelift, her skin is tight and taut, no sagging or wrinkles. The facelift also changes the shape of Madonna’s eyes, and they are pulled upwards. Also, she definitely had a rhinoplasty. Her nose looks very narrow with a pointed tip. Not to mention Botox, “ Dr. says. Ehsan Ali.

She even explained that the botox she had done was evidenced by “no wrinkles on her face.” “She also manipulated her cheekbones, and she probably had a hyaluronic filler. She looks completely different and stands out,” Says.

Dr. Pamela Weinberger of Plump Cosmetics and Injectables in Miami agrees that the pop star has had treatments with injections on her cheekbones and suggests that overuse of fillers over time may be what gives Madonna an “unnatural” view.

Finally, he mentioned that something else the singer might have “raised” in her face was her eyebrows, as in most of her photos they appear to be higher than the “area” of her face, where they were in the past.

“If you measure from the top of her eyebrows to the top of her hairline, that distance will be more than three fingers. This indicates that she underwent a brow lift. The procedure is done through incisions in the hairline in order to lift the entire face back.” She explains and adds that her chin also appears to be no longer normal, but the result of this operation disappears within three months.

Calculating the cost of the above operations, plastic surgeons estimate that Madonna must have spent about 30 thousand dollars to “correct” her image.

The landslide in Crete: the community shocked – how the tragedy happened


Madonna: A star falls and falls…


Municipality of Athens: municipal cleaning and lighting fees reduced for 2023