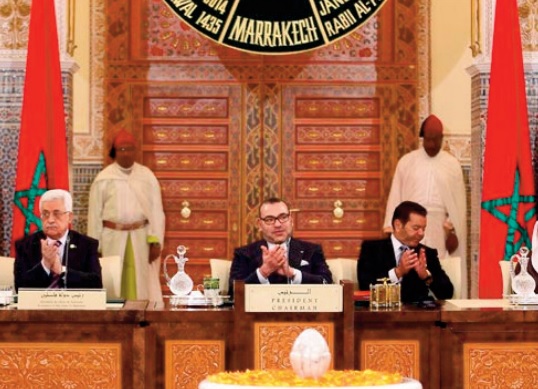 The response of the international community to Algeria’s shame and its insistence on the Al-Quds Committee, because it is chaired by His Majesty King Mohammed VI, was immediate and direct at the same time in both Riyadh and New York. Indeed, the statement adopted by the Executive Committee of the Organization of Islamic Cooperation (OIC), urgently convened in Riyadh on Monday morning, had the effect of a bomb that toppled Algeria from its feet and reinforced its international isolation. The Joint Islamic Committee, on which the Al Quds Committee depends, simply rejected the madness of Algeria and centralized the Committee under the leadership of its Chairman, His Majesty King Mohammed VI. Moreover, the central role of His Majesty the King, as Chairman of the Al-Quds Committee, resonated in the Security Council on Monday also during its quarterly discussion of the Palestinian issue. The ambassadors of many African, Arab and Islamic countries highlighted the importance of the Al-Quds Committee and greatly praised the King’s work in defending the Palestinian cause, the Holy City and its residents. Their statements constituted a resounding denial of Algeria’s lies against the Committee and a blatant repudiation of its hateful anti-Moroccan drift and taking hostages of the Palestinian cause with the sole purpose of undermining Morocco. Thus, the representative of Gabon, a member of the Security Council, praised the role of His Majesty King Mohammed VI in his capacity as Chairman of the Al-Quds Committee in preserving the special status of the Holy City as a symbol of the common human heritage. Peaceful coexistence between the followers of the three monotheistic religions, and a place for dialogue and mutual respect. “It is necessary to preserve the peculiarities of Jerusalem as a city of peaceful coexistence as emphasized in the Appeal of Jerusalem signed by His Majesty King Mohammed VI with His Holiness Pope Francis during his visit to Rabat on March 30, 2019,” he said. For his part, the representative of the United Arab Emirates, who is also a member of the Security Council, highlighted the efforts made by the Al-Quds Committee headed by His Majesty the King, in order to preserve and support the Holy City. to its people. The same story with the representative of Egypt who stressed the need to rely on all Arab and Islamic references concerned with Jerusalem, especially the Al-Quds Committee headed by His Majesty King Mohammed VI. For his part, the representative of the Kingdom of Saudi Arabia highlighted the important role played by the Al-Quds Committee and its Chairman in preserving the privacy of the Holy City and protecting its residents. Bahrain shares the same position, as its representative stressed the importance of this committee’s role in defending the Palestinian cause and the holy city. For her part, the representative of Qatar stressed the importance of supporting the Holy City and Jerusalemites, noting in this regard the role of the Al-Quds Committee headed by His Majesty the King. In the same context, the representative of Indonesia noted the important role played by the committee in preserving the holy city, recalling the call for Jerusalem signed by His Majesty the King and Pope Francis in March 2019 in Rabat in favor of preserving privacy. The character of the city as a symbol of tolerance and mutual respect between the three monotheistic religions. The permanent observer of the League of Arab States stressed the need to support the role of the Al-Quds Committee. Finally, at the height of blatant diplomatic excesses, Algeria, stunned for a week before the Al-Quds Committee and its Chairman at all meetings of the regional groups, entered into guilty silence during Monday’s consideration of the Palestinian issue before. Security Council. Indeed, all the delegations noted with great surprise that after blocking the statements of the Arab groups, the Organization of the Islamic Conference and the Non-Aligned Movement, under the false pretext of requesting a meeting of the Al-Quds Committee, the Ambassador of Algeria did not dare, nor did he have the political courage to make such a request in his national declaration, revealing About his real anti-Moroccan goals that only UN member states know very well.