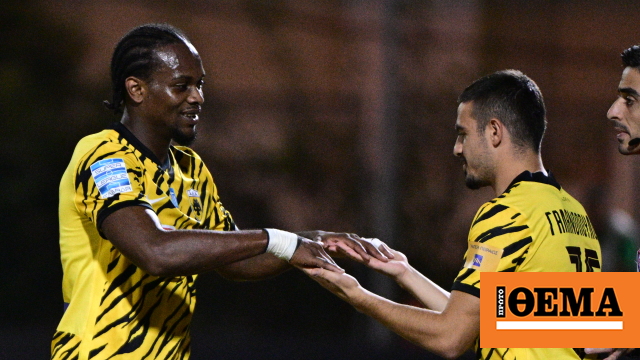 AEK is still in pursuit of Major Panathinaikos, who scored twice by MVP Levia Garcia in the 50′ with a header and in the 70′ from the penalty spot, passed the yellow and black with the double (0-2) from the Levadeaikos home and celebrated their fifth win in the league series and sixth in a row including So winning the cup. Al Ittihad was lazy in the first half against Viotia who closed spaces very well, but in the second half AEK with momentum and more energy found a way to leave Livadia with the three points and celebrate victory with her 2,500 friends who supported her in a heartbeat in the stands.

This is how Felich and Almeida began
For Levadeiakos, Jasminko Velic started with Markovic in goal, Panagiotou, Vinicius, Liaga and Tsapra left to right in defence, Mejia and Hammond in the center of the midfield with Nika in front of them, Lua Lua and Toro at the ends and Moutinho in attack. The absences of Mohammadi and Hajisavi left AEK without a clear left-back for the match against Livadiakos and had Matias Almeida cover the position on the left side of the defense with Sidibe. From there, the main selections for recent league matches have returned to the original AEK lineup, most of whom had taken a break in the cup match against PAS Ioannina. Athanasiadis in goal, Vida, Mukudi and Rota completed the defense quad, Simanski was selected in the cut-off role with Gacinovic on the left, Eliasson on the right and Pineda slightly ahead, while in attack alongside Araujo Livia Garcia returned to the eleven.

From the very first minutes, AEK wanted to impose its own rhythm with Levadeiakos looking to shoot at the counter. But the lack of inspiration on the part of the Federation combined with the weakness of the pitch, as well as the fact that the home team closed spaces very well, did not allow the yellow and black to threaten. It is characteristic that the first good moment of the match on the part of AEK came in the 20th minute when Araujo hit the ball outside the area and tried a long shot, as the ball passed past Markovic’s crossbar, and five minutes later I found a shot from Jasenovic. Levadeiakou guard on hand.

Al Ittihad may not have been threatened but they didn’t get anything creative out of the midfield with Vilic’s strongmen in defense and midfield having stopped…the coaches. It was clear that AEK was going to have to get something out of some individual energy and this went to put them ahead when Jasenovic fired in the 42nd minute for Pineda and the latter took a powerful shot just outside the area with the ball passes over her. horizontal.

Livia Garcia “clean” for three points for AEK in Livadia

AEK entered the second half with more energy and in the 47th minute they made it 0-1 when Szymanski turned inside the small area in favor of Levia Garcia, the latter set the show but the ball went against Vinicius who saved the hosts. The momentum with which AEK started the second half saw the yellow and black team take the lead three minutes later. Simanski stole high, passed Eliasson and made a beautiful cross at the height of the small area and found Livia who headed 0-1 in the 50th minute. The advance combined with AEK’s design gave “wings” to the Almeida players, as Araujo threatened in the 55th minute with a diagonal shot in the movement Passing through the area Yellow and black are now completely in control of the field, creating partnerships. Livadia’s first final came in the 65th minute with a shot from Loa Loa that did not alarm Athanasiades, but the dominant AEK scored the second goal shortly after to seal the victory in Livadia. Hammond dropped Jasinovic in the area, Vergteis signaled a penalty and then the VAR was called in to review it. His decision did not change, and Livia Garcia, who took the execution, scored a penalty and with his second personal goal in the match, made it 0-2 in the 70th minute.

Bouyot, of course, could have reduced the result immediately, but Moutinho’s pass from a side position in the 72nd minute passed past the crossbar of Athanasiades, who was unable to respond, while in the 80th minute, from Moutinho’s turn, Peter could not. To score. Drop to send the ball into the net from close range. This was the only time AEK was actually under threat, but without seeing its home base infringed. Meanwhile, Almeida, in the context of managing the match, used Johnson and Mandalo instead of Pineda and Eliasson, while Al Ittihad maintained the score 0-2 until the end, which still gave them three points. In the final minutes of injury time, Skvarka went on to score the honor goal, but Athanasiades told him “no”.

Best player: Livia Garcia on the two goals he scored and gave AEK the three points, and in the first goal he showed that he is able to respond perfectly as a striker.

At its height: Eliasson was active. It didn’t work out for him in the first half, but he made an excellent assist in the second half with a cross pass to Livia Garcia for AEK to open the score. Also, in the second half, Jasenovic significantly improved his performance, while also hitting the penalty kick with which AEK cleaned the victory.

Weak link: Levadeiakou’s midfield posed no threat to AEK’s defense, except for two moments after 0-2 on Union.

Fatal mistake: Hammond made it in ousting Jasenovic, with AEK scoring the second goal that secured his victory.

Hardcore: Vergites was a correct referee. Zampala summoned him in the VAR to review the penalty stage he referred to due to Hammond’s pointing at Jasinowicz, without changing his decision.

his box magazine: AEK did not meet its well-known competitive standards in the first half, against a Levadeakis team that was far behind. But with the beginning of the second half, Al-Ittihad came with a momentum that it maintained for a long time, during which it scored two goals with the departure of Livia Garcia with the three points. Yellow and Black, except for a period after 0-2, were not threatened and continued their winning streak.

“He’s lying, he didn’t do anything to her,” said the father of the 38-year-old woman who threw the caustic liquid.

Rishi Sunak: Who is the first Indian Prime Minister to Britain?