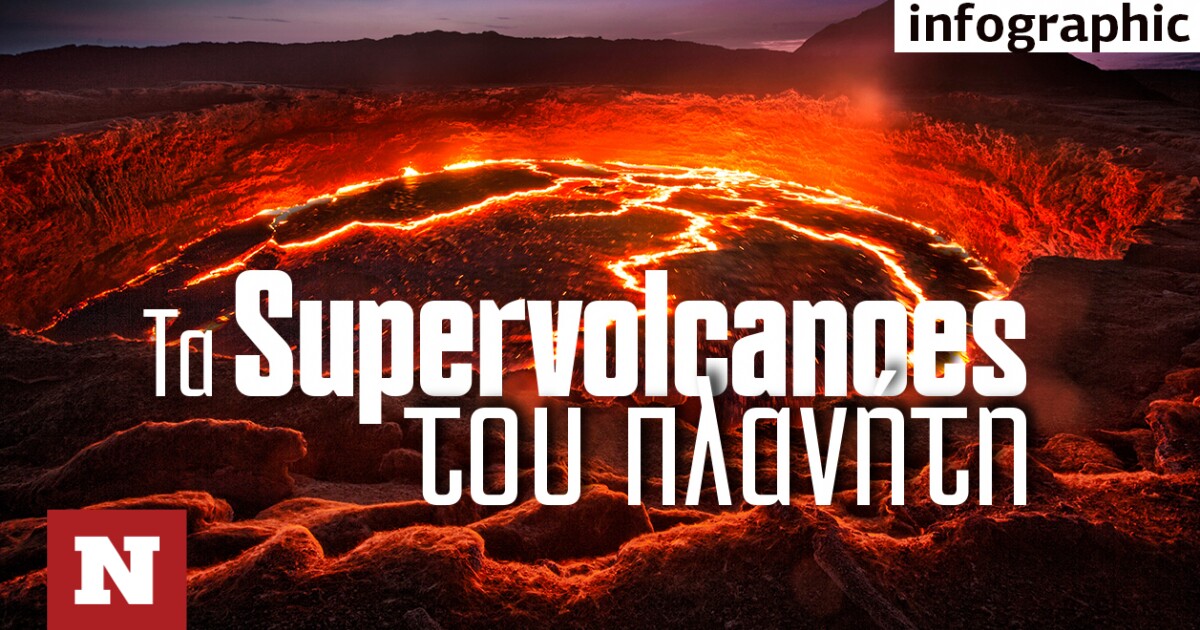 The volcano It always evokes mixed feelings in humanity. Fear prevails, as potential large-scale eruptions may cover lava, ash, earthquakes and disasters, while in some cases when a volcanic eruption does not affect people’s lives, there is an admiration of images seen when lava is thrown into the sky and then flows to the ground.. .

But what happens with volcanoes How many of these do we know? where are they; Are they dangerous to the planet? How does it affect climate change? The questions that reasonably arise to which the scientific community with international research attempts to provide answers.

Supervolcanoes occur when magma in the mantle rises into the crust but is unable to penetrate it. Pressure builds up in a large and growing magma reservoir until the crust cannot withstand the pressure and fracture. This can occur in hotspots (eg, Yellowstone Caldera) or in subduction zones (eg, Toba).

Large-scale volcanic eruptions are also often associated with large igneous provinces, which can cover large areas with lava and volcanic ash. This can cause long-term climate changes (such as triggering a mini-ice age) and threaten species with extinction. The Uranui eruption of New Zealand’s Taupo volcano (about 26,500 years ago) was the world’s most recent VEI-8 eruption.

The term “supervolcano” was first used in a volcanic context in 1949.

Its origins lie in an early 20th century scholarly debate about the geological history and characteristics of the Three Brothers volcanic region in the state of Oregon in the United States. In 1925, Edwin T Hodge suggested the presence of a very large volcano, named Mount Multnomah, in this area. It was believed that many of the peaks in the Three Sisters region were remnants of Mt. Multnomah after being largely destroyed by violent volcanic eruptions, similar to Mt. Mazama. In his 1948 book The Ancient Volcanoes of Oregon, volcanologist Howel Williams brushed off the possibility of Mt. Multnomah, but in 1949 another volcanologist, FM Byers Jr. , reviewing the book and in the review, Byers referred to Mount Multnomah as a supervolcano.

More than fifty years after Byers’ review was published, the term supervolcano was popularized by the popular BBC science television program Horizon in 2000, referring to eruptions that produce extremely large amounts of ejecta.

term megacaldera It is sometimes used in giant caldera volcanoes, such as the Blake River Megacaldera complex in the Abitibi Greenstone belt in Ontario and Quebec, Canada.

Explosions that rate 8 . will Called Super Explosions. Although there is no well-defined lower bound on the explosive size of a “supervolcano”, there are at least two types of volcanic eruptions that have been recognized as supervolcanoes: large igneous provinces and mega-volcanic eruptions.

The Six Most Powerful Giant Volcanoes on Earth

From the most active volcano on the planet, Taupo in New Zealand, to recently discovered volcanoes in Alaska and the Aleutian Islands, giant volcanoes are in Clusters of groups all over the world.

Some of them are especially powerful and expert They are worried About the consequences this might have for the planet if something happened that they didn’t even dare to… think about.

at recent days , illustrated flag, Six of the most powerful volcanoes on the planet were recorded. One of them is the recently discovered supervolcano in Alaska. A group of six volcanoes is located in Aleutian Islands Between Alaska and Russia, the most recent volcanic eruption occurred 600,000 years ago.

Especially famous volcano in Yellowstone from the United States. 630 thousand years ago, its powerful explosion “buried” the entire territory of the United States with the discovery of traces of ash as far as Mexico.

From this list, Italy and Vesuvius cannot be missing, with Campy Fleagri Which is located next to Naples and it is estimated that the well-known volcano has the ability to “bury” all of Europe with lava and ash. This underwater volcano experienced a major eruption 39,000 years ago but never had a strong eruption.

In North Korea “giant” picto He sleeps quickly, however, experts are of the opinion that nuclear tests taking place in the wider region are likely to “wake him”. According to the calculations of experts, it can cover half of Asia with ash and fully reflect the climate of the northern hemisphere. A powerful eruption of a volcano recorded 2100 years ago occurred, but without serious consequences.

The volcano is also famous Toba, Which 74,000 years ago had put the Earth in a “freeze”. This volcanic eruption on an Indonesian island is considered to be the most dangerous eruption on the planet in the last 2,000,000 years. It is estimated that it darkened the world for years and caused the global temperature to drop by 10 degrees!

How vulnerable is the world to supervolcanoes?

According to the scientific community, there are on this planet 25 volcano of this category. The most recent addition to this list is that of Alaska and the Aleutian Islands. However, scientists believe that they have not yet identified all volcanoes 8 . will In the world. But they point out that a supervolcano is one of the most destructive phenomena in nature, it is able to “hide” the sky for decades or change a continent forever.

This is the reason why scholars continue to do so “Survey” Planet to discover the most explosive volcanoes, which gather intense energy hundreds of kilometers underground, in the red-hot mantle of the planet. The research revealed by the geologist is indicative John Power With 13 colleagues, reported the volcano in the Aleutian Islands. The VEI 8 eruption of this volcano could bury Alaska and Canada in ash and create ice in the Northern Hemisphere. This will greatly increase the temperature of the rest of the planet, making it current climate crisis To look like… guilt.

According to a Science Illustrated article, geologists consider the risk of a VEI 8 eruption to be extremely low. Geological studies Ben Mason In 2004 they spoke of “reassuring” Average gap of 800,000 years Between explosions of this intensity. However, in 2017, a group of British geologists reported after their own research that the average time between supereruptions could be less than 17,000 years.

Therefore, according to the latest published studies, the risk of an eclipse is five to ten times higher than the risk of meteor showers on Earth. Protection scenarios for . have already begun to be considered How will the planet stop the destruction of the supervolcano.

Geologists and engineers are investigating how to limit or delay such eruptions. One of the methods they have developed is to drill holes in the magma chamber of volcanoes, so that the explosive gases are gradually removed, resulting in to reduce the risk VEI 8 explosion.

The scientific community, however, continues to search for volcanoes and super volcanoes, To discover a way to mitigate its impact or to accurately predict any eruption. As noted in the related analysis in Science Illustrated, if there is no effective way to prevent eruptions, there is nothing more than preparing the planet Decades of climate confusion…