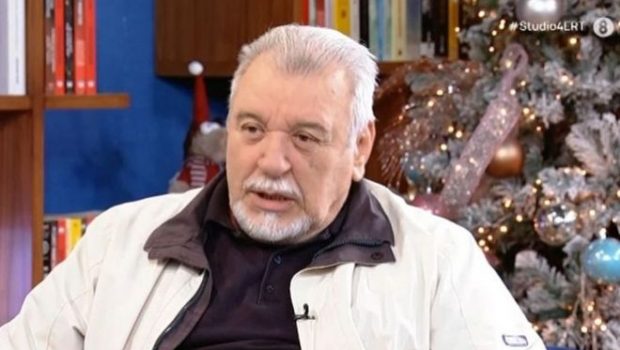 A guest on ERT’s “Studio 4” program was, Tuesday noon, o Tasos Chalkias Who talked about his first steps in the field of acting, and about the new generation of actors and directors, while sharing a touching story about his grandparents.

Referring to the program “Circle of Lost Poets” in which he was the protagonist, he spoke of “hopeful youth”—since the actors are young children—and the way he approaches his role. “I’m one of those actors who doesn’t care if I’m accused of stealing something from someone’s role in my show. And it’s usually not easy to steal, and we don’t steal after all. Even if we do something in a traditional way, that’s creative theft. You have to,” said the well-known actor. to pass it on to you and apply it to your discourse.”

Tasos Chalkias: That is why I turned away from the ark of the world

The amazing story with his Turkish grandfather

Tasos Halkias talked about meeting his grandparents, his mother’s relationship with his grandfather, and his own attempt to find him when he was in Istanbul, in a story similar to a TV script.

My grandfather was Turkish and my grandmother was Christian and they did not marry. It was not very easy in the 1920s, Hellenism flourished in Constantinople and at a very high level, similar to that of Smyrna. There have always been problems at the level of communication between the two religions. They were never together. “They fell in love, became my mother, but they were never together,” said Tasos Chalkias.

“When I went with the National Theater to a performance in Istanbul, I searched for my grandfather with the data I got from my mother’s information. He was in the heart of Anatolia because he had shops in the central vegetable market in Karsi. He was alive but he is not there now. A few years later My grandfather’s daughter looked for me and found me. He came to the show I was playing in Thessaloniki. He lived in Thessaloniki and looked for my mother every day. But my mother did not want to see her, “he described the well-known actor.

“My mother knew him from the pictures. He hated him as much as you can hate the man through the picture. My grandmother gave her the information to find him in my town, not my mother, who didn’t know because she might have excluded me. When you were told that when you were 7 months old and you were swinging in A hammock to sleep and you had something like a baby and I cried and your other kicked you, you turned over and left the bed… I found out this happened from your father’s leg, you couldn’t tell… I wanted, I was curious to know who this guy was, who could kick an infant, his child To see in his face who he is even if you are like him.”

“My grandmother is my first mother and always will be. He was a rare man. With humor and sex that weren’t allowed then. He had a very free spirit.”