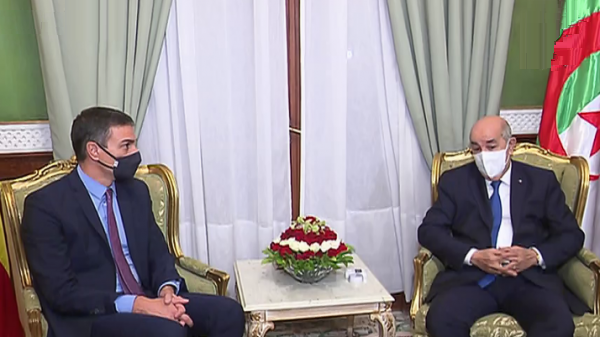 Believing that it could make Madrid reconsider its sovereign decision to support the Moroccan plan for autonomy for the Sahara, the Algerian regime was humiliated by canceling the measures to suspend foreign trade with Spain, Thursday, July 28th.

Delusions of grandeur and rash and hasty decisions can only lead to humiliation. The Algerian regime, whose attempts to impose trade sanctions on Spain failed, has just discovered that its price is the price.

Since the announcement, on March 18, of the historic Madrid decision recognizing that the solution to the dispute over the Sahara lies in the Moroccan autonomy plan alone, the Algerian regime has been in hysterics. His many gestures and attempts to get Spain to reconsider its sovereign decision were in vain and only helped strengthen the position of New Spain (government and parliament) on the Moroccan nature of the Sahara.

Whether it was gas blackmail, the recall of the Algerian ambassador in Madrid, the suspension of the 2002 Algerian-Spanish Treaty of Friendship, Cooperation and Good Neighborliness, or the suspension of the domicile of banks on the same day regarding imports and exports from and for Spain, all these actions left Spanish decision makers unaffected and strong in support of the European Union, and in the sovereign and legitimate nature of their foreign policy orientations.

Thus, it is now clear that the Algerian regime is the same that gave the order, on June 8, to the Association of Algerian Banks and Financial Institutions (ABEF) to suspend bank domiciliation centers related to trade with Spain.

But after a severe and immediate warning from the European Union the following June 10, and with the purpose of extricating itself from the quagmire in which it had stumbled on its own, the Algerian regime instructed its ambassador in Brussels to reject any trade sanctions. For his part, against Spain. A press release issued by the Algerian Ministry of Foreign Affairs, on June 12, 2022, also confirmed this humiliating retreat from Algerian President Abdelmadjid Tebboune, who announced the severance of relations with Spain.

The most surprising thing is that just a week ago, on July 23, 2022 to be exact, ABEF issued a new note suggesting, at least from reading its headline, that there had already been, since June 8, “a freeze on the bank’s localization of foreign trade operations of products and services from and to Spain. But this freeze is not retroactive and does not relate to business operations “established before 09 June 2022”, nor “goods from Spain or of Hispanic origin shipped before 09 June 2022”. 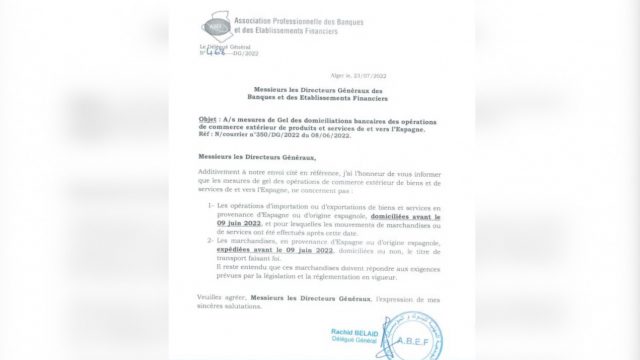 Less than five days after giving the impression of leaving the ballast in relation to Spain, and without the slightest explanation, the same ABEF publishes a new note announcing this time to Algerian banks the complete cancellation of all measures preventing foreign trade with Spain. .

Thus, in its summary note on Thursday, July 28, ABEF announced that at the end of the organ assessment process (…) and in consultation with foreign trade actors, precautionary measures (…) are no longer valid.

See also  Towards the establishment of the African Women Writers Association 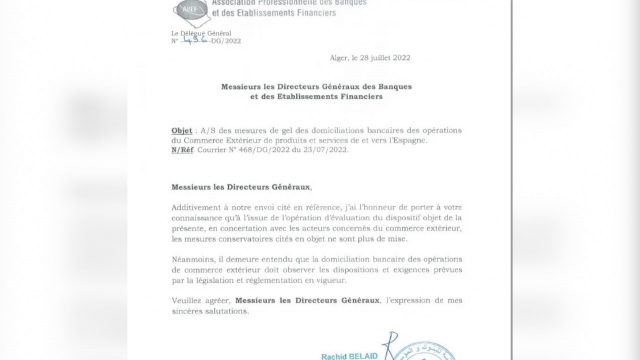 Only one month and 20 days after the real, false decision to suspend trade (except for natural gas) with Spain, the Algerian regime is backing down and planning a return to normalcy with Spain, without the latter giving up one iota of its historical position regarding the Moroccan Sahara.

This humiliating retreat reminds us of the shortcomings that France suffered, in October 2021, when Algeria recalled its ambassador in Paris and closed its airspace to French military aircraft, following the statements of French President Emmanuel Macron, and its facts about Algeria, and honestly restoring the faded image. The Algerian regime is sending itself to the rest of the world. “The official history of Algeria has been completely rewritten,” “Was there an Algerian nation before French colonization?” “The Algerian regime is tired, the movement has weakened it,” “The political-military system is built on souvenirs,” have brought down the French president.

Emmanuel Macron has never reconsidered his statements about the “political-military regime” pervasive in Algeria and even less expresses his regret or apology. After making gestures and hinting that a crisis would open with France, the Algerian regime restored its ambassador to his Parisian position, first slyly and then formally, before Ramtane Lamamra tricked himself into confronting the world with a hug. Non-pessimism and insult with the French president, on February 17, 2022, during the African Union and European Union summit in Brussels.

Skin crisis, reprisals, threats and then return to normal without getting anything in return. The modus operandi of the system that opens crises is not in a position to tolerate it.