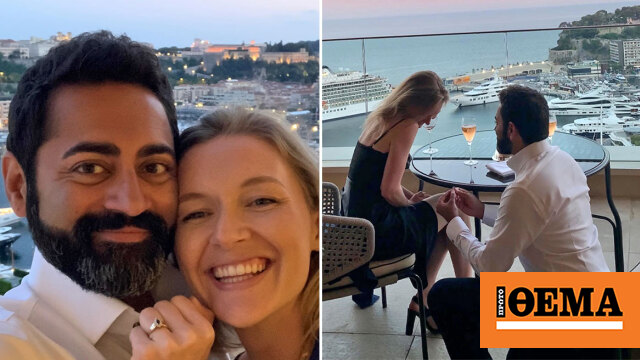 They met at the hotel Saint George Lycabettus Inside Athena And especially… in the elevator. They fell in love and after several moves they decided to plan their joint future and get married.

The reason for her Cheryl Horst And this Preet Banerjee, Although originally from Canada, he has actually lived in other countries as well.

The couple talked CNN Travel About how they met in the summer of 2017, Cheryl, originally from Canada, then a student in her 20s, checked into a hotel and wanted to catch the elevator to quickly get to her room. Breathe, a businessman in his 30s, was already in a lift heading to Athens for a conference. Cheryl even remembers what she was wearing, noting that she was instantly attracted to him, though Breathe says he wasn’t paying that much attention. “The My first impression when he walked in elevator It’s “Oh, a girl with a bag.”».

Both Cheryl as well as Beautiful They were going to the seventh floor with his friends. They realize a common goal when they realize that the elevator they took only goes to the sixth floor. It turned out that there was a different elevator to the higher floors. From the pronunciation it is certain that these are Canadians.

The Cheryl grew up Niagara Fallsto do Canada, But he lived Britain Most of her adult life. The two struck up a conversation and realized they were working on their PhD theses and attending the same conference at the hotel. Preet invited Cheryl to join him for a cocktail reception that evening. When they got out of the elevator, they went their separate ways.

They were happy when they met again at the living room. After a while, Cheryl dismisses him as arrogant as he told her about himself. However the next day, they sit together in a seminar and end up flirting. Despite minor misunderstandings, their chemistry was palpable and at their first joint table they talked for 7-8 hours. However, despite the good company, there were obstacles, as they lived in different countries, were different in age and did not know each other.

On the last day of the conference, Preet announced that he would be coming around Athens By bus, before returning to his base. Although several people initially wanted to go with him, he ended up with Cheryl, the only one who arrived at 9:00 the next morning.

Despite the heat, they didn’t stop chatting because they felt they had a lot in common. But their concerns remained.

After a day of touring, from Acropolis Until then Praeus, They returned to the hotel bar saw in front of them. However, the next day, they had to say goodbye to each other forever. They did not exchange phone numbers or contacts. Cheryl says they thought they spent a few days as friends, but there will be no follow-up.

Cheryl traveled a few months later Canada To see her family. However, he had organized a conference Toronto And Preet also hoped to go see it. So she decided to follow him on Twitter and message him that they were in town.

It was the same when they were discovered. They met and once again never stopped talking, causing them to have second thoughts. They spend time together and find things to talk about.

When Cheryl returned Britain, She received a message on Twitter from Preet, who wrote that he had feelings for her and wanted to know if there was an answer. She didn’t think it would work. After three days, she changed her mind and said she wanted to be with him. As he said, he decided it was worth giving it a chance or he would regret it forever.

The couple began a long-distance relationship using video calls. Cheryl will go to Canada for a longer period of time, while Breathe may go to Britain. The two even met at places around the world where Preet often traveled on business. Both tried to make the most of their limited time, which accelerated the emotional journey.

“I love you” trip

Six months later, over a video call, Cheryl told Preet that she loved him. Breathe felt uncomfortable, causing Cheryl to take it the wrong way.

The next day, Preet unexpectedly knocks on her door because he doesn’t want to return her “I love you”. facetime, But closer.

Although Preet is of Indian origin, the couple does not consider themselves culturally diverse. He jokes that the main difference between them in terms of mindset is Cheryl’s time in Britain and his own Canadian perspective.

Their interests also diverge as Cheryl attends his events formula 1 And Preeth to see his concert for the first time Taylor Swift. However, the couple also share many things in common, such as their dedication to work and studies, their love of travel and movies.

In 2020, the couple managed to live together after three years of long distance relationship Toronto. Cohabitation was not planned as Cheryl landed in Canada when the country closed its borders due to the pandemic.

«“I was on the plane when Canada announced the lockdown.”, says. So the couple, at that time, discussed their future and decided to go London. Finally, when Preet’s visa was approved. at Britain They are planning their new life and their upcoming wedding.

They are officially engaged Toronto During the pandemic. “But there was no romantic or formal proposal.” Preeth says the couple arranged the second wedding plan while they were on holiday in France.

The proposal took place on a rooftop Monaco, Champagne on a balcony. Although Preet admits that he should have proposed in the elevator, the setting was grand. “It would be too poetic. I’m not that creative“, he said.