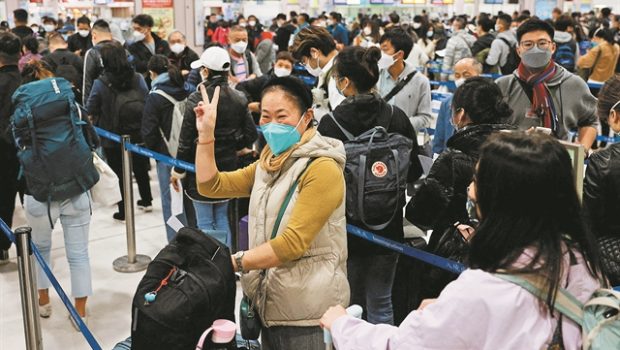 Long lines formed yesterday outside the passport renewal offices in China After the removal of Covid controls at the country’s borders, which have largely kept 1.4 billion of its citizens out To travel for three years.

Lifting those restrictions is one of China’s latest moves to end the “zero Covid” regime, which began last month after historic public protests against continued quarantine.

China’s currency and stock markets rose yesterday as investors bet that reopening could help revive a $17 trillion economy suffering from the slowest growth in nearly half a century.

Beijing’s move to remove quarantine requirements for those entering the country is expected to boost overseas travel because Chinese people will not face such restrictions when they return.

But flights are scarce and many states are asking visitors from China to test negative in an effort to reduce cases — locally, hospitals are overwhelmed, as are morgues. China also requires travelers to take a negative test for Covid before departure.

Top Chinese health officials and state media have repeatedly said that Covid infections have peaked across the country and downplayed the threat now posed by the disease.

In an article praising the government’s virus policies late yesterday, the Communist Party’s official newspaper, Likee Emerasia, said, “Life moves on again!” “Today the virus is weak and we are stronger.”

Officially, China has reported 5,272 Covid-related deaths as of January 8, one of the lowest death rates from the disease worldwide.

But the World Health Organization said the figures announced by China do not reflect the true picture, and virologists from around the world estimate that more than a million people in the country could die from the disease this year.

Experts wonder what made the Chinese authorities abandon the zero-Covid policy. Historian Thierry Fulton writes that the dangerous factor was the deteriorating economic situation.

Three years of blockade cut off China from the rest of the world, leading to a collapse in trade and a decline in production. Official estimates for this year indicate a growth of 3%, which will certainly lead to a significant increase in unemployment. After the reforms of the 1980s, the Communist Party built its credibility on economic success. In the event of a decline in growth, the party loses its credibility, especially with the middle class, which constitutes 25% of the population.

This is the middle class that emerged in December, as the lockdown led to the loss of many of its benefits, especially travel abroad. So the party had to urgently change its policy.

Fulton notes that there is another scenario, one that is more pessimistic and extreme.

“Xi’s dream of seeing his country lead the world in the coming years has been dealt a severe blow by the pandemic. By lifting the restrictive measures, the Chinese president may be trying to set the rest of the world back three years, when that ambition seemed realistic. The Chinese authorities abhor capitalism, which they see as responsible for All ills. So they do not see with bad eyes to retreat, not to recover the land they have lost, but to plunge the whole planet into a new health crisis, less deadly but crippling.”