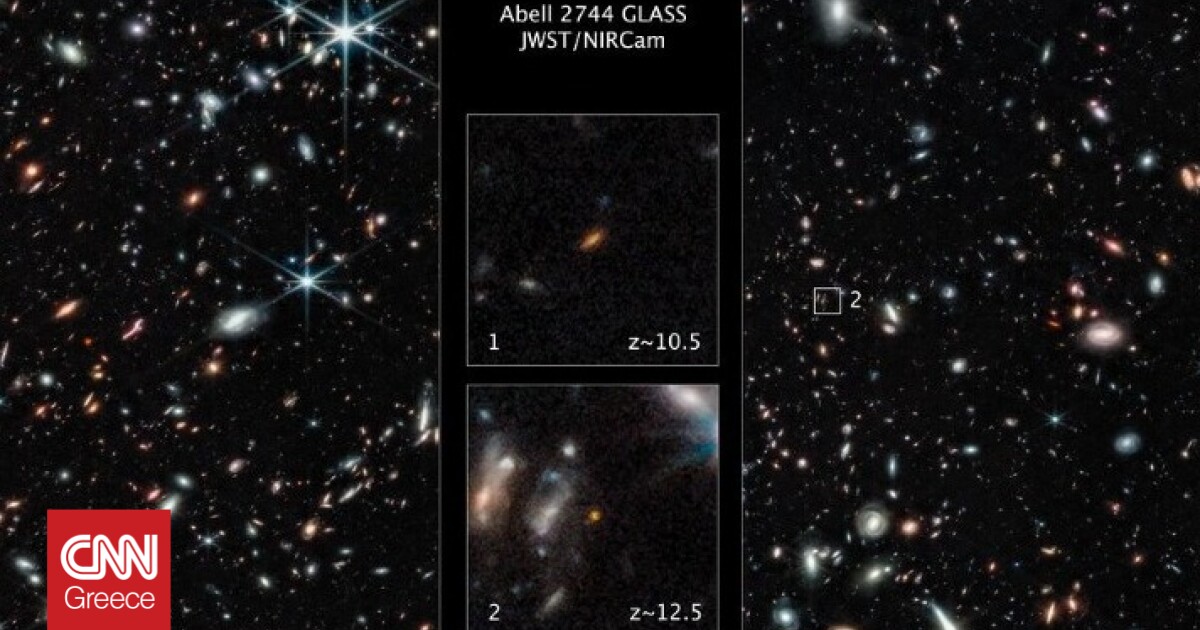 Two of the oldest, far and unexpectedly bright galaxies In the universe he found the space telescope James Webb As announced by the American and European space agencies (NASA and ESA).

The two galaxies are among the oldest and most distant of all.

estimated that they have ages Only 350 and 450 million years, respectively, after the initial “Big Bang” (the great explosion) who created the universe. The current record holder for distance in time and space was a galaxy that existed 400 million years ago after the Big Bang and was found 2016 From the Hubble Space Telescope.

The high brightness of the two relatively small but very young galaxies is a mystery to scientists. The two galaxies were until now “invisible” to other, less powerful telescopes. Observing the light of very distant celestial bodies, which have made a long journey to Earth, means that astronomers simultaneously see what existed in the distant past.

The researchersLed by Marco Castellano of the National Institute of Astrophysics in Italy and Rohan Naidoo of the Harvard-Smithsonian Astrophysical Center, USA, they published related publications in the Astrophysical Journal Astrophysical Research Letters, while NASA also held a related press conference on Discovery. James Webb’s new observations led astronomers to conclude that in the early days there were an unexpectedly large number of galaxies that were much brighter than expected.

“Everything we see is new. Webb shows us that there is a much richer universe out there than we ever imagined. Once again our universe Surprised. These early galaxies are unusual in many ways. “It’s very different from our galaxy or other large galaxies we see around us today,” said Tommaso True of the University of California, Los Angeles (UCLA).

“These observations just make your head explode. This is a whole new chapter in astronomy. It’s like an archaeological dig, when you suddenly find a lost city or something you didn’t know anything about,” said Paola Santini of the Rome Observatory.

“Although the distances of these early galaxies need to be confirmed by spectroscopy, their extreme luminosity is a real puzzle and a challenge to our understanding of galaxy formation,” noted Pascal Oss of the University of Geneva.

“We found something incredible Wizard. These galaxies were supposed to start forming only 100 million years after the Big Bang. No one expected the Dark Ages to end so quickly. “It’s very impressive to see such bright galaxies at such early ages,” said Garth Illingworth of the University of California, Santa Cruz.

The cost Launched last December, the $10 billion James Webb is the largest and most powerful telescope ever sent into space, orbiting the sun 1.6 million kilometers from Earth.