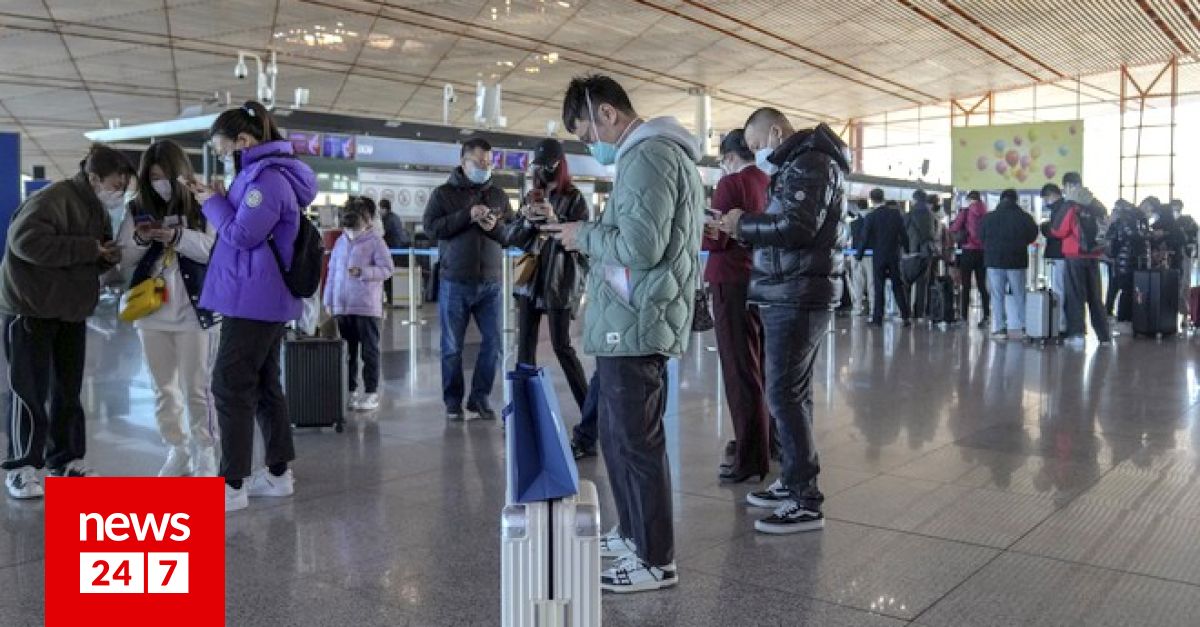 As long as the Chinese pack … bags for Europe, that’s it The old continent’s anxiety is growingSeeing the new wave of coronavirus spread to the Asian country, but also the wave of travelers arriving in many European Union countries.

It is noteworthy that the Chinese authorities announced last Tuesday that the country will do so Stop asking travelers arriving from abroad to quarantine from 8 Januarywhich encouraged many Chinese, who had been cut off from the rest of the world for a long time, To enter the travel platforms.

can the Chinese people To welcome the news enthusiastically, Rush to book plane tickets abroad After three years of isolation due to Covid, in Europe there is great concern due to the outbreak and possible uncontrolled imported cases on the continent with the arrival of tourists from China.

Mandatory testing in Italy, followed by France – an emergency meeting at the Commission today

After the abrupt end of politics “Zero COVID” In China at the beginning of the month, which led to a very large wave of infections in several states frank concern About the dangers of spreading new variables from the giant Asian country to the rest of the world SARS-CoV-2.

Already, the Italian Ministry of Health has ordered all travelers from China to be screened upon their arrival in the country. The news was brought by the Minister of Health, while the decision was made after the alarming Chinese epidemiological data.

At the same time, French President Emmanuel Macron demanded “measures intended to protect” the French from his government, which confirmed that it was “watching the development of the situation in China very carefully.”

Paris says it is “ready to consider all useful measures that can be taken”. In consultation “with its European partners” and “within the legal framework that exists today”.

At the same time, European Commission met extraordinary meeting Today in order to discuss possible measures to obtain a coordinated approach of the EU member states in the face of cases explosion of the new coronavirus in China.

In view of the epidemiological situation in China“The commission is organizing this morning a meeting of a special committee composed of representatives of 27 health ministries,” a spokeswoman told AFP.

The aim is “discussion with EU member states and (health) services Possible actions for a harmonized European approachhe explained.

According to the APE-MPE report, the European Commission wants to avoid the possibility that some EU governments will act like lone riders, adopting border restrictions without coordination, just as they did in the first phase of the pandemic, in the spring of 2020.

at the beginning of the month, Following a proposal by the Commission, the 27 agreed to abolish all restrictions on entry into the European Union Travelers from so-called third countries, in other words to return to a pre-pandemic state.

However, the possibility of re-imposing the measures in a “coordinated manner” is reserved, should the epidemiological situation so warrant.

“alternative BF.7 by Omicron and is mainstream in China It is already present in Europe and does not show a significant increase. However, we remain vigilant “We are ready” for restrictive measures Again “if necessary,” explained the representative of the European Commission.

However, the alarm has been sounded in many other countries as well. The US government is considering imposing new measures on travelers coming into the country from China due to the… Its concern about the “lack of transparent data” from Beijing about the course of the novel coronavirus pandemicUnnamed US officials told Reuters and Bloomberg News on Tuesday (27/12).

Other countries have already announced in the past 24 hours that they are taking new measures regarding travelers from China due to the outbreak infections In the Asian giant with a population of 1.41 billion. India, Taiwan and Japan They will need a negative COVID test for travelers from mainland China, as those who test positive in Japan will have to spend a week in quarantine. The imposition of diagnostic tests is also being considered Filipino.

See also  Souls' resounding message to Turkey: "Contest for sovereignty by a NATO partner is unacceptable"

Tokyo also plans to place restrictions on airlines that want to increase their flights to China. He announced that all travelers arriving from China would be required to be tested for SARS-CoV-2. Kuala Lumpur announced that it will introduce new tracking and monitoring measures.

Concerns about injuries and cases – Hospitals, burial homes and crematoriums are overflowing

At the same time, official official statistics for the seven days up to last Monday (26/12) reported that there Just one death due to complications from COVID-19, while hospitals and funeral homes in China were overwhelmed.

China announced that it recorded on Tuesday (27/12), Three new deaths Due to COVID complications, the numbers Don’t agree with what funeral homes sayas well as with the experience of countries with much smaller populations when pandemic restrictions were lifted.

Experts and citizens’ concern about the reliability of the data, unrelated to the experience of other countries, with much smaller populations, is intensifying now that they have reopened their economies.

Chinese Hospitals and funeral homes have been overwhelmed Today due to the intensification of the COVID-19 wave, while the extent of the outbreak and doubts about official figures have prompted some countries to consider new travel rules for Chinese visitors.

In a sharp policy shift, China began this month It “removes” the most stringent measures in the world to combat the Corona virusputting its battered economy on track for a full reopening next year.

According to some foreign experts, the lifting of restrictions, which came after widespread protests against the measures, means that the coronavirus is spreading largely unchecked and may infect millions of people daily.

The speed with which China lifted its COVID rules led to its practice Great pressure on the fragile health system.

Staff at Huaxi Grand Hospital in the southwestern Chinese city of Chengdu said they are “Too busy” With COVID Patient Care. “I’ve been doing this job for 30 years and it’s been the busiest time of my life ever”An ambulance driver outside the hospital said.

There were long lines at the hospital’s emergency department and fever clinic last night. Most of those who got there were given oxygen to help them breathe better.

“Almost all patients have COVID”said one of the pharmacy employees in the emergency department. according to her, The hospital has run out of supplies For certain COVID preparations, patients may be given medications for symptoms such as a cough.

Car parks around Dongjiao Funeral Home, one of the largest car parks in Chengdu, were full. Memorial ceremonies are held one after anotherAs smoke rises over the crematorium.

«We must do this about 200 times a day now»said one of the workers. “We are so busy that we don’t have time to eat. And this has happened since the measures have been relaxed. Before that it was 30 to 50 times a day.”

“Many people have died of COVID”another employee said.

At another incinerator in Chengdu, Nanling, staff have been just as busy. “There have been a lot of deaths due to COVID lately.”said one of the workers, adding that there are difficulties in determining the dates of the cremation.