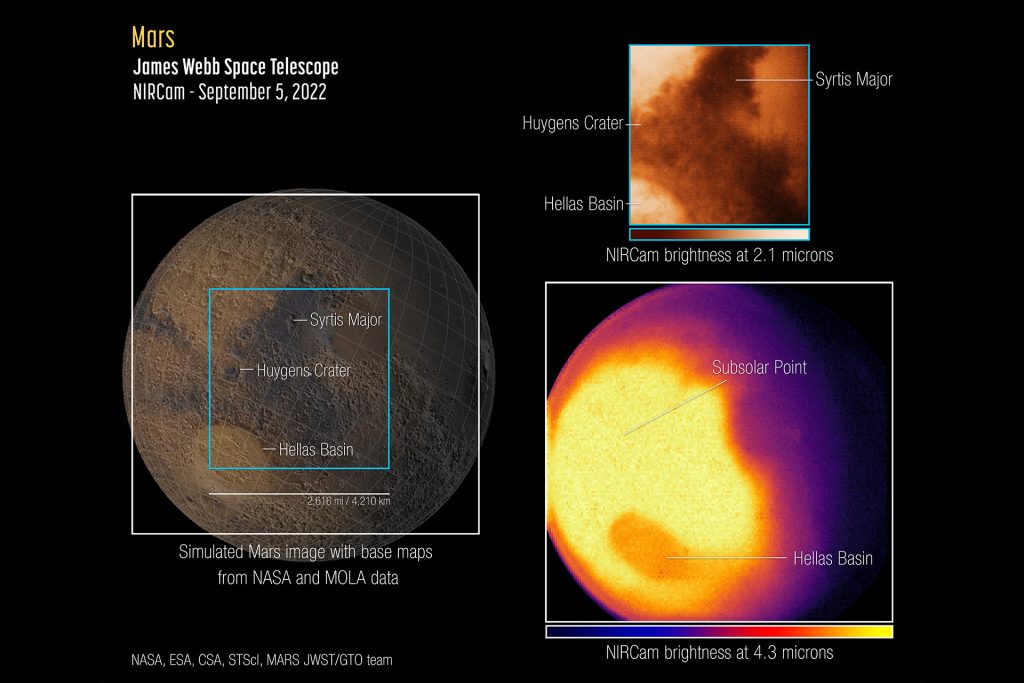 The James Webb Space Telescope still captures for the first time Pictures of the planets of the solar systemAnd the last installment can be especially helpful. At NASA and the European Space Agency subscriber The early images of Mars were taken on September 5th, which promise new insights into the planet’s atmosphere. The data from the Near Infrared Camera (NIRCam) already offers some surprises. For starters, the Hellas Giant Basin is strangely darker than nearby areas at the hottest time of the day, NASA’s Giuliano Liuzzi and Space.com pointed – Higher air pressure at a lower elevation of the aquarium reduced heat emissions.

The JWST images also gave space agencies an opportunity to share the composition of the near-infrared atmosphere of Mars using the telescope’s onboard spectroscopic array. The spectral “map” (pictured in the middle) shows the planet absorbing carbon dioxide at several different wavelengths, as well as the presence of carbon monoxide and water. A future paper will provide more details about the chemistry of the Martian air.

It was particularly difficult to record images. Mars is one of the brightest things the James Webb Telescope can see—a problem for an observatory designed to study The farthest thing in the universe. The researchers counteracted this by taking very short exposures and using special techniques to analyze the results.

This is only the first wave of images and data. It will take more observations to reveal more about Mars. However, the spectroscopic information is already hinting at more information about the materials of the planet. Liuzzi also believes that JWST studies could resolve disputes over the presence of methane on Mars, which could indicate that the Red Planet harbored life in its distant past.

All products recommended by Engadget are handpicked by our editorial team, independently of our parent company. Some of our stories include affiliate links. If you buy something through one of these links, we may earn an affiliate commission. All prices are correct at the time of publication.