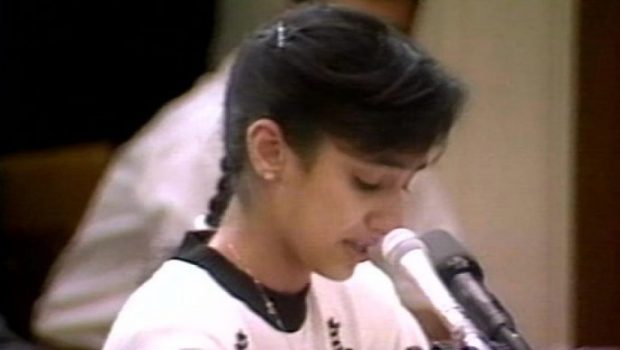 Although the Gulf War officially ended in 1991, the US war against Iraq continued for decades. Despite efforts and millions of dollars, the Americans protested that their men were sent to a distant land. After all, the Soviet Union had just collapsed and they thought the free world was now safe.

There is a 15-year-old girl from Kuwait. Najira, in 1990, appeared before the Human Rights Committee on Capitol Hill. She shocked the international community with her chilling testimony: Iraqi forces killed 312 children. Three months after her dismissal, President George W. Bush invaded Iraq.

Najira’s allegations turned out to be nothing more than a well-crafted and convincing lie. But it was too late.

Najira presented herself to Congress as a young nurse who volunteered at Al-Adan Hospital in Kuwait. They did not release her last name to protect her family back home. This was just a window decoration. No one bothered to find the truth. Najira was no ordinary Kuwaiti teenager.

Najira Al-Sabah, daughter of the Kuwaiti ambassador to the United States of America. He was trained by public relations firm Hill & Knowlton, which has worked with the Kuwaiti government. The Democratic head of the Human Rights Caucus and the only Holocaust survivor who served in Congress knew all about it.

He never admitted it. After the truth was revealed, Landos called for ignorance – and insisted on the human rights violations taking place in Kuwait. The journalist who first saw the lies of Najira Al-Sabah spoke about them in Democracy Now!

“Hill & Knowlton chose her to be an inexhaustible witness to these atrocities. This was all part of a campaign to turn Saddam Hussein, at least in the public mind, into Adolf Hitler. They couldn’t sell the Gulf War without her. In other words, they had to cheat to win.”

Najira’s account of what she was supposed to have seen cooled the audience’s blood. Iraqi soldiers removed 312 children from hospital incubators and left them to die. “If my nephew had been born prematurely that day, he would have died by now,” she said, with a trembling voice in a room full of reporters.

“Mr Chairman and members of the committee, my name is Najira and I just came from Kuwait. My sister traveled with my 5 day old nephew across the desert to rescue her. In Kuwait, there was no milk available for the baby. They barely managed to escape when their car got stuck in the desert sands and help came From Saudi Arabia. I stayed behind and wanted to do something for my country. In the second week after the invasion I volunteered at Al Adan Hospital with 12 other women. I was the youngest volunteer, and the others were between 20 and 30 years old. While I was there I saw Iraqi soldiers entering The hospital with guns. They took the children out of the incubators, they took the incubators and let the children die on the cold floor. It was so scary. I can’t help but think of my nephew.”

The testimony was broadcast throughout the country. It was a turning point for public opinion about the war in Iraq. President George W. Bush has invoked her claims time and time again. Major publications such as the New York Times and human rights groups such as Amnesty International have echoed her concerns.

The American people were divided over whether troops should be deployed to liberate Kuwait. 1990 Gallup polls found that only 17% of the American public supported immediate military intervention in August. This percentage rose in December to 41%.

Najira’s story turned the balance before the vote on January 12, 1991. On that day, the Senate voted 52 to 47 to authorize US military force in Iraq. At least 7 senators cited the infamous testimony to justify their position.

The decisive vote finally gave Bush the political support he needed to “save Kuwait”… and its precious oil fields.